Please ensure Javascript is enabled for purposes of website accessibility
Log In Help Join The Motley Fool
Free Article Join Over 1 Million Premium Members And Get More In-Depth Stock Guidance and Research
By Keith Noonan - Feb 5, 2021 at 9:03AM

The Biden administration could bring big wins for the electric vehicle industry.

Shares of Nikola (NKLA -7.09%) rose 51.3% in January according to data from S&P Global Market Intelligence. The company's stock posted big gains thanks to momentum for the broader electric vehicle (EV) space and signs that the U.S. government will help accelerate the industry's growth. 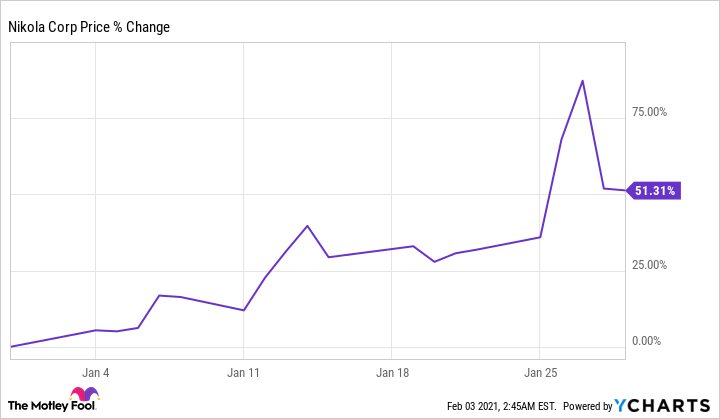 Nikola stock gained ground after the U.S. Department of Energy announced it would be funding hydrogen fuel cell technology research, an area that's central to the company's growth. The stock also gained on news that President Joe Biden plans to replace the United States' national auto fleet with electric vehicles. Shares are now up roughly 136% year to date, and evidence of mounting federal support for the EV industry helped power gains for Nikola and other leading players in the space last month.

Even with its impressive gains over the last year, the company's share price is down roughly 74% from the 52-week high it hit last summer. Nikola stock surged to nearly $94 per share in June after the EV specialist said it would start taking reservations for its Badger pickup truck, but the company's share price trended lower after a planned partnership General Motors failed to materialize. Federal support for the EV industry has revitalized Nikola's growth story, but investors should keep in mind that the company's outlook remains speculative.

Nikola stock has continued to gain ground early in February's trading. The company's share price is up more than 5% in the month so far. 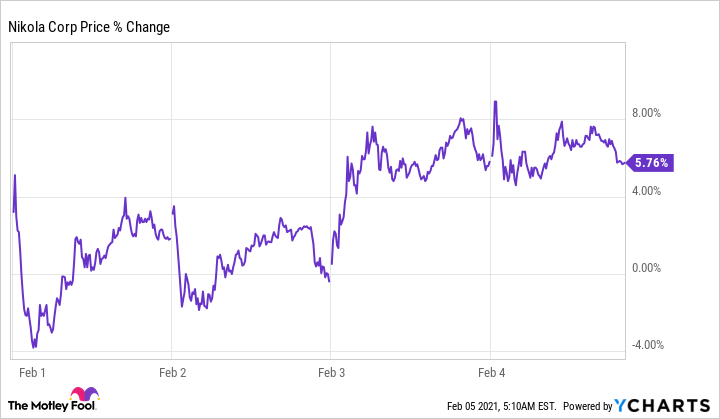 Nikola now has a market capitalization of roughly $9.4 billion and is valued at approximately 150 times this year's expected sales. That's an incredibly growth-dependent valuation and reflects the fact that the company is at early growth stages and is still in the process of winning the contracts needed to establish meaningful market share in its corner of the auto market.

Valuations for EV companies remain hotly contested. Nikola's focus on hydrogen technologies has the potential for huge payoffs, but investors should know that backing the company remains a high-risk, high-reward play even with evidence of mounting federal support.