Please ensure Javascript is enabled for purposes of website accessibility
Log In Help Join The Motley Fool
Free Article Join Over 1 Million Premium Members And Get More In-Depth Stock Guidance and Research
By Billy Duberstein - Feb 8, 2021 at 6:45AM

These companies just delivered strong earnings, but their stocks are still undervalued.

The tech sector has really been the place to be in the market's recent past. Over the past decade, a wave of technology disruption has changed all of our lives dramatically, powered by smartphones, cloud computing, and powerful internet platforms. No surprise, the tech-heavy ETF Invesco QQQ Trust (QQQ -3.05%) has massively outperformed the broader market: 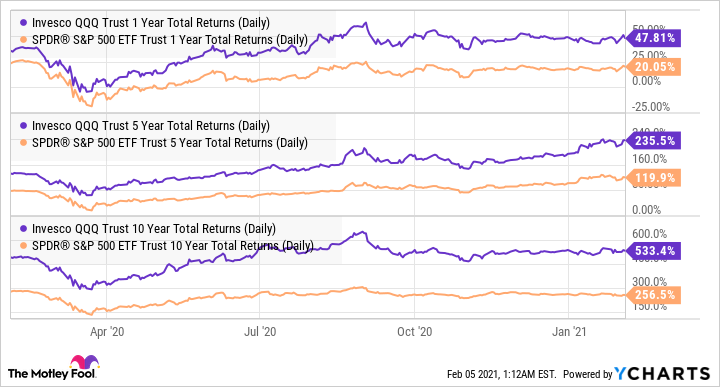 Despite tech's massive rise, there are still great values to found in the sector today. Here are three great tech businesses that belong on your buy list. 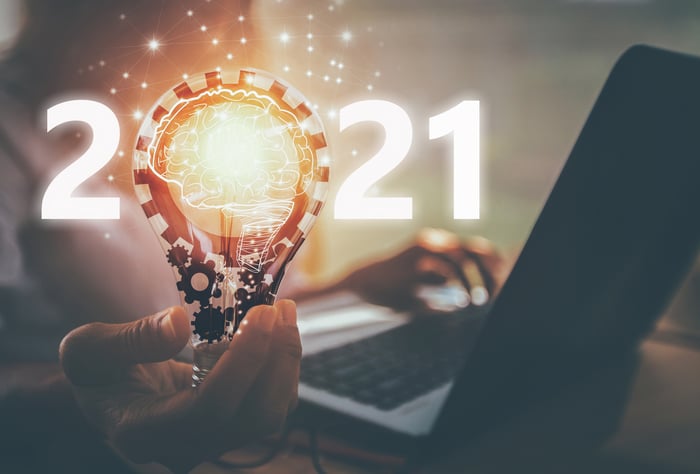 Sure, Alphabet's stronger-than-expected 23% revenue growth and massive earnings outperformance were nice to see as the company recovered from COVID-19 headwinds. But the real story was the first-ever disclosure of Google's cloud unit profitability.

On that end, Google Cloud is racking up pretty hefty losses -- much more than I expected:

So why did Alphabet's stock surge higher, if the cloud unit is burning more cash than thought? Because that means the "core" businesses -- Search, YouTube, Play store, and hardware -- are all much more profitable than investors may have thought. Those businesses collectively made a whopping $54.6 billion in operating income last year, up 11.4% over 2019. But remember, the COVID-19 pandemic severely impacted results in the first two quarters of the year. For the fourth quarter, those businesses grew operating income a whopping 41% over the fourth quarter of 2019.

Likely, investors boosted Alphabet's stock after earnings because they value the core businesses off of earnings, yet still value the cloud business off of sales. Since the core business is more profitable, investors may value it higher, while the value for the cloud business likely didn't change that much. After all, many high-growth cloud software stocks are also racking up hefty losses, but investors have nonetheless bid them up to high valuations anyway due to strong revenue growth.

Alphabet's $1.39 billion valuation is only 25.4 times the core Google services operating income for 2020, which would actually be a fine valuation based on that business alone. Yes, the cloud lost $5.6 billion, and Alphabet's moonshot "other bets" segment, including Waymo and Verily, burned another $4.5 billion. Still, both of those segments likely have significant positive value.

Considering that you are basically getting these huge loss-making businesses for free and Alphabet still looks like a solid value even after its post-earnings pop.

T-Mobile (TMUS -2.57%) reported strong fourth quarter results last week, yet the stock slipped a bit in the aftermath. Why? Potentially, investors may have been underwhelmed by the company's guidance for 2021 after a monster 2020 that saw T-Mobile's stock rise 72%. 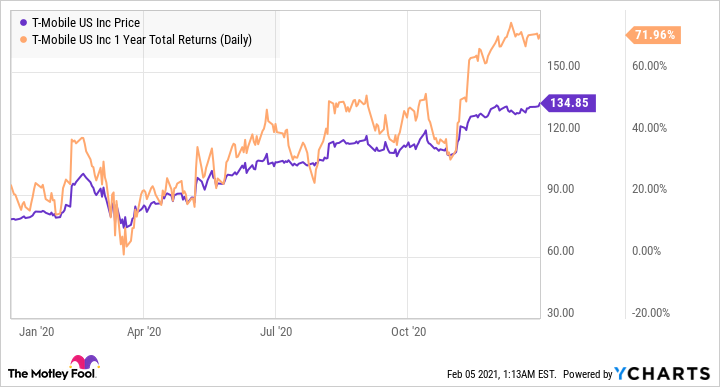 Still, T-Mobile's guidance for 4 million to 4.7 million net postpaid additions in the upcoming year would still be pretty strong. After all, its 5.6 million net additions in 2020 was the strongest in company history, and the best in the industry. Furthermore, T-Mobile has a history of guiding conservatively and handily beating expectations.

Meanwhile, the noise around full-year guidance is only a distraction from the fact that T-Mobile has a 5G network lead over rivals. Last quarter, T-Mobile exceeded its target of covering 100 million people with high-mid-band 5G spectrum, along with 280 million covered by slower low-band 5G.

That's a big lead over its competitors, and it should be a differentiator as consumers upgrade to 5G phones this year. Combined with billions in upcoming synergies as the result of its 2020 Sprint acquisition, and T-Mobile should see growth and expanding margins, not just in 2021, but over the next several years. Any pullback could be an opportunity for long-term investors.

Another undervalued tech company that just reported earnings is Super Micro Computer (SMCI -3.42%). Super Micro makes customized servers for large data center clients, and that business was disrupted by COVID-19, both from a demand and supply perspective. Last quarter, Super Micro's revenue fell 5% year over year but gained 9% quarter over quarter, showing a recovery from the slowdown earlier in the year.

However, Super Micro is about to ramp sales beyond its original customer base. The company just completed a build-out of its Taiwan campus, which will allow it to produce high volumes of cloud servers at lower costs, opening up the large cloud computing market. In addition, Super Micro is beginning to make servers for the 5G/telco market, winning new customers last year and ramping up to higher volumes in 2021.

Super Micro has seen its revenue momentum stagnate over the past couple of years as it had to deal with an accounting scandal, but the company cleaned up its books and was re-listed on the Nasdaq one year ago. Now, CEO Charles Liang is confident the company can grow again, and promised an upcoming analyst day where Super Micro will outline its goal of reaching $10 billion in revenue. For context, that's more than triple what Super Micro makes in revenue today.

Despite those rosy growth prospects, Super Micro trades at only 10 times its 2022 earnings estimates.That seems way too cheap for a stock with the potential to triple its sales going forward. Furthermore, Super Micro has $270 million in net cash, and just authorized a $200 million share repurchase program, so management is taking advantage while the stock appears to be on sale.