Please ensure Javascript is enabled for purposes of website accessibility
Log In Help Join The Motley Fool
Free Article Join Over 1 Million Premium Members And Get More In-Depth Stock Guidance and Research
By Keith Speights - Feb 8, 2021 at 5:52AM

Strong growth prospects plus a limited downside equal a great stock to buy.

I could readily tick off a list of stocks that I'd consider buying. Several of them would be healthcare and tech stocks that have the potential to generate strong growth.

However, if I had to eliminate all of the stocks from the list except for one, it wouldn't include many high-flying stocks that I really like. The one stock I'd buy right now is none other than Brookfield Renewable Partners (BEP 0.77%). Here are three reasons it's my top pick. 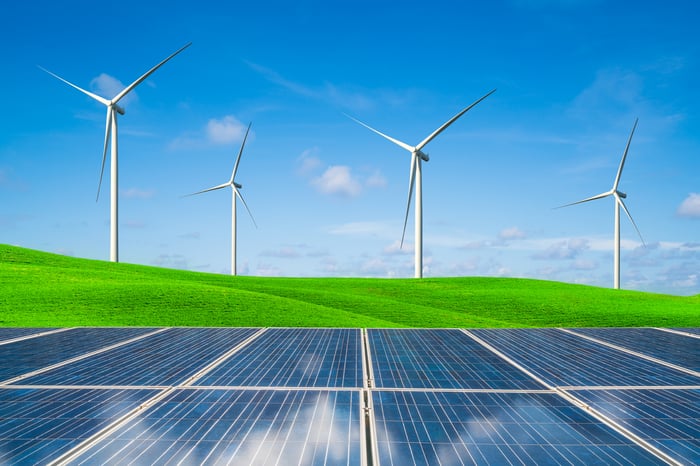 1. The timing is great

There aren't very many sure things in life, much less in investing. Few things even come close. However, I think that renewable energy stocks are practically slam dunks right now. The timing is great for investing in a strong company like Brookfield Renewable.

Several major countries have already committed to drastically reducing carbon emissions. There hasn't been a similar commitment at the federal level to in the U.S. in the past, although a few big states have set ambitious goals. With the Biden administration, though, that's set to change.

President Biden has made addressing climate change a top priority. He wants to put the country on a path to 100% clean energy by 2050 with milestone targets along the way. Solar and wind power is already cheaper than fossil-fuel bulk power generation. I expect the Biden administration to push for carbon taxes that increase the cost-effectiveness of renewable energy sources.

2. The company is raring to grow

Can Brookfield Renewable seize the moment at hand for renewable energy? I think so.

Currently, the company's total installed capacity stands at over 19,000 megawatts. That's up from only around 3,000 megawatts in 2015. However, Brookfield Renewable's development pipeline includes 23,000 megawatts of additional capacity. That's right -- the company is on track to more than double its current capacity.

Brookfield Renewable isn't just raring to grow; it's already growing rapidly. In the fourth quarter, the company's normalized funds from operations (FFO) soared 58.7% year over year to $265 million. 2020 ended as a record year for the renewable energy leader.

The company's distributions are also growing as a result. Brookfield Renewable increased its dividend by 5% after its strong 2020 performance. Including dividend distributions, the company expects to deliver total annual returns of around 15% over the long term.

Sure, other stocks could also be in the right place at the right time to deliver impressive growth. But there's one other thing about Brookfield Renewable that secured its position at the top of my list: It's resilient.

Quite frankly, stock valuations have reached a level where a reckoning is only a matter of time. I'm at least somewhat leery of investing too much more money in the market right now. When the next downturn comes, my hunch is that the hot growth stocks will fall the hardest.

Brookfield Renewable, though, is well-positioned to grow through all economic and market cycles. Much of the company's cash flow is locked in through long-term contracts. No single market accounts for more than 10% of total cash flow. Brookfield Renewable doesn't have a lot of exposure to wild currency swings, either, because of hits foreign exchange hedging.

There's no such thing as a risk-free investment. However, I think that Brookfield Renewable comes about as close as you can get in today's market while still providing excellent growth prospects.