Were you looking for a self-driving company? This isn't it.

Shares of Chinese mobile advertising specialist Aurora Mobile (JG -2.17%) were trading sharply higher on Tuesday. It wasn't immediately clear why, though investor confusion in the wake of a deal announced by another company that shares the Aurora name may have been a factor.

Aurora Mobile did have big news last week, when it announced a partnership with Kuaishou Technology, a fast-growing rival to giant TikTok. That might still be driving the stock higher -- but I suspect that at least some of the buying on Tuesday was a case of mistaken identity.

Specifically, I think it's possible that some investors (or traders, or bots, or all of the above) are confusing Aurora Mobile with Aurora Innovation, a not-yet-public Silicon Valley start-up that has been developing autonomous-vehicle technology.

That Aurora (Innovation, not Mobile) had some big news on Tuesday: It revealed that it signed a multiyear partnership with Toyota Motor and auto-industry supplier Denso to develop and mass-produce self-driving minivans for ride-hailing services including Uber Technologies. 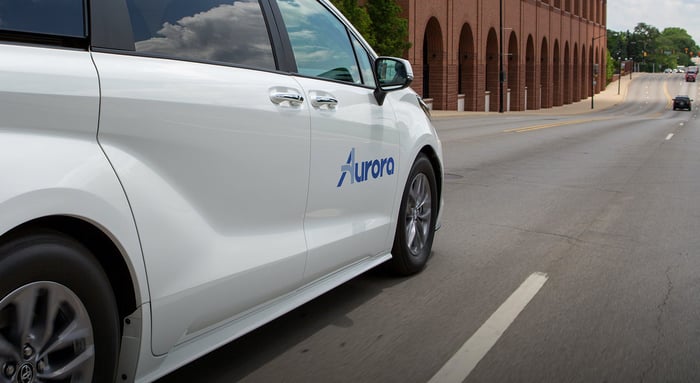 This might be the Aurora you're looking for, but if so it's not Aurora Mobile. Image source: Aurora Innovation.

If Aurora Innovation were a public company, I'm quite sure that its stock would be soaring on that news today. I might even suggest that you buy some. Alas, it isn't, and you can't.

If you're an auto investor who is considering Aurora Mobile's stock because of the Toyota news, please don't click that "buy" button! There may well be good reasons to be bullish on Aurora Mobile, but the deal that Aurora Innovation announced with Toyota today isn't one of them. Trade carefully.

What Is Aurora Mobile and Why Was Its Stock Up Over 60% Today?