Please ensure Javascript is enabled for purposes of website accessibility
Log In Help Join The Motley Fool
Free Article Join Over 1 Million Premium Members And Get More In-Depth Stock Guidance and Research
By Cory Renauer - Feb 9, 2021 at 6:27AM

Can this company's Alzheimer's disease candidate deliver further gains ahead?

Successful results from an Alzheimer's disease study drove shares of Cassava Sciences (SAVA 8.27%) more than 400% higher last week. Then shareholders watched in horror as the biotech stock gave most of those gains back before the end of the week.

Is now the time to sell this biotech stock, or is the reversal a chance to buy more shares at a discount? To find out, let's look at what's next for Cassava Sciences and its Alzheimer's disease candidate. 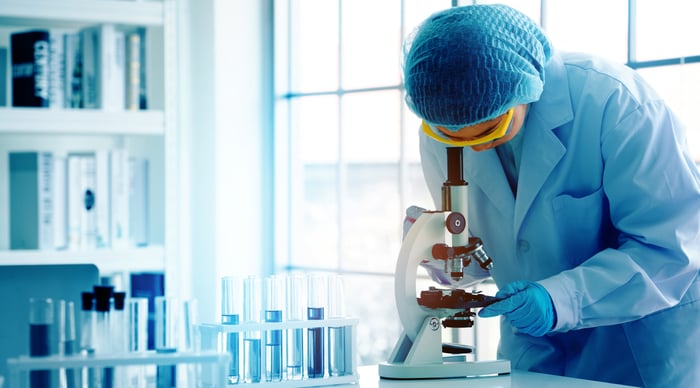 Why Cassava Sciences could rocket higher

Alzheimer's disease affects one in 10 Americans over the age of 65, and there aren't any treatments approved to prevent this progressive disease from worsening. Pent-up demand for an effective Alzheimer's disease treatment could make Cassava Sciences lead candidate, simufilam, the most successful new drug of its time.

Cassava Sciences soared last week after the company reported positive results from a clinical trial with mild to moderately affected Alzheimer's disease patients. Patients showed an average improvement of 10% from baseline after taking simufilam tablets for six months. Cassava Sciences didn't include a placebo group for comparisons, but the company is confident it will succeed in a larger phase 3 study based partly on prior clinical research conducted by another sponsor: Biogen (BIIB -0.12%).

The Food and Drug Administration is currently reviewing a controversial application from Biogen for aducanumab, an experimental protein delivered through regular intravenous infusions. When Biogen ran studies with aducanumab, patients who were given a placebo and a similar test scored 6% worse after six months. The results Cassava Sciences presented suggest, by extension, that simufilam will succeed when run up against a placebo in a larger study.

The clinical trial results that Cassava Sciences reported were interesting, but this isn't the first time we've seen a potential Alzheimer's disease treatment produce impressive data in a small single-arm trial. Cross-trial comparisons with the placebo group from Biogen's study need to be taken with a big grain of salt before we can confidently say simufilam will improve patients' cognitive skills.

The cross-trial comparisons that Cassava Sciences reported are good reasons to conduct a larger phase 3 trial with patients randomized to receive a placebo or simufilam. Given Cassava Sciences' recent history, investors should wait for those results before making any more assumptions about this drug's ability to treat Alzheimer's disease.

Simufilam is a small molecule drug that stabilizes altered filamin A, a scaffolding protein associated with Alzheimer's disease pathology. In 2019, Cassava Sciences reported impressive reductions to patients' circulating levels of tau and other proteins associated with Alzheimer's disease. Last May, though, the company had to admit that investigators couldn't confirm those improvements in a placebo-controlled study.

Simufilam's inability to reproduce successful biomarker data in 2020 doesn't necessarily mean it will fail to provide a significant cognitive benefit when measured against a placebo. Given this company's history, though, it's probably best to take your profits off the table and wait for confirmation.

Formerly known as Pain Therapeutics, Cassava Sciences has been developing new drugs since 1998, but it doesn't have any products to sell yet. That's because the company spent decades funneling investors' money into an ill-fated attempt to develop an abuse-deterrent pain reliever called Remoxy before finally switching gears to focus on Alzheimer's disease in 2019.

It could take a couple more decades, but Alzheimer's disease will hopefully become a quaint basket term for a collection of disorders with different root causes that lead to memory loss. This could include one that responds particularly well to treatment with filamin A stabilizers like simufilam. Unfortunately, Cassava Sciences isn't doing anything new to target specific patients for its phase 3 study. The company intends to re-enroll volunteers who complete its ongoing phase 2 study and randomize some to receive a placebo for six months.

The current dearth of effective Alzheimer's disease treatments isn't for lack of trying. Sadly, every single candidate that has shown promise in small studies has failed in large randomized controlled trials. Expecting a company with no history of success in any field of medicine to buck the trend in the most daunting field of all seems like an awfully big risk. Holding this biotech stock has been disastrous for investors in the past. You probably shouldn't ignore the strong odds of further losses ahead.