A competitor announced it is going public, and Nikola may have to share the hydrogen fuel cell electric truck investor pool.

Over the last year, shares of Nikola (NKLA -3.11%) have been impacted by everything from a short-seller report to progress with its first manufacturing facility. Tuesday, shares dropped more than 5% before settling down 3.5% as of 1:45 p.m. EST for what looks to be another reason. 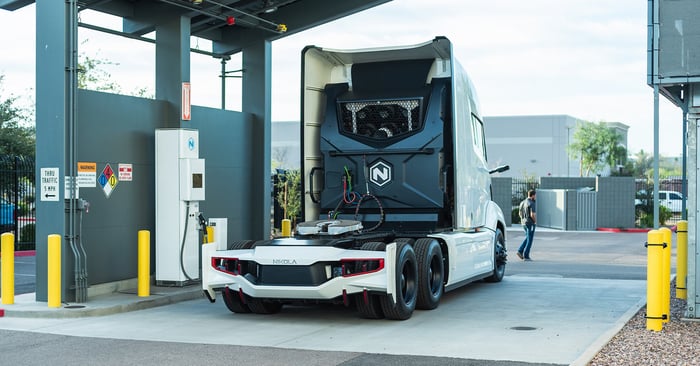 Today, Hyzon Motors announced it plans to merge with SPAC Decarbonization Plus Acquisition (DCRB), which will result in a combined company with an enterprise value of $2.1 billion. Hyzon is a manufacturer of zero-emissions hydrogen fuel cell powered vehicles, including heavy duty trucks, buses, and coaches. The company was originally part of Singapore-based Horizon Fuel Cell Technologies, which is the world's largest-volume producer of fuel cells. Hyzon launched in the U.S. in 2019 and delivered about 400 fuel cell powered commercial vehicles in 2019 alone. French energy giant Total SE is among its investors.

With Nikola trading at an enterprise value of over $8 billion, and a market capitalization of almost $9 billion, investors may soon feel that an investment in Hyzon is a better value for their money. If the technology and infrastructure pan out, it may not be an either/or decision. But for today, investors may be pulling some investable money from Nikola looking to redeploy it to a new option in the sector.