Please ensure Javascript is enabled for purposes of website accessibility
Log In Help Join The Motley Fool
Free Article Join Over 1 Million Premium Members And Get More In-Depth Stock Guidance and Research
By Evan Niu, CFA - Updated Feb 9, 2021 at 9:25AM

The connected fitness giant is conducting a convertible note offering.

Following its fiscal 2021 second quarter earnings release last week, Peloton (PTON 3.67%) is looking to raise $600 million in fresh capital through a private offering of convertible notes that will mature in 2026. Shares fell modestly on the news, likely due to the fact that institutional investors who buy convertible bonds typically simultaneously short the stock as part of a convertible arbitrage strategy.

Beyond that market dynamic, here's why investors should like the offering. 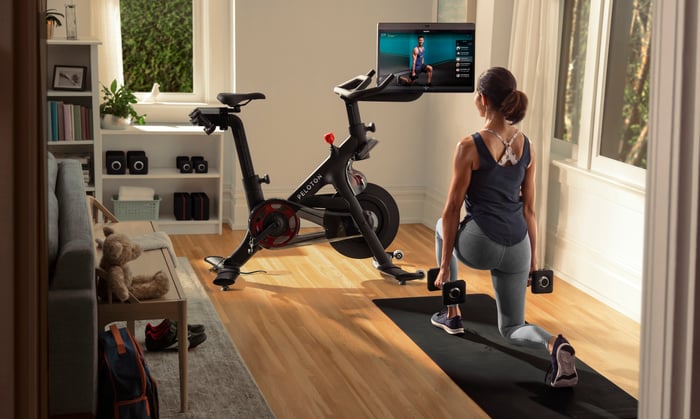 As of this writing (on Monday, Feb. 8), the deal has not yet priced, so key details such as the conversion ratio, conversion price, and interest rate have not been finalized. Peloton is also giving the investors a 13-day option to buy another $90 million of notes, so the company could end up raising as much as $690 million in gross proceeds. Some of the cash will be used to enter into capped call transactions, which are common in these types of deals and are designed to reduce potential dilution from future conversions. The rest of the money will be used for general corporate purposes, like working capital.

Peloton's cash flow is already solid, with the company generating $198 million in operating cash flow. After deducting $70 million in capital expenditures, that brings free cash flow to $128 million last quarter. The company finished the quarter with $2.1 billion in cash on the balance sheet and also has a $250 million revolver that is undrawn.

But Peloton has committed $100 million to strengthen its supply chain, with that money being allocated to air freight and expedited ocean freight. The company has been struggling to keep up with demand and has been grappling with ongoing delivery delays since its equipment is currently manufactured in Asia. Investors were rattled by the $100 million investment since it will pinch profitability for a couple of quarters, but those concerns are short-sighted.

In addition to the freight costs, remember that Peloton announced in December that it would acquire Precor for $420 million in cash. That acquisition will be a game-changer, giving the consumer discretionary company a large manufacturing footprint in the U.S. while also allowing Peloton to expand into the massive commercial market for workout equipment. The transaction is expected to close soon, and it will then take some time for Precor to ramp manufacturing of Peloton products.

In other words, the proceeds from the offering will cover both the Precor acquisition as well as the investment in expedited freight costs. The supply chain issues have been Peloton's biggest operational challenge in recent quarters, but there is now "light at the end of the tunnel," according to Peloton President William Lynch.