Please ensure Javascript is enabled for purposes of website accessibility
Log In Help Join The Motley Fool
Free Article Join Over 1 Million Premium Members And Get More In-Depth Stock Guidance and Research
By Adam Levy - Feb 10, 2021 at 9:30AM

The Uncarrier has a lot of work to do to turn Sprint's former customers into happy post-merger T-Mobile fans.

Sievert didn't break out the specific figure for T-Mobile-branded postpaid consumer phone churn, but total churn across its subscriber base (Sprint and T-Mobile) came in at 1.03%. "T-Mobile went from worst to first on churn with our winning formula," he said. "And here's the point. We know how to apply that same formula to our much higher churning Sprint-branded customers."

T-Mobile is only in the early stages of transitioning legacy Sprint customers into T-Mobile customers. There are a lot of technical hurdles to overcome, and then there are some things that it will simply take time to roll out to the 26 million wireless customers it gained via the merger. 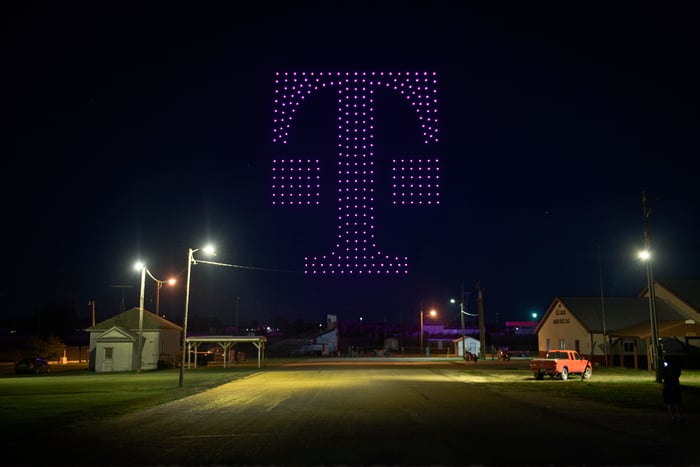 The biggest technical challenge is transitioning customers from the Sprint network to the T-Mobile network. Not only will this give them access to a better network with faster speeds and more coverage, it'll allow T-Mobile to decommission Sprint cell sites and free up that spectrum for use in its 5G network. T-Mobile gained experience doing this by decommissioning the MetroPCS network last decade.

So far, T-Mobile has only moved 4 million Sprint customers to T-Mobile's network. As T-Mobile works through the rest of them, selling new network-compatible devices to those customers, it should see continuous improvements in churn.

Lower churn among customers with new devices and on the T-Mobile network should help offset the costs of any device promotions T-Mobile runs to transition customers. More importantly, the synergies from decommissioning the legacy Sprint cell sites will more than make up for the costs of transitioning customers. That said, the biggest cost savings can't happen until customers are fully transitioned to a single network.

One reason Sievert thinks he and his team can considerably reduce churn among Sprint users is because he doesn't think AT&T and Verizon are really going after those customers. Marketing chief Matt Staneff pointed out that in 2020's fourth quarter, AT&T's and Verizon's combined net subscriber additions were about equal to what they were a year prior. AT&T added more this year with significant promotions, while Verizon added fewer, but kept its most profitable customers.

Sievert sees this as signaling an opportunity for T-Mobile, noting it was the only carrier to both boost its customer growth and its profitability. "We're about to take all their customers," he boasted. He believes T-Mobile has the resources to "offer customers the best value and the best network," and he notes that the biggest competitive edge held by both Verizon and AT&T is consumers' perceptions about their networks' superiority.

T-Mobile is well ahead of the other telecom companies on building out its 5G network. What's more, it has the spectrum licenses necessary to get even further ahead in 2021, while AT&T and Verizon will have to wait to clear the new C-Band spectrum they acquired in the recent FCC auction.

Transitioning more Sprint customers to T-Mobile's 5G network, educating them on the benefits of 5G, spreading the word about how T-Mobile's network compares to AT&T's and Verizon's, and rolling out additional T-Mobile customer initiatives to its Sprint subscribers will ensure T-Mobile keeps more of them. And that should also mean fewer net additions for Verizon and AT&T.