The company will focus on its Challenger and Global business jets.

Bombardier is streamlining its business-jet operations and intends to focus on its Challenger and Global brands, which it says are more profitable. The company is discontinuing Learjet as part of a broader campaign aimed at cutting $400 million in annual costs, including reducing its workforce by 1,600 positions, by 2023. 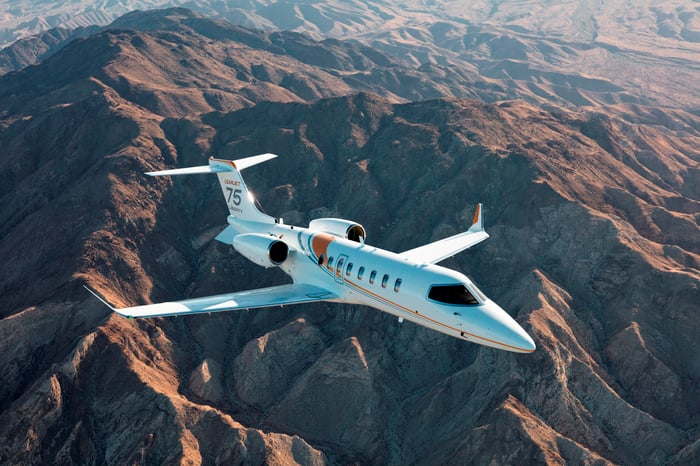 "With more than 3,000 aircraft delivered since its entry-into-service in 1963, the iconic Learjet aircraft has had a remarkable and lasting impact on business aviation," CEO Eric Martel said in a statement. "However, given the increasingly challenging market dynamics, we have made this difficult decision to end Learjet production."

Sales of business jets have never fully recovered from the 2008-2009 recession, and the global pandemic has further delayed a predicted rebound in the business. With corporate fleets aging, there should be opportunities for Bombardier, as well as rivals General Dynamics (GD -1.97%) and Textron (TXT -0.43%), to boost sales in the years to come. But given the competition in the market, all three have been doing what they can to cut costs and improve efficiencies.

The Learjet announcement came as Bombardier reported a fourth-quarter loss of $0.01 per share. For the year, Bombardier delivered 114 business jets, with 44 of those deliveries in the fourth quarter.

Bombardier has been shedding assets in recent years to try to reduce its debt and improve profitability. It sold its CSeries aircraft program to Airbus in 2018, and last year unloaded its aerostructures unit to Spirit AeroSystems and sold its rail division to Alstom.

Why Shares of Textron Are Higher Today

Here's How Bombardier Hopes to Get Back on Track

Boeing Could Win Despite Losing in Bombardier Tariff Dispute