Please ensure Javascript is enabled for purposes of website accessibility
Log In Help Join The Motley Fool
Free Article Join Over 1 Million Premium Members And Get More In-Depth Stock Guidance and Research
By Lou Whiteman - Feb 12, 2021 at 11:03AM

The Pentagon's research arm is handing out "LongShot" contracts.

The Pentagon's research arm has awarded contracts to Lockheed Martin (LMT -0.34%), Northrop Grumman (NOC -1.15%), and General Atomics to develop an air-launch, missile-packed drone. The money involved, at least for now, is small, but competitions like this one are likely to have long-term ramifications on future government development efforts.

The U.S. Defense Advanced Research Projects Agency (DARPA) handed out the contracts for Phase I design work on the "LongShot" unmanned air vehicle (UAV). The program is designed to use UAVs to deploy multiple air-to-air weapons, extending the range from which the military can use drones to attack foes and, in the process, lessening the risks for crewed fighter jets.

For all the tech at the Pentagon's disposal, it is for now still reliant on crewed aircraft to penetrate enemy defenses and deliver air-launched missiles. LongShot is part of the effort to change that, in theory allowing crewed planes to launch drones from a standoff range away from enemy threats and allow the drones to close the gap and take more effective missile shots.

The deal values are undisclosed, but DARPA had requested about $22 million for LongShot in its budget submission last year. For now the contracts are focused on design, but the agency said it intends to construct and fly full-scale air-launched demonstration systems capable of controlled flight before, during, and after a weapons launch.

If all goes to plan, DARPA believes the finished LongShot program could be of interest to both the U.S. Air Force and the Navy.

UAVs are the future

The program represents only a small part of DARPA's $3.5 billion annual budget, and is one of a growing number of drone concepts the military is considering. It's impossible to say who, if anyone, will emerge as a winner in the LongShot competition, but there are some big-picture trends defense investors should note from the process.

The military is attempting to broaden its crewless arsenal both to save U.S. serviceperson lives, and to cut costs. These programs are unlikely to replace the need for crewed fighters and bombers in the foreseeable future, but it could lower long-term demand for weapons platforms including Lockheed Martin's F-35 Joint Strike Fighter. And if nothing else, it helps to explain why the Air Force is overhauling its development and procurement operations for its eventual next fighter jet. 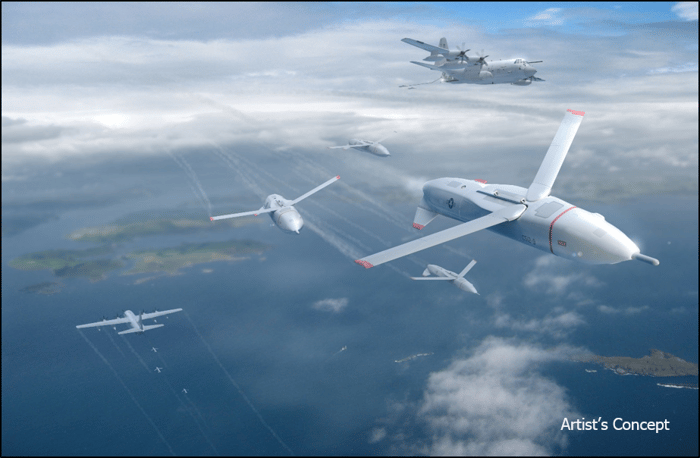 LongShot is likely to be designed in such a way that it can be deployed under the wing of a fighter or from the weapons bay of a bomber, which would extend its range well past whatever amount of fuel the drone is able to carry.

The program's success, and the lessons learned in the process, could influence design decisions on future aircraft, and as importantly even impact the mix of bombers, fighters, and other planes the Air Force needs in the decades to come.

Projects like LongShot offer not only opportunities but also risks for defense titans like Lockheed Martin and Northrop Grumman. Together with Boeing the trio soaks up much of the military aviation budget, but tech and a growing need for smaller, lighter, and crewless systems have the potential to open up competitions that were once limited to just a handful of the largest contractors.

Privately held General Atomics has long been one of the Pentagon's top vendors of drones, but as the systems become more sophisticated the lines between small-ticket UAVs and major weapons programs like fighters and bombers is blurring. Other drone makers including Kratos Defense and Security Solutions are also making progress moving up the food chain with increasingly sophisticated designs.

Companies like Lockheed Martin and Northrop need to be present in these competitions because programs like LongShot could siphon off a growing portion of future Pentagon budgets, leaving less money for big-ticket items like planes. If nothing else, the companies involved in LongShot will benefit from getting subsidized research and development that can likely be applied to a lot of different future Pentagon designs.

It's no sure thing that LongShot will turn into a big payday, but these DARPA projects are an important part of the effort by defense primes to future-proof their portfolios.