Please ensure Javascript is enabled for purposes of website accessibility
Log In Help Join The Motley Fool
Free Article Join Over 1 Million Premium Members And Get More In-Depth Stock Guidance and Research
By Lou Whiteman - Updated Jan 30, 2020 at 7:27AM

A futuristic drone program is airborne, highlighting the promise of the companies behind the effort.

Gremlins, a futuristic Pentagon program trying to develop a flying aircraft carrier able to launch and recover drones mid-flight, achieved a key development milestone earlier this month. We're a long way away from seeing the system deployed in an actual combat mission, but the successful test flight is a boost for Kratos Defense & Security Solutions (KTOS 0.36%) and, indirectly, Leidos Holdings (LDOS 1.73%).

The U.S. Defense Advanced Research Projects Agency (DARPA) announced on Jan. 23 that the Kratos-built X-61A Gremlins Air Vehicle (GAV) flew for the first time back in November. The drone launched from a C-130A transport airplane and flew for one hour and 41 minutes, completing a number of flight demonstrations.

The flight didn't go without a hitch: At the end of the mission the X-61A engine was shut down, as planned, and a parachute was deployed, but the main parachute suffered a mechanical failure and the drone crashed. But the parachute is not part of the expected final design, and both the government and Dynetics, the contractor leading the effort, were pleased with the outcome.

Want to see history in the making? We have a link for that. Check out our Gremlins X-61A maiden flight test, featuring the airborne launch and part of the free flight!https://t.co/4R5Vo5hk0n

"The vehicle performed well, giving us confidence we are on the right path and can expect success in our follow-on efforts," Scott Wierzbanowski, DARPA's Gremlins program manager said in a statement. "We got a closer look at vehicle performance for launch, rate capture, engine start, and transition to free flight. We had simulated the performance on the ground, and have now fully tested them in the air. We also demonstrated a variety of vehicle maneuvers that helped validate our aerodynamic data."

Gremlins is an experimental program aimed at deploying swarms of low-cost, reusable drones for missions including coordinated attacks or intelligence gathering and surveillance. The program is only a demonstration, with Dynetics hoping to show in the months to come that the drones can loiter for one hour over a 300 nautical mile radius and carry more than 50 pounds in their nose cones, and eventually that the carrier ship can launch and recover four drones in less than 30 minutes.

Dynetics has five X-61A drones for the tests, so the crash does not impact its timetable. But it also gives the company little room for error as it continues to explore what its test aircraft are capable of.

Privately held Dynetics has long flown under the radar in the defense sector, but that changed in December when government IT giant Leidos announced plans to buy the company for $1.65 billion in cash. Dynetics has a reputation as a top-notch research shop with exposure to intelligence, missiles, aviation, cyber, and space, but critics have concerns that it can be difficult to turn bleeding-edge research into actual procurement dollars. Success bringing Gremlins to market would help alleviate any concerns.

Dynetics has positions in key futuristic Pentagon programs, including a Lockheed Martin-led effort to design a U.S. Army laser weapon and a subcontractor role on Boeing's Space Launch System. It's worth noting that even though the successful Gremlins flight was only announced in January it was completed in November, so Leidos knew about the results when it agreed to pay a rich 15 times EBITDA and 1.5 times sales for Dynetics.

Kratos is only a subcontractor on the Gremlin effort, but as the manufacturer of the drone it is a very important subcontractor that can expect to soak up a good portion of the revenue from any eventual Air Force order. Kratos is perhaps best known for another drone, its XQ-58A Valkyrie loyal wingman drone, which is currently on trial with the Air Force. The Valkyrie is a larger, more complex system than the Gremlin, designed to accompany piloted fighters into combat to add firepower and overwhelm enemy defenses. 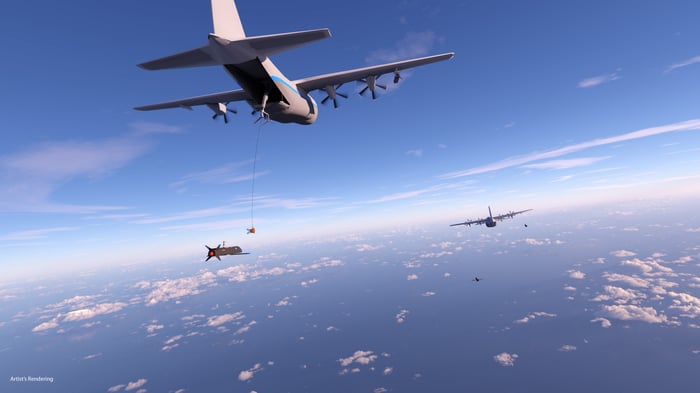 Illustration of the Gremlins drones in action. Image source: Dynetics.

The Valkyrie, despite some setbacks, has largely performed well in trials, and has helped Kratos shares more than double over the past three years. But shares have been largely flat over the last six months, as the reality of the slow, tedious process of winning a major defense contract hits home with investors.

The Valkyrie completed its fourth successful test flight last week, and remains the odds-on favorite to eventually win a major Air Force order. But Boeing is lurking in the shadows with its own wingman concept.

Kratos management has spent the last year trying to remind investors that the Valkyrie is just the first of a number of high-performance drones in development, with some programs top secret due to their sensitive nature. Progress in the Gremlins project helps validate Kratos' argument that it isn't at risk of becoming a one-trick pony.

Gremlins is still in its development stages, and it is impossible to say how soon, or how much, the program could ultimately be worth to the companies involved. What is clear is that the Pentagon is increasingly looking to autonomous drones, ships, and land vehicles in an effort to add firepower without the added cost of more power, and without putting soldiers at risk.

So even if we can't say this test means that Gremlins will be a blockbuster success for Kratos and Leidos' Dynetics, we can say with some certainty that every successful demonstration is a feather in the cap for these second-tier defense contractors. And it should open new doors, and provide more opportunities, for companies like Kratos and Leidos to compete with titans like Lockheed Martin.

Last summer I listed both Kratos and Leidos as among the best defense stocks to buy based on the potential of their futuristic technologies. We're still in the early days for both companies, but the successful test is an indication the Gremlins tech is well on its way to fulfilling its potential.