Please ensure Javascript is enabled for purposes of website accessibility
Log In Help Join The Motley Fool
Free Article Join Over 1 Million Premium Members And Get More In-Depth Stock Guidance and Research
By Rich Smith - Jan 1, 2018 at 6:03AM

The movies were right: Gremlins are real.

Or at least they will be if DARPA -- the U.S. Defense Advanced Research Projects Agency -- has anything to say about it. As we learned this week from our friends at the Navy Times, DARPA is moving ahead on its effort to create a fleet of flying aircraft carriers, which it calls the "Gremlins" program, with demonstration flights scheduled to begin sometime next year. 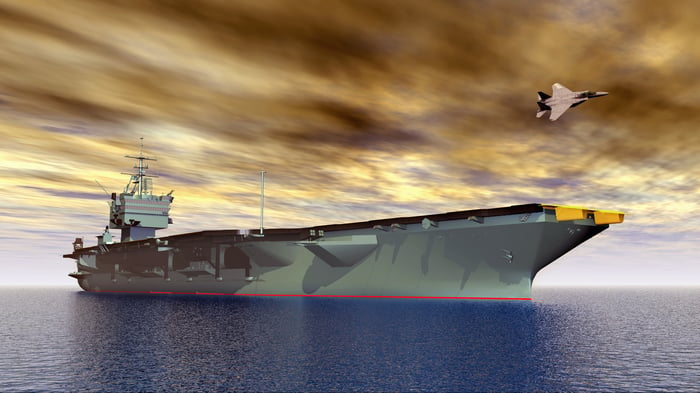 That's a nice looking aircraft carrier you've got there -- but can it fly? DARPA's can. Image source: Getty Images.

We've been watching this particular hush-hush DARPA project for more than two years now. In a nutshell, it calls for the creation of a new class of small, reusable drones that can be launched midair from a C-130 air transport, disperse to surveil (or, depending on the payload, attack) targets as much as 300 miles away, then return to their flying airbase to dock for refueling and rearming.

Basically, Gremlins will be flying, warlike Roombas, but supersized -- big enough to carry 60 pounds of payload each.

What are Gremlins for?

According to our friends at Scout Warrior, who've also been following this project closely, one key objective of the Gremlins is to extend the range at which U.S. air forces can operate in a contested environment characterized by an adversary employing A2/AD (anti-access/aerial-denial) tactics. These include the use of cruise missiles to keep aircraft carriers at bay, forcing airplanes to fly long distances to reach their targets, and surface-to-air missiles, which make it hazardous for nonstealthy aircraft to get too close to hostile territory by air.

Obviously, nonstealthy C-130 air transports aren't the best way to penetrate such defenses. After Phase 3 of the Gremlins project is complete, the Air Force will probably want to order up a stealthy "mothership" to take over the role of "flying aircraft carrier." Such a mothership -- perhaps a modified version of Northrop Grumman's (NOC 1.64%) new B-21 bomber, or the yet-to-be revealed carrier-launched MQ-25 Stingray, could fulfill this role.

Launched from an aircraft carrier, a more advanced mothership would fly stealthily into hostile airspace, undetected by radar. Suddenly, enemy radar screens would light up as dozens of unstealthy Gremlin drones appear seemingly from out of nowhere to conduct strikes, then return to their mothership and simply vanish into radar-invisibility once again.

At which point the mothership would return to base, never having been detected.

Sounds cool. But what does it mean to investors?

At one point, there was a chance that the defense giant Lockheed Martin (LMT 2.05%), which makes the C-130, would also be chosen to build Gremlin drones to fly from the C-130 in Phase 3. This hope was dashed in March, however, when DARPA tapped two other large, privately owned defense contractors to lead the Gremlins effort.

Dynetics and General Atomics (maker of the Predator drone) are currently building competing Gremlins prototypes for DARPA to review in "Phase 2" of the Gremlins project. Phase 3, which has not yet begun, will see DARPA choose one of the two prototypes to develop into a "full-scale technology demonstration system," the one that will be test-flown in 2019. At an estimated unit cost of "under $500,000," the ultimate value of the Gremlins program to investors will depend largely on how many Gremlins can fit aboard a mothership -- and how many stealthy motherships the U.S. Air Force decides it wants to buy.

As for who will get this loot, although both Dynetics and General Atomics are privately owned, and therefore unavailable to individual investors to buy into, there may still be ways for investors to profit from a potential Gremlins award. This is because Dynetics, at least, is known to have enlisted the publicly traded defense firms TransDigm, Moog, and Kratos Defense & Security on its team as subcontractors to help with its effort. Whether this is the team that will win the Gremlins contract or whether all the money will go to privately owned General Atomics could be revealed later this year, assuming the Phase 3 award is announced ahead of its capstone event: the flight demonstration.

Further down the road, though, as the need for a stealthy mothership becomes more urgent, I'd expect further development money to be awarded -- probably going to a company with proven abilities in building stealthy aircraft. Northrop (maker of the B-2 and B-21) and Lockheed (which builds the F-35 and F-22) appear to be the most likely prospects in this regard.