Please ensure Javascript is enabled for purposes of website accessibility
Log In Help Join The Motley Fool
Free Article Join Over 1 Million Premium Members And Get More In-Depth Stock Guidance and Research
By Lou Whiteman - Oct 19, 2019 at 8:38AM

The company's most promising aircraft suffers a rough landing, but it doesn't crash the bull case for Kratos.

The issue shouldn't be enough to derail Kratos' most promising program, and the one driving much of the company's impressive stock run-up in recent years. But it is a reminder to investors that winning government contracts tends to be a long and winding process, and it is important not to let the excitement get ahead of results.

The Air Force in a statement said the Kratos XQ-58A Valkyrie drone currently on trial in Arizona was damaged due to "high surface winds and a malfunction of the vehicle's provisional flight test recovery system." The drone to date has returned to earth at the conclusion of a test flight by shutting down its engines and deploying a parachute. The Valkyrie also has several airbags designed to cushion the landing. It appears some part of that process went wrong.

Kratos in its own statement added a few more details. "In final descent," the company said, "the prototype cushion system, which was employed for the initial test series but is not intended for ultimate operational use, suffered an anomaly resulting in the aircraft sustaining damage upon touchdown."

"Pleased with the progress"

Kratos, a maker of microwave electronics, turbine components, and several drones used for target practice, saw its shares climb 300% during a three-year period ending this summer due to excitement about the potential for the Valkyrie. The Pentagon is evaluating the drone as part of its "loyal wingman" concept that would fly alongside crewed fighters and provide additional firepower or overwhelm anti-aircraft defenses.

Other contractors are also pursuing the wingman concept, but Kratos and the Valkyrie are the first to have a product at the Air Force for testing. That's led to optimism that the Pentagon could soon make a larger order for the drones, which Kratos hopes to eventually price at around $2 million apiece when manufacturing at scale. A commitment by the Air Force to deploy the drone could significantly move the needle for Kratos, a company that generated sales of $672 million over the past 12 months.

The crash will delay the scheduled fourth test flight and could push back a Pentagon decision on whether to move forward with the Valkyrie. But it shouldn't be a fatal blow. Steve Fendley, head of Kratos' unmanned systems division, in the statement said the cushion system "is an area we must improve" but noted that finding issues like the one that grounded the Valkyrie is "specifically why flight test series are performed."

Until the landing, the Valkyrie demonstration had been going extremely well. The Air Force said that the Valkyrie completed all test objectives during the 90-minute flight, its third of five planned test flights, and the commentary from military leaders has been positive.

"We continue to learn about this aircraft and the potential the technology can offer to the warfighter," Maj. Gen. William Cooley, commander of the Air Force Research Laboratory, said in a statement. "We have gathered a great deal of valuable data from the flight and will even learn from this mishap. Ultimately, that is the objective of any experiment and we're pleased with the progress of the Low Cost Attritable Strike Demonstration program."

Kratos shares have stalled in recent months as investors have been forced to readjust expectations as the hope for a quick Valkyrie order has been squelched by the realities of methodical Pentagon procurement policies. The hard landing isn't likely to sit well with investors, but the overall trajectory for the Valkyrie, and Kratos, is still upward. 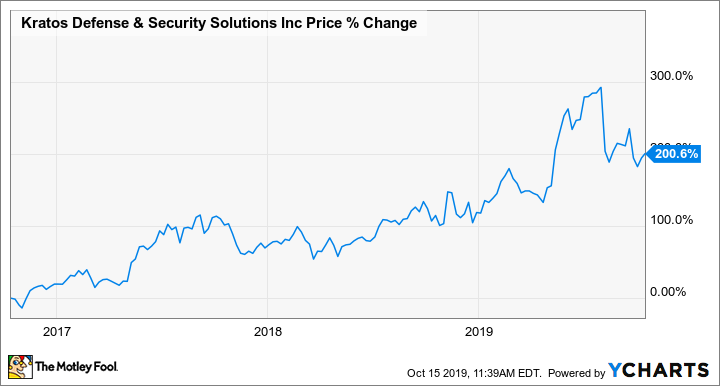 As issues go, the landing system should be relatively simple to fix, and Kratos bulls should be encouraged that the Air Force seems to like what it's seeing so far in the airborne trials. The company already has congressional support for the program, with lawmakers authorizing up to $200 million for the wingman drone project in the fiscal 2020 budget, and even after the crash the demonstration so far has done nothing to slow the momentum.

It's also worth noting that Kratos is bigger than just the Valkyrie. The company has several other advanced drone programs in development, and it's space unit could be among the winners from the government's Space Force push as well as from efforts by commercial operators to provide internet connectivity from above.

Kratos shares have consistently been more volatile than most defense stocks, and still offers higher potential reward, and more risk, than most of the sector. The mishap is certainly a setback, but for those who can stomach the turbulence that often comes with developmental-stage programs, Kratos still looks like a long-term winner.