Please ensure Javascript is enabled for purposes of website accessibility
Log In Help Join The Motley Fool
Free Article Join Over 1 Million Premium Members And Get More In-Depth Stock Guidance and Research
By Lou Whiteman - Updated Sep 28, 2018 at 11:27AM

No matter who wins the turf war, space spending is set to rocket higher.

A battle is brewing in Washington, D.C., over White House plans to add a Space Force as the sixth branch of the armed forces. There's sure to be opportunities that arise out of the proposal, but investors need to be careful not to get too caught up in excitement over eye-popping spending plans for the new service.

The Pentagon by some estimates will have to spend upward of $13 billion just to get Space Force up and running. The math behind that amount is debatable, as is what will become of the White House proposal. The underlying trends driving the idea of Space Force, however, should withstand the debate. 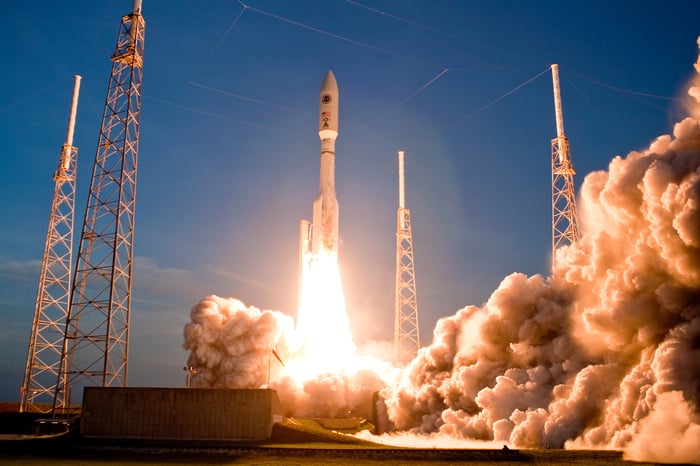 Here's a look at where Space Force stands, and what the proposal tells us about the Pentagon's spending priorities.

The Air Force, in a Sept. 14 Air Force memo obtained by Defense One, said the stand up costs of a new Space Force branch would be $12.9 billion over five years. Air Force Secretary Heather Wilson, writing to Deputy Defense Secretary Patrick Shanahan, said the cost projection is based on a force of about 13,000, including 2,400 at a newly constructed headquarters.

Wilson and the Air Force are on the defensive, as the Air Force is where much of the Pentagon's space activities currently reside. Today the Air Force Space and Missile Systems Center in southern California oversees about 85% of Department of Defense space procurement, overseeing satellite acquisition and launches.

In an interview with CNBC Wilson said the Air Force is committed to supporting the White House's goal of establishing a separate branch, but did note that considerable work is already being done without the cost of a new agency. The Air Force "has a lot of authorities now" to invest in space," she said, adding "we don't have to wait" for Space Force to be established.

Skeptics outside of the Pentagon have questioned the Air Force's projections, which could be viewed as an attempt to derail the White House Space Force plan. Todd Harrison, director of budget analysis at the Center for Strategic and International Studies in Washington, D.C., during a Sept. 20 news conference called the $13 billion figure "the highest estimate I think you could possibly come up with," noting it assumes building all new infrastructure and hiring a massive support staff on day one.

The industry wins either way

The Space Force debate is largely a political one, and it's impossible to say with any certainty what an eventual Space Force would look like. Fortunately for investors, the only real certainty in this debate is that the Pentagon, via some agency or branch, is going to be investing heavily in space. As Wilson said, the Air Force today has the authority, and the willingness, to spend.

The fiscal 2019 Pentagon budget includes $9.3 billion for space programs, a jump from $7.8 billion in 2018. Throw in what is very likely a substantial sum of space-related business contained within the classified budget, and space is clearly a growth area.

The companies best in position to take advantage of this trend are Boeing (BA -5.07%), Lockheed Martin (LMT -0.34%), Northrop Grumman (NOC -1.15%), Harris (LHX -1.44%), and Raytheon (RTN). Boeing and Lockheed work together as the United Launch Alliance, competing against Elon Musk's SpaceX and Northrop to launch new gear into orbit, and also make a range of satellites and high-tech aircraft that travel into the upper levels of the atmosphere and beyond. Northrop recently bet big on space via its $9.2 billion deal for Orbital ATK, while Harris and Raytheon make a lot of the sensors and electronics that go into highly classified satellites.

Part of the Pentagon's goal in establishing a separate Space Force is to speed the development, acquisition, and launch of military hardware. That push is likely to survive whatever becomes of the Space Force debate to the benefit of contractors.

Space is a differentiator

After a few years of steady growth, the Pentagon budget is expected to be flat in 2020. Government officials hope to cut costs to keep procurement levels rising, but chances are there are going to be winners and losers among big-ticket programs.

Space-related programs are likely to survive budget battles, and investors should expect contractors with significant exposure to space to hold up better in a more difficult budgeting climate. Space exposure alone isn't a reason to buy into any stock, but it is a reason to have confidence that investments in companies that are already going strong -- a list that includes Lockheed Martin, Raytheon, and Harris -- will hold up even if Pentagon spending ebbs.

Space is essential to national security, but also very expensive and complicated to master. Investors can ignore the turf battle and headline cost figures and come out on top no matter whether Wilson or the White House sees their vision become reality.