Please ensure Javascript is enabled for purposes of website accessibility
Log In Help Join The Motley Fool
Free Article Join Over 1 Million Premium Members And Get More In-Depth Stock Guidance and Research
By Rich Smith - Jun 24, 2018 at 8:13AM

But is its stock a bona fide buy?

Earlier this month, Northrop confirmed that having just received antimonopoly clearance from the Federal Trade Commission, it had immediately proceeded to close its purchase of smaller aerospace company Orbital ATK. Northrop wasted no time in stamping its mark on its new prize, renaming it Northrop Grumman Innovation Systems (NGIS) and designating it Northrop's "new, fourth business sector." 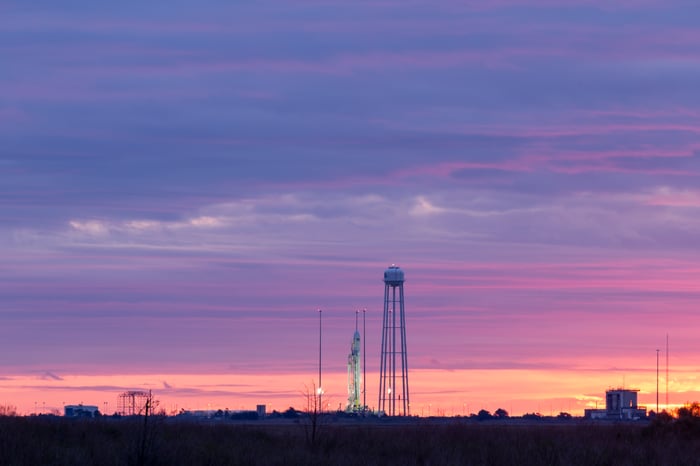 Why did Northrop buy Orbital?

And yet, a lot of the growth in space lately has come not in the "really big things" -- such as large satellites and the larger rockets that put them into orbit -- but in small satellites, small rockets, and the industry that's rapidly becoming known as "new space." Over the next five years, space industry researcher StratSpace Intelligence predicts, more spacecraft will be launched into orbit than were launched in the last 50 years combined. StratSpace says about 3,500 space missions are currently planned through 2022, with the majority of these being "small missions and spacecraft."

Northrop Grumman's acquisition of Orbital ATK can be viewed in part as an effort to capture a piece of this growth market. "If you look at the portfolio at Orbital ATK, it's more the smaller, in many case, more-agile response capabilities that are going to be core to this future," Bush said.

Orbital ATK's fleet of Antares, Minotaur, and Pegasus launchers are smaller in capacity, and cheaper to purchase, than the large Delta IV and Atlas V rockets operated by its rival United Launch Alliance. Orbital is also engaged in cutting-edge projects like the development of a space "tow truck" service to repair orbiting spacecraft for its commercial satellite customers.

At the same time, though, acquiring Orbital ATK -- which is currently developing a heavy-lift rocket for the U.S. Air Force -- helps to lift Northrop into the realm of giant space stocks like Boeing and Lockheed Martin (the co-owners of United Launch Alliance), whose Delta IV (Boeing) and Atlas V (Lockheed) rockets have dominated the government space-launch business for years. Assuming Northrop brings Orbital's OmegA heavy-lift rocket to completion, it will itself become a contender in large space launches.

What does this deal mean in dollars and cents?

So Northrop Grumman is now a major player in both "big space" and "new space" with this acquisition. But is it a good investment? That's actually harder to answer than it seems.

Look up Northrop Grumman stock on Yahoo! Finance, for example, and you'll see little evidence that the Orbital deal has already closed. Northrop is still listed as having a $54.9 billion market capitalization, pulling down $26.1 billion in trailing 12 month sales, earning a 13.1% operating profit margin on those sales, and dropping nearly $12 per share to the bottom line.

But those numbers no longer reflect the real Northrop.

As detailed in its SEC filing made to confirm the merger's closing, Northrop now expects to end this year with sales of $30 billion -- 15% higher than its trailing sales figure and $3 billion above previous guidance, before Orbital. On the other hand, the company's operating profit margin, already retreating from record highs last year, is expected to erode further with the absorption of lower-earning Orbital -- falling into the upper 11% range. Still, adding Orbital's profits to its own, Northrop expects to end this year with per-share profits of between $16.20 and $16.45.

So is $54.9 billion a fair price for the new Northrop? Valued on this year's expected earnings, Northrop is selling for a P/E of 19.2. That doesn't sound too bad, given that the average P/E on the S&P 500 today is 25.1. Problem is, analysts are only projecting about 10% annualized long-term earnings growth for Northrop, according to data from S&P Global Market Intelligence -- and 19x earnings seems a bit much to pay for just 10% growth. On top of that, the stock's 1.8 price-to-sales ratio is about 80% above what aerospace companies have been averaging for most of this decade.

Long story short, even as Northrop's latest acquisition suggests it's setting its sights higher -- all the way to space -- the stock's valuation tells me there's more downside than up for Northrop Grumman stock.