Defense contractor Northrop Grumman (NOC -0.87%) reported fourth-quarter and full-year earnings on Jan. 25. How did it do? That kind of depends on how you look at the numbers.

On one hand, Northrop reported only modest sales growth for Q4 -- just 4% -- and a huge decline in per-share earnings, which at just $1.01 per diluted share plunged 66% in comparison to last year's Q4. And yet, responding to that big drop in earnings, investors bid up Northrop Grumman stock, which closed last week 5.5% higher.

Why such a positive reaction to such negative news? 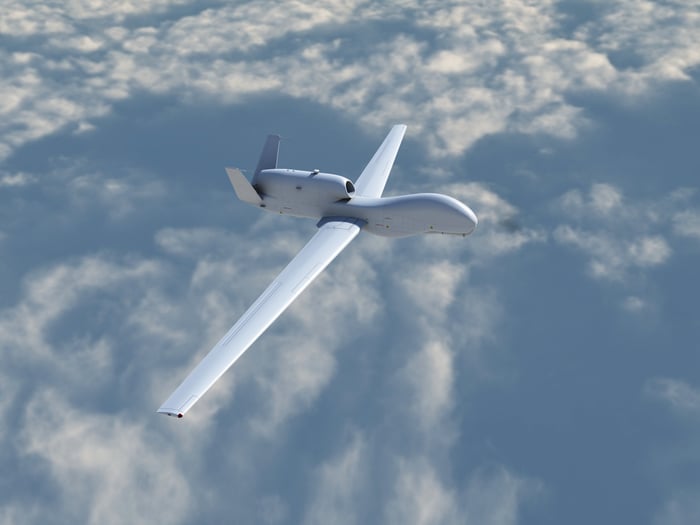 Northrop Grumman stock soared as high as its Global Hawk drone after earnings -- but does turbulence lie ahead? Image source: Getty Images.

As it turns out, Northrop's news wasn't quite as bad as met the eye. Most of the company's decline in profits was attributable to the one-time shock of incorporating changes to U.S. tax law into the results for Q4 (specifically, a "writedown of deferred tax assets").

For the year as a whole, though, Northrop did quite well. Sales grew faster than we saw in Q4 alone -- up 5% to $22.8 billion. Profits declined, but only 6% to $11.47 per diluted share. Free cash flow flatlined at $1.7 billion, and lagged reported income yet again -- but at least did not decline.

Uncle Sam giveth, and Uncle Sam taketh away (or was that vice versa?)

Helping the company to earn all this profit, and generate all this cash, will be a new and improved effective income tax rate of just 19.5%.

What's the new normal for Northrop?

Assuming this is the new normal for Northrop, how should investors be thinking about Northrop Grumman stock going forward? Well, assume the 33% jump in profits in 2018 is a one-time event caused by the big year-over-year decline in the tax bite. Assuming that Northrop can hold its new tax rate more or less steady at 19.5%, and continue to grow revenue at the 5% pace we saw in 2017 (and that management is projecting for 2018), what kind of income growth rate can we expect?

Well, 5% or so at a minimum -- but also maybe at a maximum. After all, profit margins are unlikely to expand much. Northrop Grumman's profit margins hit an historic high of 13.4% early in 2017, and have already begun receding. (As I predicted they would.) Management's new guidance calls for pre-tax margins to contract to about 12% in 2018 -- down from 12.8% last year and 13% the year before.

Weakening profit margins will be a drag on Northrop's profits growth going forward, and could cause profits to grow more slowly than revenue, or even decline. Meanwhile, even assuming Northrop hits the top of its guidance range in 2018, Northrop Grumman stock now costs nearly 22 times these expected earnings.

Call me a skeptic, but I think 22 times earnings is simply too much to pay for a company likely to grow earnings at only single-digit percentages over the next few years. I would not be a buyer of Northrop Grumman stock at these prices.