Please ensure Javascript is enabled for purposes of website accessibility
Log In Help Join The Motley Fool
Free Article Join Over 1 Million Premium Members And Get More In-Depth Stock Guidance and Research
By Trevor Jennewine - Feb 13, 2021 at 7:45AM

This iconic tech company still has a big market opportunity.

Two years after becoming the first publicly traded $1 trillion company, Apple (AAPL 2.45%) became the world's first $2 trillion company in August 2020. Such expansive growth in recent years makes it pretty clear that the company has done extremely well and that Apple shareholders have done quite well right along with it.

Apple has established itself as one of the world's premier brands, and the company has become synonymous with sleek, trendy tech. As a result, Apple's iconic products -- from iPhones and iPads to MacBooks and AirPods -- have mass appeal on a global scale. And that makes it harder for lesser-known companies to compete with this tech titan. 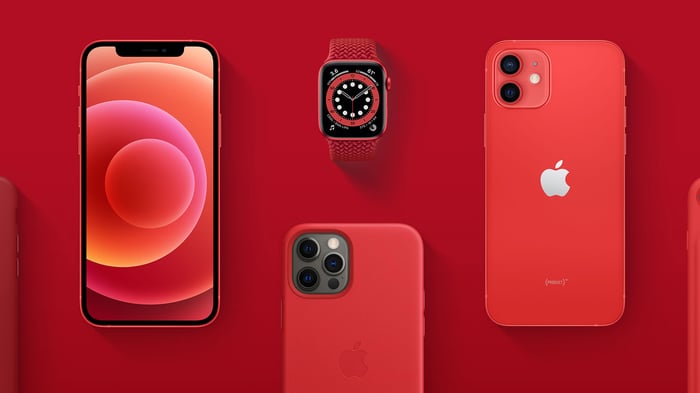 To put Apple's scale in perspective, the company had 1.65 billion devices in use around the globe as of December 2020. Moreover, the iPhone is the most popular smartphone in North America, and the iPad is the market-leading tablet worldwide. While this makes it harder to generate future growth in those markets, Apple's massive user base is still a valuable asset, and it could be the key that unlocks future opportunities.

In late 2018, Apple shifted its growth strategy to focus on services. At the time that included the App Store, Apple Pay, advertising and cloud services, and certain subscription services like Apple Music. But in the last two years, Apple has released several new products that have dramatically expanded its services ecosystem.

Last year, Apple's services revenue was $53.8 billion, accounting for about 20% of total sales. But the company's recent innovation spree is a good sign, and Apple's expanding portfolio of services could be a major growth driver in the future. Moreover, Apple's gross margin on services was 66% in 2020, more than double its product gross margin. In other words, as services account for a bigger portion of total sales, Apple should become increasingly profitable.

Weak iPhone sales in 2019 and pandemic-related headwinds in 2020 caused Apple's sales growth to slow. However, in the first quarter of fiscal 2021 (reported late last month), Apple's growth reaccelerated substantially, driven by a wave of new products.

Investors should be heartened to see Apple's year-over-year sales growth top 20%, and even more excited to see the broad-based strength across all segments. Apple's products are still in high demand, and that's a good sign for the company's future. If Apple can continue to grow its global share of devices, the company's services business should continue to gain traction quickly. 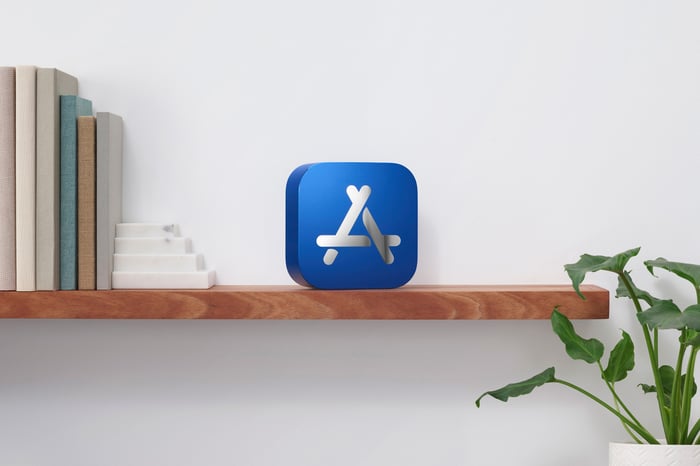 Apple is already an enormous global enterprise, and in order to have a substantial impact on its growth trajectory, Apple's services business will have to be correspondingly huge. That may be a difficult task to accomplish, especially since Apple will have to contend with several strong competitors.

For instance, Android-powered smartphones have a much larger global market share than Apple's iPhone, giving Alphabet's Google Play Store a serious advantage over Apple's App Store. Additionally, Apple TV+ may have a hard time gaining traction in the increasingly competitive streaming market, especially given the level of success that Netflix and Disney have already achieved there.

Investors should also note that, since 2014, Apple has been working on a self-driving electric car as part of Project Titan. Recently, rumors of the company's pending partnership on an Apple-branded car with Hyundai failed to amount to anything, but hours after that announcement, Nissan signaled interest in working with the tech company. While details are still vague, investors should pay attention to the situation.

Apple got where it is today through incredible innovation. From the first iPod to the latest iPhone, the company has successfully captivated consumers for years. And I would never bet against Apple's ability to conjure a new market opportunity into existence (i.e. an Apple car). Moreover, the company has strong leadership in CEO Tim Cook, incredibly deep pockets, and one of the most valuable brand names in the world. From that perspective, Apple still looks like a solid long-term investment.