Please ensure Javascript is enabled for purposes of website accessibility
Log In Help Join The Motley Fool
Free Article Join Over 1 Million Premium Members And Get More In-Depth Stock Guidance and Research
By Harsh Chauhan - Feb 13, 2021 at 9:30AM

Apple (AAPL 3.40%) supplier Cirrus Logic (CRUS 2.00%) started 2021 with a solid tailwind at its back thanks to the sales success of the iPhone 12, so it wasn't surprising that the audio specialist reported impressive growth in the third quarter of fiscal 2021, which ended on Dec. 26, 2020.

The chipmaker reported nearly $486 million in revenue during the quarter, a jump of almost 30% from the prior-year period. Q3 earnings jumped from $1.13 per share a year ago to $1.91 per share. Analysts expected Cirrus to earn $1.86 per share on revenue of $460.9 million, but it blew past those expectations as hot demand for Apple's iPhone 12 contributed to the company's performance.

With that news, investors now have a terrific opportunity to load up on shares of Cirrus Logic, which still has a relatively attractive valuation and plenty of potential for more upside.

Cirrus Logic's reliance on Apple is a good thing

Cirrus Logic is one of the best ways to play the success of the iPhone 12, as it gets 87% of its revenue by supplying chips to Apple. A teardown of the iPhone 12 and the iPhone 12 Pro by iFixit revealed the presence of four audio chips from Cirrus, which makes it easier to understand why the company's revenue exceeded the higher end of its guidance range last quarter.

Reports suggest that Apple is working to increase iPhone production substantially in a bid to meet strong end-market demand. As a result, the company's total iPhone shipments this year are expected to hit 250 million units, according to Daniel Ives of Wedbush Securities. That would translate into a year-over-year jump of more than 21%, as Apple is estimated to have shipped 206.1 million iPhones last year, according to IDC.

What's more, the iPhone maker could dominate the 5G smartphone space in 2021. So Cirrus' massive reliance on Apple is likely to remain a tailwind for the chipmaker, and its guidance indicates the same.

Cirrus expects $300 million in revenue at the midpoint of its guidance range this quarter, which would translate into a year-over-year increase of 8%. While that may seem modest at first, investors should remember that Cirrus has a history of lowballing its guidance. The company could continue exceeding expectations in the future, as the fortunes of its largest customer are looking up.

However, Cirrus Logic has additional catalysts apart from Apple that could help it switch into a higher gear.

Cirrus Logic is working to land more customers beyond Apple. The chipmaker provided some insights on its latest shareholder letter about the progress it is making on that front:

During the quarter, design activity for audio components shipping in flagship and mid-tier Android smartphones accelerated and we anticipate new devices utilizing our products to be introduced in the first half of the calendar year.

Cirrus added that its engagements with Android OEMs (original equipment manufacturers) and a strong pipeline of design wins should help it increase business from Android smartphone makers in the coming year. Additionally, the company is looking to expand its offerings beyond audio chips into other applications such as camera controllers, haptic drivers, and sensing solutions, among others.

As such, Cirrus looks well-placed to accelerate its growth in the coming quarters -- and now would be a good time to go long given the recent pullback in the price. 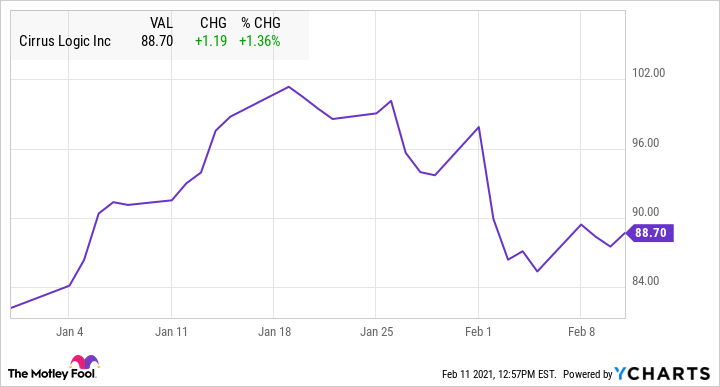 Thanks to Cirrus' recent dip, the stock now trades at 25 times trailing earnings. This is lower than the stock's average trailing price-to-earnings (P/E) ratio of 31.7 in 2020. The forward earnings multiple of 17 points toward a stronger bottom line, which is not surprising as analysts expect steady growth in the company's earnings over the next couple of fiscal years. 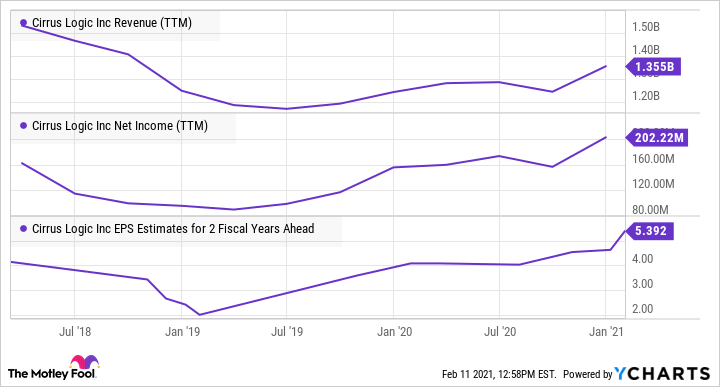 The important thing to note here is that Cirrus' revenue and earnings have started moving north of late after a period of flat performance, a trend that's expected to continue. All of this makes Cirrus Logic stock an ideal bet for investors looking to buy a growth stock at a reasonable valuation.