Please ensure Javascript is enabled for purposes of website accessibility
Log In Help Join The Motley Fool
Free Article Join Over 1 Million Premium Members And Get More In-Depth Stock Guidance and Research
By Harsh Chauhan - Feb 8, 2021 at 9:25AM

The iPhone maker looks set to stay on top after quickly climbing the 5G smartphone charts with the iPhone 12.

The success of the iPhone 12 isn't surprising. Apple's attractive pricing gave its huge installed user base a solid reason to upgrade. More importantly, the company can sustain its terrific iPhone growth momentum, and it looks set to dominate the fast-growing 5G smartphone market. 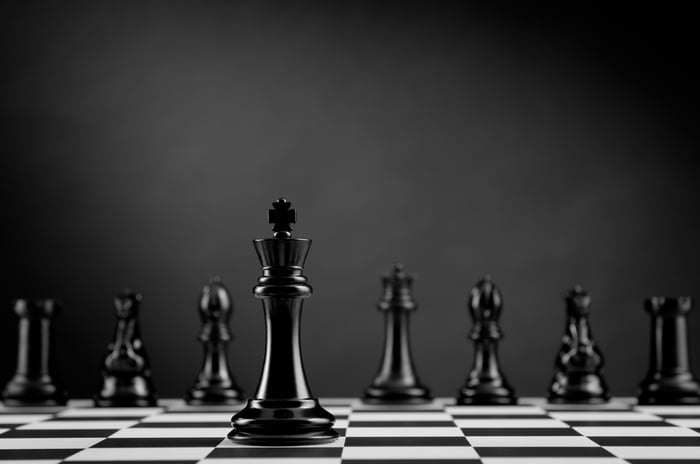 The iPhone 12 has been making waves in the 5G market

IDC estimates that Apple shipped 90.1 million iPhones globally in the fourth quarter last year, up 22.2% from the prior-year period. This helped Apple corner 23.4% of the global smartphone space during the quarter, up from the 19.9% of the market it held in the year-ago period.

Second-placed Samsung's shipments grew at a much slower pace of 6.2% over the prior-year period. The South Korean giant finished the quarter with shipments of 73.9 million units, and its market share expanded just 30 basis points year over year to 19.1%.

Counterpoint Research estimates that 5G devices accounted for 34% of global smartphone shipments of 396 million units in the fourth quarter of 2020. That was a huge improvement over 5G smartphone shipments of just 24.1 million units in the first quarter of 2020, when Samsung dominated the market with just over a third of the space under its control.

So Apple pulled ahead of its biggest rival in a quarter in which sales of 5G smartphones took off. What's more, don't be surprised to see the iPhone maker widen the gap in 2021.

Why Apple's 5G domination is set to continue

Two specific factors are helping Apple corner a nice chunk of the 5G smartphone market. First, the company got the pricing of its new devices right, with the entry-level iPhone 12 mini model starting at $699. The standard iPhone 12 starts at $799, followed by the iPhone 12 Pro at $999 and the Pro Max at $1,099.

Second, Apple has a huge installed base of iPhone users waiting to upgrade to a 5G device. Daniel Ives of Wedbush Securities estimates that a third of Apple's 1 billion-strong iPhone installed base is in an upgrade window, and this could push iPhone shipments to 250 million units in 2021. This would be a nice jump over the 206 million iPhones that Apple reportedly shipped in 2020, according to IDC's estimates.

Third-party research predicts that Apple could command 35% of the 5G smartphone market in 2021 thanks to these advantages. That would be a big deal, because 5G smartphone sales are expected to take off big time this year, with Strategy Analytics forecasting 150% growth from 2020's shipments of 250 million units.

Samsung, on the other hand, is expected to struggle in 2021 despite the 5G surge. The company is expected to ship only 26 million units of its Galaxy S21 devices this year, indicating that Apple could remain the top dog in the 5G smartphone space.

In all, the iPhone maker can sustain the terrific growth it delivered last quarter by beating its closest rival and capturing a bigger share of a burgeoning 5G smartphone market, making Apple a top 5G stock that investors should consider having in their portfolios.