Please ensure Javascript is enabled for purposes of website accessibility
Log In Help Join The Motley Fool
Free Article Join Over 1 Million Premium Members And Get More In-Depth Stock Guidance and Research
By Bradley Freeman - Feb 16, 2021 at 11:26AM

Why this e-commerce company has an easier path to success.

In the last 12 months, Jumia Technologies AG (JMIA 1.72%) -- a Germany-based e-commerce company that mainly operates in several African countries -- has seen its enterprise value (EV) spike 2,450% over the past year to roughly $5.4 billion. Social distancing orders placed added value and pressure on e-commerce infrastructure, and the sector as a whole benefited -- some (like Jumia) more than others.

While an expected global e-commerce annual growth rate of 14.7% through 2027 will surely help all of the participants continue to increase their EVs, Jumia is not the best way to invest in this growth. Ozon Holdings (OZON -8.15%) -- a Russian e-commerce giant -- is making a case for why your money would be better placed with it. Let's explore two reasons why that is. 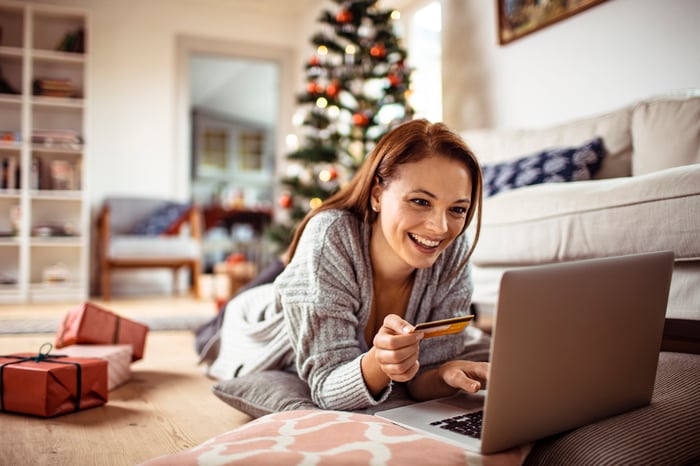 Over the first nine months of 2020 (with a boost from shopping pattern changes brought on by the COVID-19 pandemic), Ozon saw its gross merchandise value (GMV) rise 142% year over year, and it boasted 70% sales growth to reach 66.6 billion rubles (roughly $900 million). In contrast, Jumia's GMV declined 18% over the same timeframe, with revenue falling 11.9% to 97.9 million euros (roughly $118.6 million). Ozon is enjoying faster growth on a larger existing revenue base.

To be fair to Jumia, management had warned investors it was planning to temporarily pull back its pursuit of revenue growth in favor of seeking profitability. Considering this, it's encouraging that Jumia's operating margin improved from negative 150.1% to negative 111.6% over the first nine months of 2020. Still, when comparing this margin improvement to Ozon, it's somewhat less impressive.

Ozon's operating margin is also briskly trending in the right direction while it's able to maintain strong demand growth. The company's operating margin improved from negative 31.7% to negative 17.7% (also during the first nine months of 2020). Both companies are working to profitability. It seems, however, that Ozon is far closer to realizing it, without needing to sacrifice revenue growth on the way.

2. The infrastructure is in place to support growth

Both Russia and Africa are relatively untapped markets from an e-commerce penetration perspective. That's great news for both companies. Specifically, every single country Jumia serves comes with an e-commerce usage rate (penetration rate) of 3% or less -- Russia's is 6%. For comparison, relatively young e-commerce market China's usage rate sits at 27.1%.

While both geographies are ripe for expansion, Russia will likely be an easier part of the world to grow in. Why? Despite Russia's relatively low e-commerce usage, its internet usage rate sits at a strong 83% -- the global average is 58.8%. By contrast, Africa as a continent enjoys an internet usage rate of 39.3%. Both companies will need broad connectivity if demand for their digitally native products is to continue blossoming. For Russia, this is a reality, while nations throughout Africa are still working toward higher internet usage rates.

For some evidence of Ozon's growth being easier than Jumia's, some recent product launch comparisons offer prime examples. In Jumia's case, it entered and then quickly exited nations such as Tanzania and Rwanda to focus more on more developed countries like Nigeria. Furthermore, Jumia has also shut down product releases such as its travel and ride-sharing businesses due to disappointing demand.

By contrast, Ozon continues to find success in its own travel business and has even launched banking and customer loyalty products to an extremely warm welcome. Its debit card issuance spiked nearly fivefold year over year in 2020. Consumers who have been issued a debit card are also buying products through Ozon 60% more frequently than non-holders. Ozon is not planning on shutting down any of these endeavors, perhaps because Russia has more infrastructure in place to support them.

Ozon is a stronger pick

Ozon's financial execution is simply better than Jumia's, and the part of the world it operates in offers an easier, more developed market for growth and profitability. As an investment, Jumia is certainly not the worst idea out there, but Ozon's combination of healthier performance and brighter prospects make it the better place to invest.

I own it for these reasons and think you should explore the company as well.

Here's Why I'm Excited About the Amazon of Russia

2 High-Growth Stocks That Could Soar