Please ensure Javascript is enabled for purposes of website accessibility
Log In Help Join The Motley Fool
Free Article Join Over 1 Million Premium Members And Get More In-Depth Stock Guidance and Research
By Rekha Khandelwal - Feb 18, 2021 at 7:32AM

Choosing the best of the two depends on your risk appetite.

Since its listing in July 2019, Sunnova Energy's (NOVA -0.57%) stock has risen a massive 375%, outperforming Sunrun's (RUN -1.24%) impressive 290% rise. The market's enthusiasm for renewable energy stocks got a further boost last year with the coming of a government that's more friendly to the industry, as well as the extension of an investment tax credit for solar developers. For Sunrun and Sunnova, a growing customer base in a highly competitive residential solar installation market is backing the rise in their stock prices. Let's see if one of the two solar stocks is a better buy right now.

Sunnova is small, but growing fast

Founded in 2007, Sunrun currently boasts over 500,000 customers -- more than five times Sunnova's customer base. At $15 billion, Sunrun's market capitalization is nearly triple that of Sunnova. But Sunnova's recent revenue growth is higher than Sunrun. 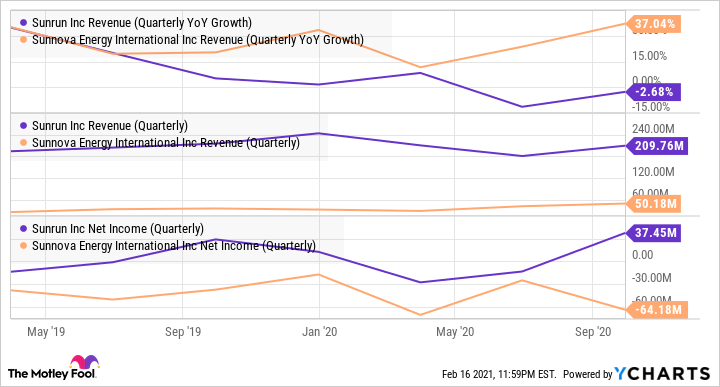 As the above graph shows, in the last five quarters, Sunnova's revenue growth exceeded Sunrun's growth. However, the same can't be said of the company's bottom line, as Sunnova has largely been generating losses. That's not necessarily a cause of concern right now as the company is focusing on growing its customer base and is a relatively new entrant in the market.

Another key thing to note is the way solar installers operate and make money. Depending on the customer's preference, companies either sell an installation to the customer for an upfront payment or lease it for a term typically ranging from 10 years to 25 years. In the second scenario, a more relevant way to measure performance is the company's "earning assets," which is essentially the present value of cash flows that the company expects to receive for the term of the agreement, plus the discounted estimated value of the installed system at the end of the term. 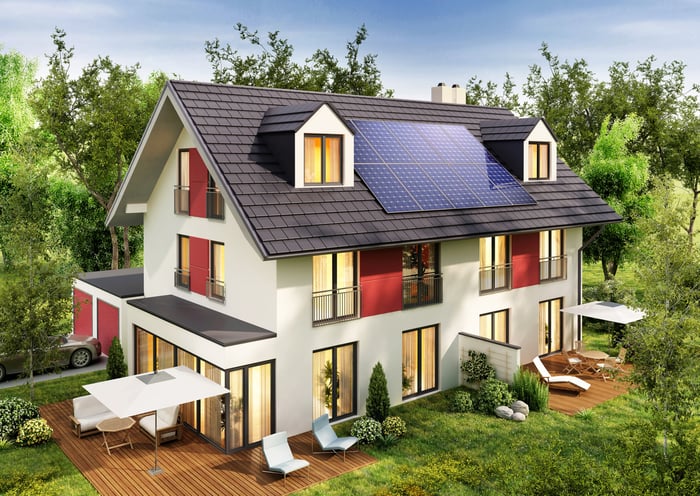 At the same time, Sunrun is looking at acquisitions to boost growth. It completed the acquisition of Vivint Solar in October of last year. After the acquisition, Sunrun's gross earning assets have risen to $6.9 billion -- 88% higher than at the end of 2019.

Residential solar installers face significant risks. The business model requires installations to be financed upfront, while the revenue is spread over several years. Thus, the companies' growth is dependent on access to cheap financing sources. That could be challenging, as evidenced by the troubles of SolarCity, Vivint Solar, and several others.

On the positive side, both of the companies are well placed to increase their share in the fragmented residential solar installation market.

Sunnova has recently expanded its revenue and customer base handsomely. However, like other installers, Sunnova is challenged by high customer acquisition costs and other expenses. The stock's recent rise has pushed its price-to-sales ratio to 28.

While that isn't the best valuation metric for solar installers, Sunnova's ratio is significantly higher than Sunrun's ratio of around 11. The market seems to be pricing in higher growth, which it could well achieve, but there are ample challenges to Sunnova's growth and path to profitability. Right now, it is growing off a low revenue and customer base. Higher growth in percentage terms is easier right now. But as it grows in size, it would be difficult to maintain such high growth rates.

So long as Sunnova can sustain its higher growth, its stock can continue commanding a premium valuation. To me, Sunnova seems to offer a bit better near-term growth potential but at a higher risk. By comparison, Sunrun is a more established player with a longer track record. Through the Vivint Solar acquisition, it is looking to make up for the slower organic growth. Sunrun's reasonable valuation, growth over the years, and greater scale after Vivint Solar acquisition makes it a better buy than Sunnova right now.