The energy company's midstream arm is also under pressure.

Antero Resources reported an adjusted net loss of $0.03 per share for the fourth quarter, compared to analysts' consensus expectation for a $0.04 per share profit. Lower realized hedging gains and higher expenses were the primary reasons for those poorer-than-anticipated results. 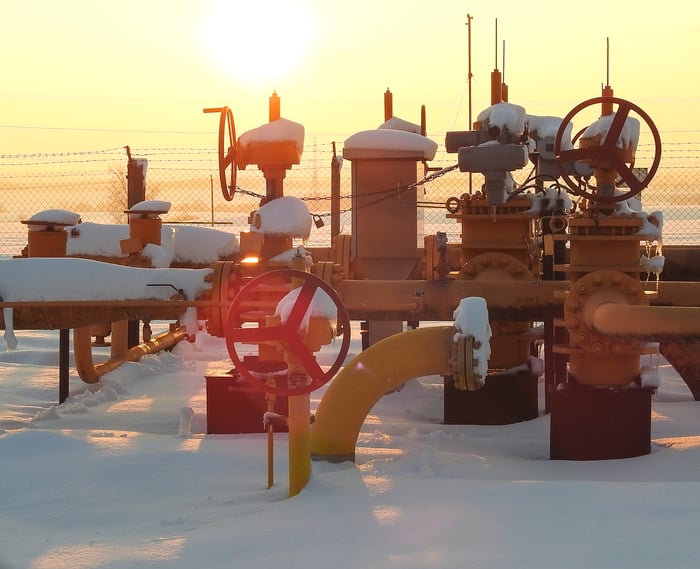 Antero Resources also unveiled its 2021 guidance. The company expects to spend $590 million on drilling and completing new wells this year, which should allow it to produce between 3.3 billion and 3.4 billion cubic feet of natural gas equivalent per day (Bcfe/d). That forecast represents a 21% budget decrease and a reduction from the 3.65 Bcfe/d it produced during the fourth quarter of 2020. However, that's due in part to a new $500 million to $550 million drilling partnership the company formed that will fund 60 additional wells through 2024. This partnership will fill some of Antero's unutilized pipeline transportation capacity while allowing it to receive additional gathering rebates through its agreement with Antero Midstream. The company anticipates that this partnership will enable it to generate an incremental $400 million of free cash flow through 2025 at current natural gas prices.

That drilling partnership will also impact Antero Midstream. First, it will need to invest an additional $65 million this year on capital projects to support the associated production. As a result, it's reducing its annual dividend from $1.23 per share to $0.90 per share, which will allow it to cover that outlay without increasing debt. However, this investment should enable the midstream company to generate an incremental $200 million in free cash flow after dividends through 2025, allowing it to reduce its leverage ratio to 3.0 or less over that period.

Antero Resources has been looking for ways to use more of the pipeline space it contracted since it must pay for the capacity even if it goes unused. This drilling partnership will allow the company to do that in a capital-efficient manner. However, it doesn't solve all of Antero Resources' issues since the company has a lot of debt and isn't generating enough cash to grow its production due to continued energy price volatility. Because of that, its stock price will likely remain quite volatile until there's a meaningful long-term recovery in natural gas demand and pricing.