The natural gas E&P play is benefiting from a perfect storm of conditions.

Shares of Antero Resources (AR 1.58%) jumped 37.1% for the month of September, according to data provided by S&P Global Market Intelligence, as conditions for natural gas exploration and production (E&P) stocks continued to improve. 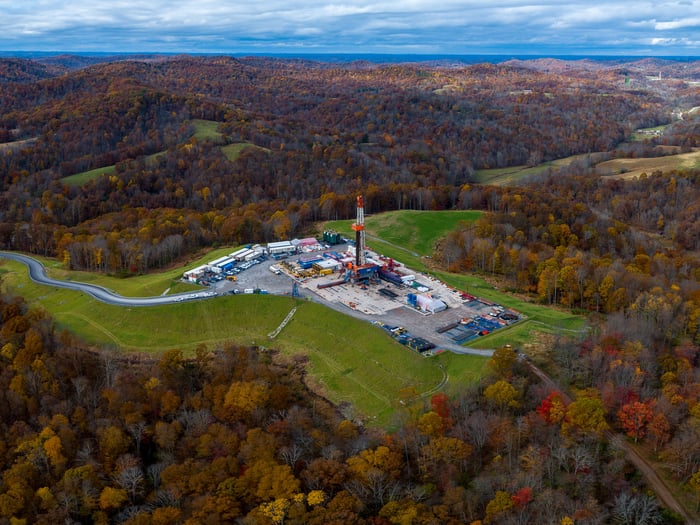 Gas prices were at record levels by the end of September and inventories here and abroad were depressed even as Hurricane Ida hampered production capabilities along the Gulf Coast. The region accounts for almost 51% of the total natural gas processing capacity in the U.S., according to the Energy Information Administration.

So even though Antero Resources is an E&P company in the Appalachian Basin primarily in West Virginia and Ohio, as the fourth largest gas producer in the country and the second-largest natural gas liquids producer based on reported production levels, it has benefited from the tailwinds lifting virtually all energy stocks.

Antero Resources is a financially solid player in a space known for volatility. It points out it has no near-term senior debt maturities for the next few years even as it resets its debt levels to protect its downside of a collapse in commodity prices. It is targeting a $2 billion absolute debt level (it has $3 billion in long-term debt currently), and the profits it is producing from this era of elevated pricing ought to help it readily achieve its goals.

The positive market conditions really began to become apparent in August when Antero's stock made a sharp move higher. Shares are up 250% in 2021 and are more than 650% higher over the past 12 months, yet it still trades at less than 10 times next year's earnings estimates and just four times the free cash flow it produces, making Antero Resources one of the cheap plays in the E&P space.

There doesn't seem to be any letup in the pressure pushing prices higher, and with the prospects for a colder than usual winter, the forces working in Antero's favor may be with the natural gas stock for a while longer.