Please ensure Javascript is enabled for purposes of website accessibility
Log In Help Join The Motley Fool
Free Article Join Over 1 Million Premium Members And Get More In-Depth Stock Guidance and Research
By Zhiyuan Sun - Updated Mar 4, 2021 at 10:34AM

The largest generic drug manufacturer in the world can be bought for pennies on the dollar.

That sentiment could not be more applicable to shares of Teva Pharmaceutical Industries (TEVA -0.44%). Since 2015, Teva stock has lost nearly 80% of its value in the face of loss of exclusivity on key branded drugs. In fact, Buffett still himself owns 42.8 million shares, or a 3.8% stake in the company. Will Teva be able to lead Buffett and contrarian investors alike to riches? 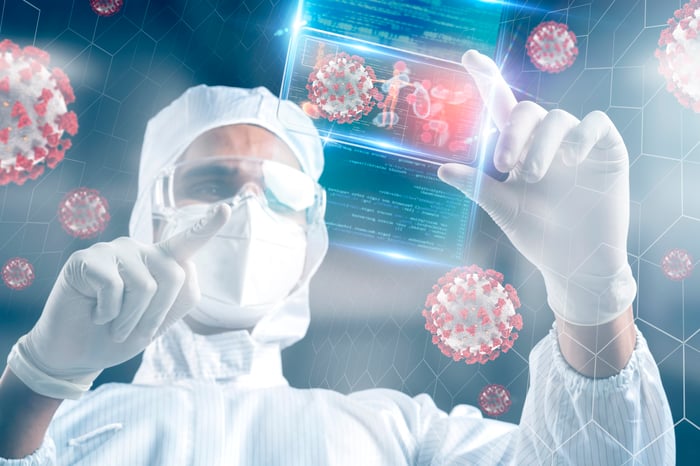 Teva is one of the cheapest pharma stocks out there, trading at a meager 0.7 times revenue and 4.3 times earnings. Meanwhile, the industry average stands at about 4.9 times sales and 34 times profits. This has left many investors wondering: What gives?

As it turns out, Teva is facing severe headwinds, as the U.S. Food and Drug Administration (FDA) approved a record number of generics in an attempt to drive down drug prices. Between 2014 and 2019, generic drug prices in the U.S. lost nearly 40% of their value.

In addition to this, its blockbuster multiple sclerosis drug, Copaxone, had its U.S. patent invalidated due to obviousness (as it only differed with regards to dosage and administration regimen from a prior art) in 2017, and has been declining ever since. Teva expects Copaxone sales to decline by $1.3 billion year over year in 2021 to $1.05 billion as the third generic entrant hits the market.

The good news is that all the negativity is mostly priced into Teva's stock -- and then some. The drugmaker's generic drug business has entered into a steady state in North America with about $4 billion in annual revenue. New launches, such as Autesdo for the treatment of Huntington's disease and side effects of antipsychotics drugs, as well as Ajovy for the treatment of migraine headaches, could add more than $1 billion in new revenue this year.

In 2020, Teva's sales declined by just 1% compared to 2019, to $16.7 billion. Against all odds, the drugmaker is still very profitable, generating about $2 billion in free cash flow and $2.57 in earnings per share (EPS) over the past year. However, it estimates that its revenue and earnings will largely remain unchanged in 2021 from 2020.

Over the past 12 months, the company reduced its debt obligations by $3.2 billion. By 2023, it expects to reduce its financial leverage, as defined by net debt divided by operating income less non-cash expenses (EBITDA), to less than three from 4.8 in 2020. A ratio of four or five usually indicates a company may default on its debt. It accumulated these liabilities after acquiring Allergan's generic arm for $40 billion in 2016.

The biggest risk ahead

Right now, Teva is facing over 2,300 federal lawsuits from states, municipalities, and counties regarding its role in exacerbating the opioid crisis. In the past decade, the company allegedly downplayed the risk of developing an addiction to opioids and overstated their benefits in consumer marketing. Teva controls approximately 6% market share in the branded opioid industry.

While that may seem like very little, many people are angry over the roles big pharma played in opioid-related overdose deaths across the U.S. Between 2019 and 2020, Teva's competitor Johnson & Johnson (JNJ 0.91%) has dished out $5 billion to settle opioid lawsuits with state attorneys general. That is despite the company only having an 8% market share in branded opioids. Teva proposes to remedy its part in the opioid crisis by giving out addiction-treatment Suboxone free of charge to healthcare facilities in affected areas.

Given its large debt load, Teva could very well face bankruptcy if it dishes out too much in legal payments. On its fourth quarter 2020 earnings call, Teva CEO Kare Schultz said that the company would not have the capital for a lump sum $5 billion settlement payment. Luckily, Schultz did say that Teva was very close to reaching a agreement with litigators.

Its best case scenario would be its 2019 offer of $250 million in cash and $23 billion in Suboxone (based on the drug's list price), both distributed over 10 years. Keep in mind, the $23 billion quoted is the list price of the drug. Its bills account for only labor, materials, and distribution costs, as there would be no mark-up for the drug. Analysts expect the company will only spend between $1.5 billion to $9.2 billion in total manufacturing costs.

If Teva can get a structured settlement for its opioid woes, it would trade at just eight times earnings, assuming half of its cash flows go to legal obligations for the next decade. By then, the launch of new branded medications would have more than made up for its shortfalls. For those looking for an absolute bargain healthcare stock, Teva could still be a safe value bet.