There are still more pitfalls and potholes ahead, despite an expected rebound in 2021.

The good news is, Macy's (M 1.57%) is expected to post better results in 2021 than it did during COVID-crimped 2020; analysts even believe it will swing back to a profit. The bad news is, that's the only good news of any real consequence to come out of the iconic department store chain lately.

The company is only recovering back into a lousy environment for brick-and-mortar retailing -- an environment that's been chipping away at Macy's top and bottom lines since 2014. Once this year's rebound is in the rearview mirror, that headwind is expected to pick up again.

So no, Macy's stock isn't a buy, and it's certainly not a buy when so many better investment opportunities are out there. Let's look at some more of the reasons why. 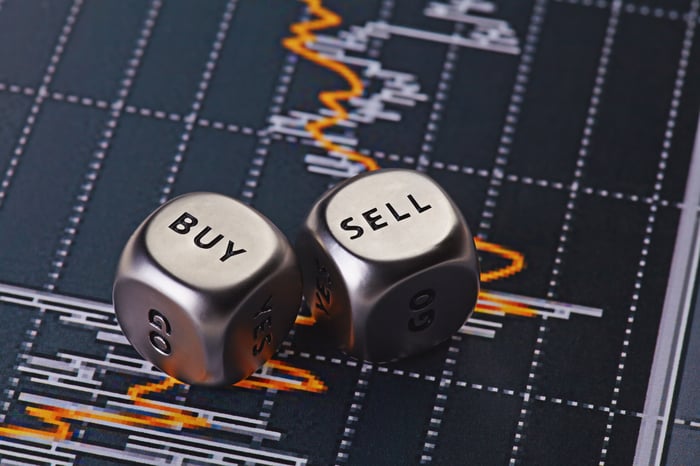 Better than 2020, but that's not saying much

Being better than 2020 is not necessarily a premise most investors agree with at the moment. While trading below its pre-pandemic peak and off from the 52-week high hit during January's market surge, Macy's shares are still valued at more than twice their price from early November 2020. Investors clearly think the company is on the road to recovery, fueled by a combination of COVID-19 vaccines, news of more store closures, and a reasonably successful acceleration of its e-commerce business.

But then what? The problems that plagued the company before the pandemic will still be in place once it passes.

Chief among those problems is the continued growth of online apparel shopping. Common Thread Co. estimates the apparel e-commerce market will generate $953 billion worth of revenue in 2024, nearly doubling 2018's figure of $439 billion. That's seemingly good news, as Macy's sells plenty of goods online. Its third-quarter digital sales grew 27% year over year, accounting for 38% of the chain's total sales. But the internet is still a great equalizer, making all brands equally accessible to all shoppers. The pace of Macy's online sales growth won't likely last, and analysts don't expect it to be enough to prevent sales and earnings from leveling off by 2023. Beyond that, the bigger-picture downtrends are apt to kick in again. 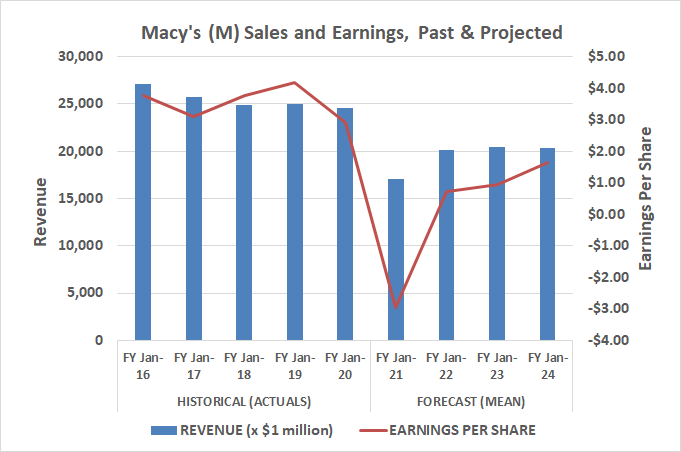 Only this time, the company will be easing back into the new normal with more liabilities -- around $6.65 billion worth -- more long-term debt than it's serviced in years, and with fewer assets (like real estate) to monetize. 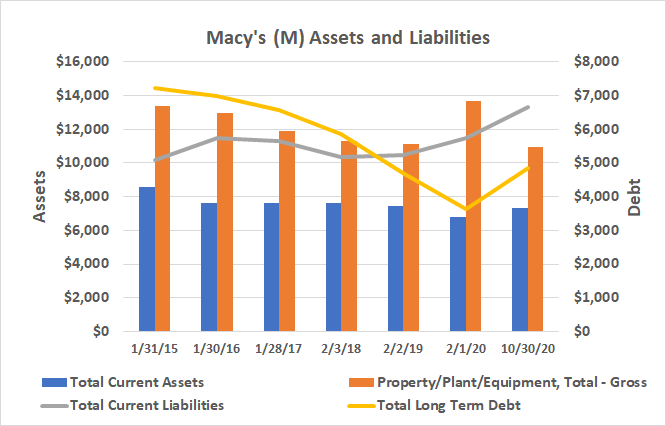 Data source: Thomson Reuters. All figures are in millions of dollars.

Simply put, Macy's will need to do more with less in the very near future, and do so in a retailing environment that doesn't particularly favor traditional brick-and-mortar, mall-based department stores. Perpetually playing defense isn't going to be enough.

Fans and shareholders of the company will point out Macy's is adapting. For instance, its off-mall concept has promise. These smaller strip mall-based stores called Market by Macy's will make for shorter and faster shopping excursions. The retailer has also clearly done well on the e-commerce front of late, augmenting its existing fulfillment apparatus by setting up actual stores to do the same fulfillment work.

Consider the backdrop, however. E-commerce is a growing proportion of Macy's total business because in-store traffic has been minimal in the midst of the coronavirus contagion. Also bear in mind that while Market by Macy's is a savvy move, the company only opened its second such store last month. A year ago the chain said it would be closing 125 of its then-775 locations within the next three years. The company only closed around 30 of these stores in 2020, and it recently announced roughly 45 were on the chopping block this year. That leaves another 50 to shed in 2022 or later. Not only does each closure represent an expense, but it also means less revenue -- and prospectively less cash flow -- to fund ongoing operations and new initiatives. And if Market by Macy's is going to be of any fiscal benefit to the company, the company's going to have to move faster with the idea.

And there's the rub. With the exception of more investments in private label apparel, Macy's Polaris revitalization strategy unveiled a year ago doesn't include much more than store closures and off-mall locales. The company needs a bigger, deeper plan.

Much more risk than reward

Macy's may well find a way to dig itself out of the hole it's presently in. Given the uncertainty of its recovery and its turnaround timeframe, though, there's just too much risk for most investors to bite off. The stock's recent run-up only inflates that risk. If anything, this rally is a profit-taking opportunity.

Macy's will post its fourth-quarter numbers on Tuesday, adding new color to any discussion of its Polaris plan and turnaround efforts.