Please ensure Javascript is enabled for purposes of website accessibility
Log In Help Join The Motley Fool
Free Article Join Over 1 Million Premium Members And Get More In-Depth Stock Guidance and Research
By Nicholas Rossolillo - Feb 23, 2021 at 6:06AM

History says now isn't the time to fret, especially for investors who don't need their money for at least a few years or more.

Almost a year from the start of the pandemic, the stock market (as measured by the S&P 500) is up 18%. At all-time highs with the pandemic still going on, a crash must be imminent, right?

Probably not. We're due for a bout of volatility, but the market's behavior in the last year isn't without historical precedent. Make some adjustments based on your goals (if they've changed), but the average investor should just keep their heads down, keep on investing, and enjoy the next economic expansion for the next few years.

A stock market crash is loosely defined as a double-digit percentage decline in stock prices over the course of a few days. Market corrections, which can take longer, are actually quite common. Since the early 1900s, the S&P 500 has tended to fall 5% from recent highs a few times a year -- and notches a steeper 10% or more plunge about once every year to year and a half. These events are usually temporary and reverse course again quickly.

But when many investors think about a crash, they're thinking about a bigger drop of 20% or more -- or even a bear market in which stocks fall and stay down for a prolonged period of time. These 20% declines are more rare (about every seven years or so on average). Normally, a market crash and ensuing bear market corresponds with the start of an economic recession, like the one that happened last spring at the beginning of the pandemic. Therefore, historically speaking, the crash many investors are looking for arguably already happened.

Long story short, while history does rhyme, it's a mistake to expect what just happened in the recent past to repeat itself over and over again. A big market crash like what happened in early 2020 isn't a given just because the market has advanced since then. This market rally is totally normal

But is it really normal for the stock market to rally like it has in the last year, especially given the real pain that's going on out there? Many small businesses and households -- even some bigger businesses in brick-and-mortar retail, travel, and dining -- have been deeply affected by COVID-19.

However, a stock market rally even in the midst of an ongoing crisis is actually normal. Take the last big crash in 2008-2009 during the Great Recession. After plunging one last time in March 2009 (after a terrible 2008 in which the market fell 37%), the S&P 500 proceeded to rebound and finished the year up 26%. 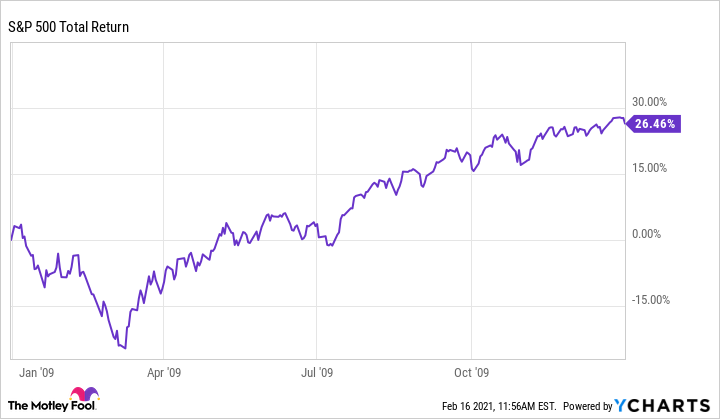 Granted, no two crises are alike, but the market has behaved in a similar fashion over the last year. Just as stocks started to make a comeback while the financial crisis-induced recession was still raging in 2009, so it is during this current recession brought on by the pandemic. Stock prices are driven by future expectations, not what is happening in the moment. And businesses are adapting and returning to pre-pandemic financial health. Some are actually thriving (more on that in a moment). The end result is a rallying stock market that is seemingly detached from reality. 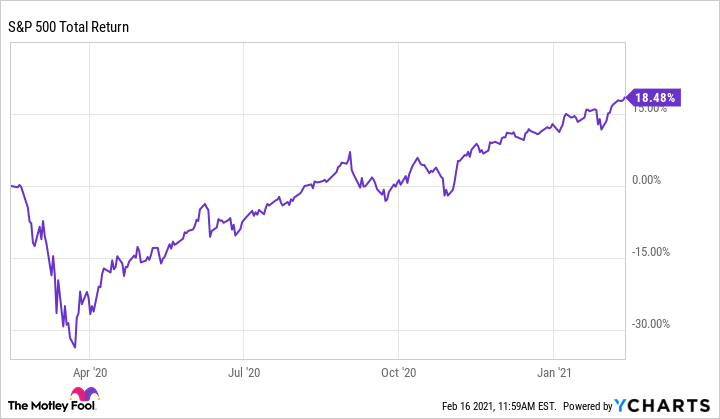 But are stocks "expensive?" Bear in mind valuation of stocks is subjective, but it is true that the stock market (again measured by the S&P 500) is trading at a historically high price-to-earnings level. Again, this is normal. It isn't only driven by the "price" part of the equation (namely, stocks going up). P/E ratios are also calculated using earnings, or company profitability. And many companies are still operating at a loss, or just beginning to turn to profitability. As their financials improve over time, P/E ratios will moderate, just as they did over a decade ago. 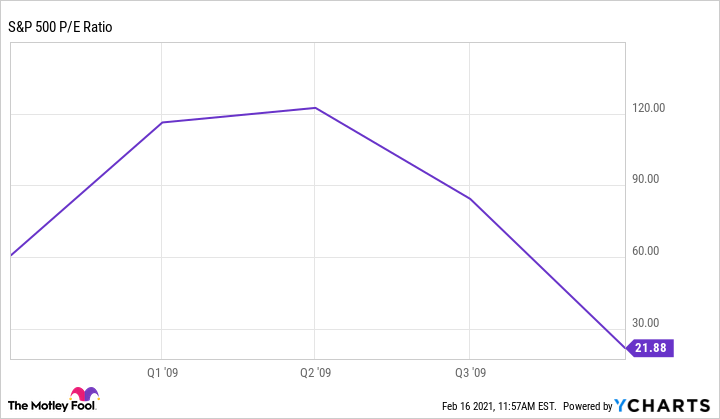 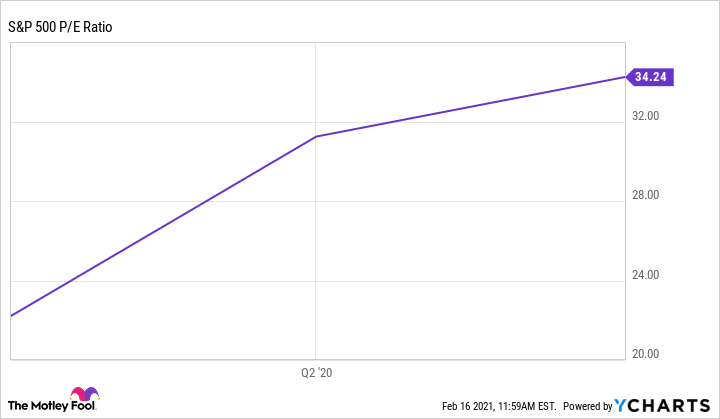 Usually a recession -- an economic event that causes the really big crashes -- is caused by a sudden slowdown in spending. And right at the moment, there's lots of cash sloshing around the economy and more on the way. The Federal Reserve has also promised to keep short-term interest rates near zero for a couple of years to help ensure all that cash keeps circulating through the financial system (in simple terms, low interest rates encourage spending). I don't see any sudden contraction in economic activity looming. On the contrary, economic activity should continue to increase in the coming years as effects of the pandemic subside.

There's also a new stimulus of sorts keeping money moving through the economy: technology. Big tech outfits like FAANG stock Amazon (AMZN 0.25%) are heavy spenders to promote growth rather than concerning themselves with maximizing profits. Smaller tech firms intentionally spend in excess of what they make in sales (using up some cash on their balance sheet) on research, development, and sales and marketing. The low interest rate environment is boosting this rate of heavy investment into tech. Hundreds of billions of dollars are being spent each year in this way and that is also keeping money circulating in the economy.

That's not to say areas of the market won't "crash." There's a difference between a tech company that intentionally operates at a minimum profit or even at a loss (like Amazon, for example, or many smaller cloud computing companies) and a company operating at a loss because it doesn't generate enough revenue to pay the bills (electric vehicle companies trying to cash in on the success of Tesla (TSLA -6.42%), for example). Be wary of the difference between the two. Stocks that rise sharply in value without any actual financial growth could develop into a bubble.

But pockets of the stock market "crash" all the time. That doesn't mean the market overall will follow suit. In fact, at the beginning of a new period of economic expansion, there's likely at least a few years of upside for the stock market -- with technology (and companies making good use of tech) leading the way higher. There will be bumps in the road along the way, but those bumps are more than likely to be temporary at best given the amount of stimulus being pumped into the economy and the level of innovation taking place. Now isn't the time to wait around for a crash.