Please ensure Javascript is enabled for purposes of website accessibility
Log In Help Join The Motley Fool
Free Article Join Over 1 Million Premium Members And Get More In-Depth Stock Guidance and Research
By Adria Cimino - Feb 24, 2021 at 6:17AM

These elements set it apart from the vaccines currently on the market.

Johnson & Johnson's (JNJ 1.75%) big moment is right around the corner. A U.S. Food and Drug Administration (FDA) committee meets on Friday to advise on a possible Emergency Use Authorization (EUA) for the company's coronavirus vaccine candidate.

The FDA already granted EUAs for vaccines to two companies: Pfizer (PFE 3.59%) and Moderna (MRNA -4.97%). Johnson & Johnson's efficacy data aren't as high as those of these more advanced rivals. And the U.S. just ordered enough of the Pfizer and Moderna vaccines to cover nearly the entire population. So the situation is less urgent than it was when Pfizer and Moderna requested EUAs. Still, it's very likely the FDA will grant Johnson & Johnson authorization as early as next week. Here are two reasons why. 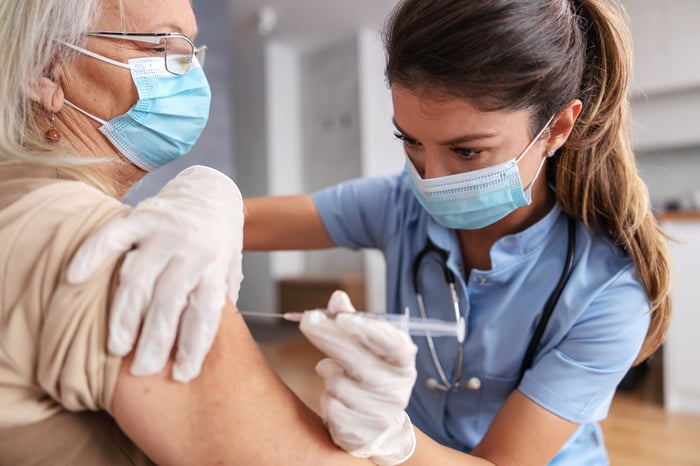 1. The fight against new strains

One of the biggest risks vaccine makers (and the rest of us) face these days is the threat of new coronavirus strains. At the moment, the U.K., Brazilian, and South African strains are becoming more prevalent in their places of origin and beyond. White House Medical Advisor Dr. Anthony Fauci has spoken publicly about the fact that while current vaccines are working, they are less effective against new strains.

Johnson & Johnson's big advantage is that it conducted its trials as these new strains were gaining steam in various populations. And the pharmaceutical company's trials took place in the areas most affected. The investigational vaccine demonstrated 66% efficacy in Latin America and 57% efficacy in South Africa. It showed 72% efficacy in the U.S., where the U.K. strain is gaining ground.

These numbers aren't as exciting as the more-than-94% efficacy of the Pfizer and Moderna vaccines. But we should keep in mind two important points. First, the Pfizer and Moderna trials took place prior to the increase in variants. So their performance was measured mainly against the original coronavirus strains. Like those two companies, Johnson & Johnson also designed a vaccine to fight the original coronavirus. But in phase 3, it found itself facing a growing number of variants.

Second, the FDA originally set a bar of 50% efficacy for emergency authorization. Even facing new strains, Johnson & Johnson has topped that.

What's another challenge facing healthcare providers these days? Getting people that much-needed second dose of vaccine. Supply shortages in many areas are not uncommon -- it has been a real concern since rollouts began. The U.K. even opted to delay the second dose of vaccine in an attempt to ramp up the rate of primary vaccinations.

With Johnson & Johnson's candidate, this wouldn't be an issue. The company's investigational product involves only one dose. This is an advantage for patients because it means only one visit to a vaccination site instead of two.

The advantage is even greater for providers. Johnson & Johnson aims to supply 100 million doses to the U.S. in the first half of the year. And it pledges to begin shipping product immediately following authorization. The key point here is that this number of doses will cover 100 million people. So supply can go a lot further than it could if this were a two-dose vaccine.

Healthcare providers also will breathe a sigh of relief another reason: They won't have the logistical nightmare of managing two-dose administration. Right now they have to vaccinate patients and at the same time plan ahead so each person will have a second dose at the appropriate time. A one-dose product will streamline and simplify the entire vaccination process.

Johnson & Johnson has promised to sell the vaccine without taking a profit during the pandemic. And, as mentioned above, the U.S. has already ordered enough doses from its rivals to vaccinate the entire population. So Johnson & Johnson won't benefit right away. But I expect it will in the future.

Once the pandemic is over, Johnson & Johnson will be able to take a profit from vaccine sales worldwide. At that time governments will likely order doses regularly -- perhaps annually. (Companies and researchers still haven't said how often people will need to be vaccinated.) If future vaccinations are required, though, we can expect a one-dose vaccine that performs well against strains to be a patient and provider favorite. And that's good long-term news for investors in this pharmaceutical giant.