Please ensure Javascript is enabled for purposes of website accessibility
Log In Help Join The Motley Fool
Free Article Join Over 1 Million Premium Members And Get More In-Depth Stock Guidance and Research
By Evan Niu, CFA - Feb 24, 2021 at 11:37AM

Shares of ArcLight Clean Transition (ACTC) popped as much as 12% this morning after Proterra, which is merging with the special purpose acquisition company (SPAC), scored part of a landmark deal for electric school buses. As of 11:10 a.m. EST, the stock was up 6%.

The board of education in Maryland's Montgomery County, a suburb just outside of Washington, D.C., has approved a massive contract for electric school buses, the largest municipal deal for buses ever. The contract to lease over 300 electric buses spans 16 years and is valued at $169 million. The county is working to upgrade its entire bus fleet of over 1,400 vehicles over the next 20 years. 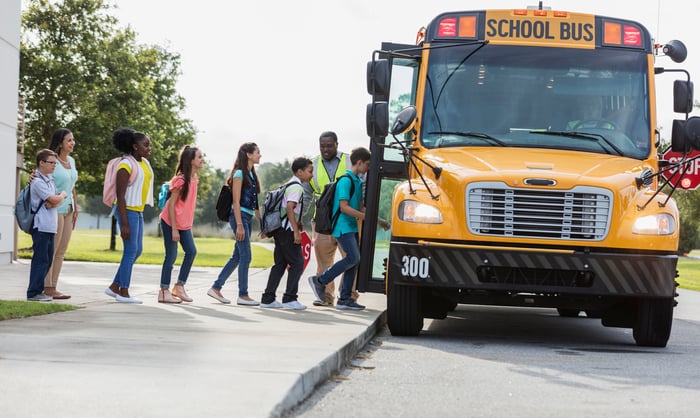 Daimler subsidiary Thomas Built Buses will manufacture the buses, which will leverage Proterra's electrification technology. Proterra and Thomas Built Buses initially partnered  back in 2018 to introduce electric school buses and had previously started delivering electric school buses in Virginia in late 2020 under a different contract. ArcLight Clean Transition announced last month that it would merge with Proterra to take it public, with Daimler participating in the PIPE (private investment in public equity).

While the Biden administration has committed to supporting electric vehicle (EV) adoption, the deal is not dependent on federal grants. The county is hoping to reduce costs by transitioning away from diesel buses, pursuing savings from fuel and maintenance. The first 25 buses are expected to be delivered by the end of the year, with roughly 60 more vehicles delivered in 2022.

Proterra's merger with ArcLight is expected to close in the first half of 2021.