Please ensure Javascript is enabled for purposes of website accessibility
Log In Help Join The Motley Fool
Free Article Join Over 1 Million Premium Members And Get More In-Depth Stock Guidance and Research
By Billy Duberstein - Apr 6, 2021 at 9:51AM

March was a difficult month for electric vehicle stocks, which fell along with other low-profit growth stocks as investors rotated toward more value stocks and reopening plays. Additionally, the commercial EV space is currently experiencing a battery cell shortage. 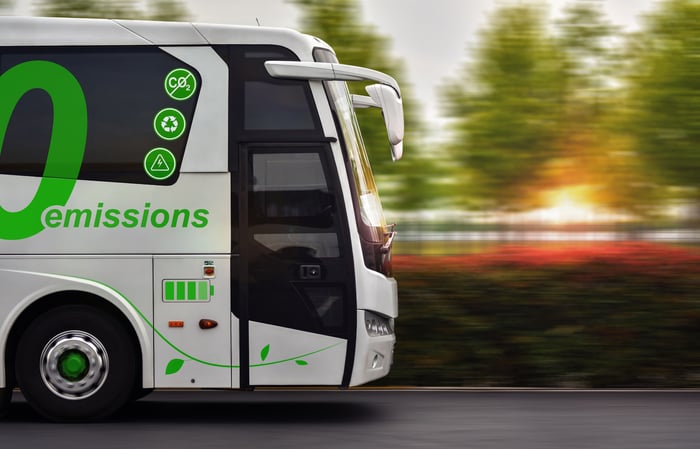 In January, ArcLight announced it would be buying a minority stake in Proterra, a commercial electric vehicle company that makes battery packs, electric drivetrains, and charging stations, along with a big data software platform that monitors and integrates all three technologies together.

Investors cheered the acquisition, bidding shares up to a high of $31 at one point, from $10 pre-announcement. However, as was the case with many SPACs, IPOs, and growth stocks, the mini-bubble burst in March, as a faster vaccine rollout caused concerns over inflation, with long-term interest rates rising during the month. Rising interest rates are especially bad for growth stocks, with most of their earnings off in the future, and ArcLight was not spared.

Not helping matters is a battery cell shortage in the commercial electric vehicle space that is currently affecting all players involved. While Proterra hasn't commented on the shortage, several of its peers have. Just a week ago, Tesla CEO Elon Musk said the current cell shortage may delay production of the company's semitruck.

Even though the battery cell shortage may affect this year's numbers, having too much demand is generally the best kind of business problem to have. Yet the fact that several young EV SPACs will likely miss their revenue forecasts their first year as public companies has soured some on the sector.

Still, younger investors with a high risk tolerance may wish to take a look at ArcLight/Proterra along with its peers after the March swoon. Vehicle electrification should be a decade-long tailwind, albeit with a few bumps along the way.