Please ensure Javascript is enabled for purposes of website accessibility
Log In Help Join The Motley Fool
Free Article Join Over 1 Million Premium Members And Get More In-Depth Stock Guidance and Research
By Will Healy - Feb 25, 2021 at 8:21AM

These factors should keep T-Mobile a step ahead of its competition.

T-Mobile (TMUS 0.13%) has connected with both customers and investors as it integrates Sprint's assets from its merger last spring. With its expansion, T-Mobile took a huge step in closing the size gap with its larger rivals, AT&T (T 0.94%) and Verizon (VZ 0.88%). As that growth continues, investors looking to profit from T-Mobile's success should focus their attention on three key factors: 5G, licensed spectrum, and growth.

Most investors know that 5G will drive T-Mobile's immediate future. Along with AT&T and Verizon, it serves as one of only three providers of 5G service in the U.S.

Both T-Mobile and its peers have each spent tens of billions of dollars constructing such a network. In 2020 alone, T-Mobile spent more than $11 billion on purchases of property and equipment. An outside competitor will likely not match this level of spending merely to become another 5G provider. Hence, 5G will probably remain an oligopoly dominated by three companies. 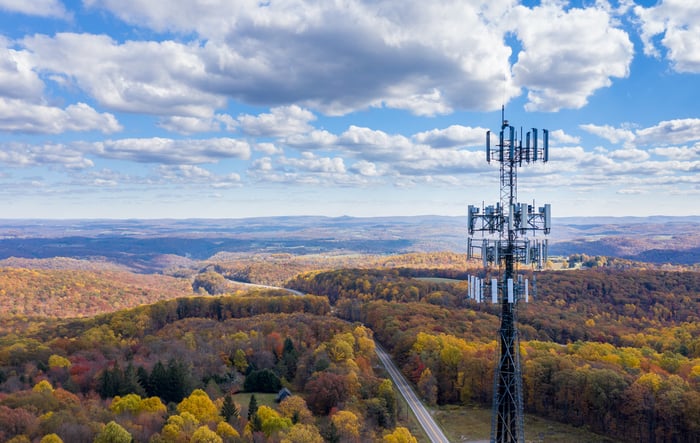 Moreover, 5G supports speeds of up to 300 megabytes per second (Mbps) or higher, faster than the typical 4G speed of 12-36 Mbps. Thanks to this technology, a movie that once took six minutes to download will transfer in as fast as 15 seconds. Such speeds could foster new technologies that could become additional revenue sources. Although analysts cannot fully define or quantify this benefit, for now, such potential should help bolster T-Mobile's long-term growth by strengthening 5G demand.

One other advantage that should reinforce the company's expansion involves T-Mobile's portfolio of wireless spectrum. Investors should view spectrum as the wireless equivalent of real estate. It gives the owner exclusive usage rights over a specific range of frequencies in a given area.

The company gained a tremendous amount of prime spectrum when it bought Sprint, and that spectrum added depth to some existing 5G networks. Also, in one spectrum auction in 2017, T-Mobile obtained 45% of all low-band spectrum sold -- enough to cover 100% of the U.S.

Thanks to T-Mobile's success in this area, AT&T and Verizon filed complaints with the Federal Communications Commission (FCC) last September regarding T-Mobile's spectrum portfolio. T-Mobile fought back, charging its peers with buying and holding spectrum to prevent its use by T-Mobile.

The FCC has so far not involved itself directly in this dispute. Nonetheless, with telcos awaiting the results of the C-band auction for additional 5G spectrum that took place in January and February, this battle could reignite. Given the implications for network development, observers will watch this closely. However, T-Mobile's commitment to expanding its service through its existing spectrum could bode well for the company's holdings.

3. The growth of T-Mobile

These holdings help T-Mobile control about 29% of the current wireless market, according to Evercore ISI Research. On the Q4 2020 earnings call, CEO Mike Sievert called out T-Mobile's rivals and their ability to "overcharge" based on "perceived network quality," an apparent weakness that has long plagued the company. RootMetrics ranked T-Mobile behind Verizon and AT&T for overall network quality in 2020.

Now, T-Mobile seeks to offer what it calls "the best value and the best network" in hopes of attracting prime customers and enterprises who need the best network experience available. Obtaining more high-quality spectrum should help in that area. T-Mobile invested more than $1.3 billion in new spectrum in 2020, not including the spectrum from the Sprint merger.

Also, T-Mobile generated only $658 million in free cash flow in 2020. While it holds nearly $10.4 billion in cash, merger costs took long-term debt to more than $61.8 billion, up from $11 billion at the end of 2019. With T-Mobile worth about $65.3 billion after subtracting liabilities from assets, it may have little room for additional spectrum purchases.

Despite its challenges, T-Mobile remains the wireless industry's growth leader. Its 5.6 million customer additions surpassed AT&T's 1.6 million wireless net additions and that of Verizon, which lost wireless customers over the last year.

In the past, T-Mobile won customers by competing primarily on price. However, with the added spectrum, the company has also made network improvements to attract more quality-conscious customers. Additionally, J.D. Power ranked T-Mobile No. 1 for wireless customer care for the ninth year. This customer service likely helps T-Mobile with customer retention.

As these additions took place, T-Mobile's stock grew by approximately 20% over the last 12 months. Consequently, it beat the S&P 500 and the two other wireless providers, whose stocks lost value during that time. 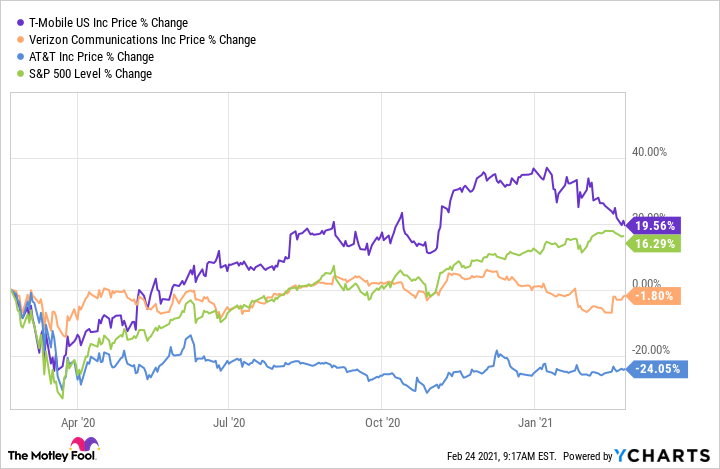 Still, this performance will come at a higher cost for investors. T-Mobile's 42 P/E ratio has risen well above the valuations of AT&T and Verizon, whose earnings multiples remain in the teens. Also, T-Mobile remains the only one of the 5G providers not to offer a dividend. Nonetheless, as long as T-Mobile continues to grab market share from its rivals, its stock may continue to outperform that of AT&T and Verizon.

Where T-Mobile goes from here

T-Mobile will continue to battle its deeply entrenched rivals. However, its 5G offerings should position the company to attract new customers. Moreover, the spectrum acquisitions will likely reinforce this offering as its faster pace of net additions and stock price growth perpetuate its outperformance relative to AT&T and Verizon. Assuming T-Mobile's customer base and spectrum portfolio continue to expand, the telecom stock should continue connecting with investors.