Shares of Wayfair (W 4.85%) jumped as much as 16% this morning after the company reported fourth-quarter earnings. The resulted were mixed compared to expectations, but investors were impressed with Wayfair's outlook. As of 12:30 p.m. EST, the stock was up 3%.

Revenue in the fourth quarter increased 45% to $3.67 billion, missing the consensus estimate of $3.77 billion. That resulted in adjusted earnings per share of $1.24, which beat Wall Street's forecast of $0.91 per share in adjusted profits. The e-commerce company, which specializes in furniture, said active customers reached 31.2 million, and average orders per customer increased to 1.96. Repeat customers represented 73% of total orders. 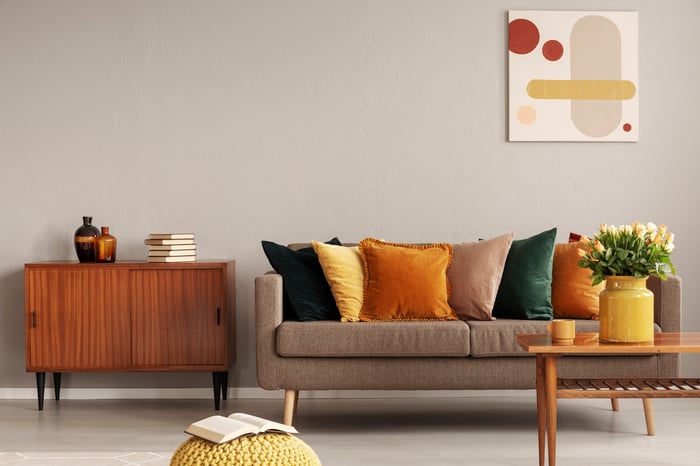 "Online shopping behavior is becoming increasingly entrenched and consumer demand for the home category remains strong," CEO Niraj Shah said in a statement. "Wayfair is capitalizing on these tailwinds by delivering a truly differentiated experience for both customers and suppliers."

Wayfair said the first quarter was trending toward 50% growth so far, which would represent acceleration from the fourth quarter. Analysts are only modeling for 43% sales growth in the first quarter.

In a letter to shareholders, management pointed out that Wayfair has captured less than 2% of its total addressable market, which it estimates is worth $800 billion and growing. In order to expand its market share, the company said it plans to invest in new categories and services, grow its customer base further, and improve the supplier experience.