Please ensure Javascript is enabled for purposes of website accessibility
Log In Help Join The Motley Fool
Free Article Join Over 1 Million Premium Members And Get More In-Depth Stock Guidance and Research
By Jason Hawthorne - Feb 27, 2021 at 8:43AM

Vaccine and product developments could boost growth for the healthcare icon.

When thinking about a company founded in 1886, it's tempting to focus on the past. That's especially true when that company is Johnson & Johnson (JNJ 1.75%). The healthcare giant is famous for its seminal consumer brands and diverse sources of revenue across virtually every sector of the healthcare industry.

However, there are at least three things that should have today's investors excited about its future. Positive data from a vaccine trial, a return to normal for the healthcare system, and the prospect of an exciting new surgical platform could move the conversation away from the company's history toward new sources of growth on the horizon. 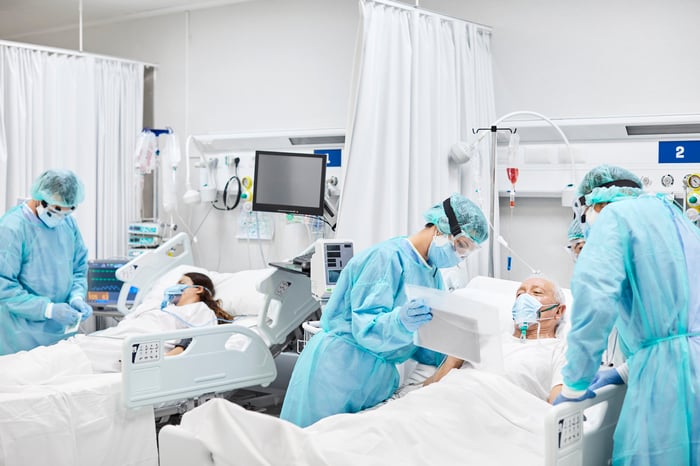 The U.S. Food and Drug Administration (FDA) recently posted data from a clinical trial saying Johnson & Johnson had met the requirements to obtain emergency use authorization for its COVID-19 vaccine. The single-shot vaccine was 72% effective in the U.S. and 64% effective in South Africa, where a variant of the SARS-CoV-2 virus is spreading. The news is especially welcome because the drug only requires normal refrigeration, making it easier to distribute. Vaccines from Moderna and Pfizer both require special deep-freeze storage, a factor that has slowed vaccine rollouts to date.

Although it did not meet the high efficacy bar set by the two-dose vaccines, the 72% protection easily clears the 50% FDA hurdle for authorization. It is also significantly more effective than the flu vaccine has been in any year over the past decade. Perhaps more importantly, the vaccine proved 86% effective at preventing severe cases of COVID-19 in the U.S. and 82% in South Africa. This means that even if an inoculated person gets sick, there's a much lower chance of hospitalization or death.

With 66 million Americans already vaccinated and hospitalizations declining, the healthcare system is beginning to return to normal. On its February earnings call, the CEO of the country's largest health system, HCA Healthcare, projected a more normalized environment in the back half of 2021, expecting those who have deferred care during the pandemic to begin seeking treatment. These comments give hope to companies that rely on surgeries for revenue.

That includes Johnson & Johnson's medical device business. Revenue in the unit was down 1% in the fourth quarter, a promising sign in a year that saw the segment's revenue decline 12% for the full 12 months.

Although the company expects some pandemic-related disruption to continue through the first quarter, it is forecasting positive sales comparisons to 2020 for the medical device business for the remainder of the year.

Johnson & Johnson may not be the first company to come to mind when robotic-assisted surgery is discussed, but management is working to change that, targeting the space over the next several decades as it brings three robotics platforms to market under the leadership of Dr. Frederic Moll, founder of Intuitive Surgical. The company's Velys and Monarch platforms are designed for orthopedics and bronchoscopy, respectively, but the real buzz is around the Ottava general surgery platform. All three are the result of either acquisitions or joint ventures of which the company assumed control.

The Monarch platform is currently on the market and may eventually be used to perform biopsies on and diagnose lung cancer patients. In January, the FDA cleared the Velys robotic-assisted solution for total knee replacement, and management plans to bring that product to market later this year. Ottava was only unveiled in November. The six-armed device (compared with three or four arms for rival systems) is integrated into an operating room table and designed to support a wide range of surgeries. Management is hoping hospitals would rather buy one universal device rather than multiple robotic systems. Human trials are expected to begin in the second half of 2022, and analysts believe the earliest the robotic system could hit the market would be late 2023.

Is it the right time to buy?

Despite its immense market capitalization of nearly $400 billion, Johnson & Johnson is not resting on its laurels. The company has developed the only effective single-shot COVID-19 vaccine to date and has allocated capital to assemble a portfolio of robotic-assisted surgery offerings it hopes will make it a leader in the field over the next several decades.

For investors who want a healthcare stock with a healthy dividend, but are nervous about patent litigation or clinical trials affecting the price, Johnson & Johnson might be the perfect fit. Although the company has risks like any other, its size and diversification offer insulation against the failure of any one product or lawsuit. Management recently set aside $3.9 billion for legal expenses including the 25,000 lawsuits it faces over claims that its talc baby powder causes cancer. Despite the amount, the company has proven over time that it can withstand these large financial hits.

Unlike the S&P 500, which is trading at an average of about 50% above its five-year average forward price-to-earnings (P/E) ratio, Johnson & Johnson's forward P/E in line with its average over the past half decade. That alone could make it the right time to buy the stock. Add in the positive developments on the horizon, and the company's stock could bring both appreciation and security to a portfolio.