Please ensure Javascript is enabled for purposes of website accessibility
Log In Help Join The Motley Fool
Free Article Join Over 1 Million Premium Members And Get More In-Depth Stock Guidance and Research
By Alexander Carchidi - Feb 27, 2021 at 8:09AM

If you've never heard of Charlotte's Web (CWBHF 10.64%), it's easy to see why the title of this article might be perplexing. Of course, the company's line of business, cannabidiol (CBD) wellness products, has nothing to do with the identically named book about farm animals and spiders, which should clear up some confusion.

Charlotte's Web made a name for itself by being the most visible source for CBD wellness products like skin creams and oils. But, as the U.S. inches toward marijuana legalization and the field of competitors selling both CBD and recreational marijuana products grows more crowded, Charlotte's Web is struggling to turn a profit. Over the last couple of years, its stock price has collapsed by more than 60%, and management isn't offering many clues as to how it could bounce back. Is the company's heyday long gone and never to return, or is there an opportunity for investors to benefit from a turnaround? 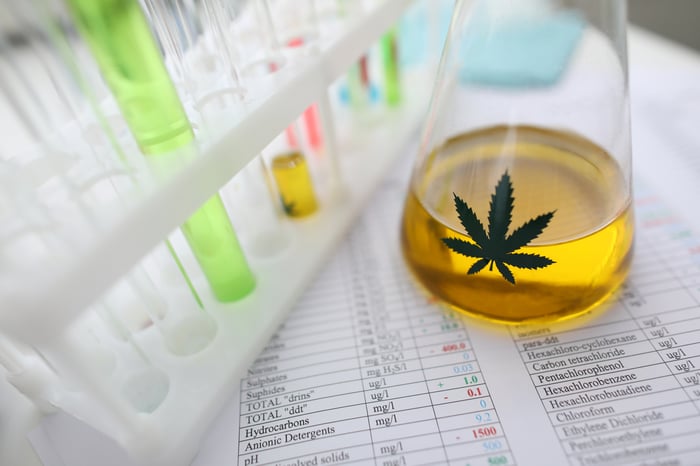 Charlotte's Web focuses exclusively on cannabidiol (CBD) products -- not recreational or medicinal marijuana. That strategy allowed it to get traction in markets like the U.S. before marijuana legalization became more widespread on the state level, and it currently holds the largest share of the U.S. market for CBD as a result.

After several consecutive years of burgeoning revenue and earnings growth in the lead-up to its 2018 IPO, 2019 rolled around and hit Charlotte's Web hard: The company reported an earnings loss of $15.57 million despite bringing in $94.6 million in revenue. This started its stock price on a long decline that it has yet to recover from. 2020 wasn't much better, and the company hemorrhaged quarterly earnings losses for the first three quarters. Plus, revenue growth was slow or nearly flat compared to the prior year, caused in part by the reduction in retail traffic during the pandemic. 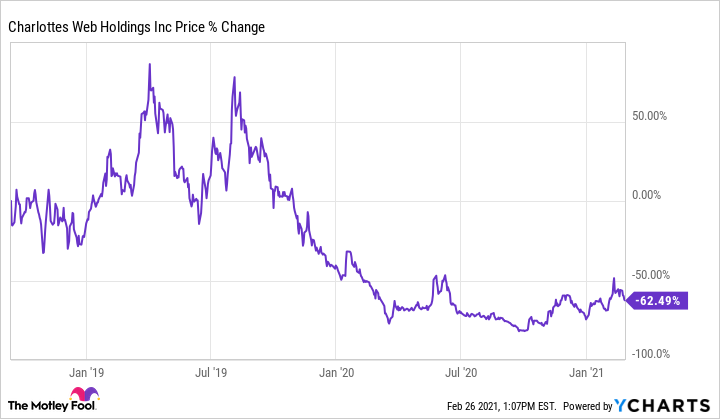 In a nutshell, it might be too late to buy this stock, because it hasn't been able to grow its earnings despite being around 33% larger than the No. 2 competitor in the market by revenue. If Charlotte's Web can't deliver for its investors when it's bringing in more money than any of its competitors, it doesn't bode well for the future.

Thankfully, it isn't all doom and gloom when it comes to the future of Charlotte's Web. In fact, it's entirely feasible that the company could pull off a rally over the next few years.

The market for CBD products is set to grow as large as $20 billion by 2024, and Charlotte's Web is positioning itself to capture this growth. Because CBD products are classified as nutritional supplements rather than psychoactive cannabis for recreational or medicinal purposes, they don't need to be sold at specialized dispensaries. So, CBD companies can sell their products to a mass market more readily than cannabis companies can, especially if they take cues from the consumer packaged goods (CPG) industry.

Consumer packaged goods are typically products like beer or basic cosmetics that are distributed widely and sold relatively cheaply. Demand for CPGs is high and steady, especially when consumers become loyal to a brand. And that's exactly what management has in mind for a revitalization of Charlotte's Web. While quarterly operating costs soared by 44% year over year in Q3 of 2020 -- thereby explaining some of the company's plummeting earnings -- it was for a constructive purpose: pivoting the business to become a CPG-style mass retailer. At the same time, the company onboarded 1,000 new retail locations carrying its products, reaching more than 22,000 in total. It's also improving its e-commerce and marketing capabilities to reach a larger and larger audience.

It's unclear for how much longer management plans on pushing the transition, which is a major factor in keeping operating costs high. Nonetheless, the company recently signed a distribution agreement with InterCure, an Israeli cannabis conglomerate, so it's safe to say that its plans to scale up are in full swing.

Keep an eye on Charlotte's Web

I'm cautiously optimistic about this stock, but I think it will prove prudent to wait for a while before investing. Even with its mass-market ambitions in progress, it could take a few quarters before Charlotte's Web returns to regularly reporting positive and growing earnings. After all, it hasn't had positive quarterly earnings since July 2019, and more losses could still be in the cards. So if you're bullish on the market for CBD, you should definitely keep an eye on the company's earnings reports to see how things are shaping up.

In the context of a rising tide and a transformational change in the business, investing right now could also mean getting your equity diluted in the short term by new stock issuance. But if Charlotte's Web can realize its goal to become the CPG power player in the U.S. CBD scene, it'll flourish, and its stock could become a winner as a result.