Please ensure Javascript is enabled for purposes of website accessibility
Log In Help Join The Motley Fool
Free Article Join Over 1 Million Premium Members And Get More In-Depth Stock Guidance and Research
By Chris Neiger - Mar 2, 2021 at 9:43AM

The company is about to begin manufacturing electric vehicles -- but investors should keep their expectations in check.

Luxury electric vehicle maker Lucid Motors has attracted a lot of interest from investors recently. The company recently announced plans to go public through a reverse merger with Churchill Capital Corp IV (CCIV), a special purpose acquisition company (SPAC). You can read a full breakdown of Lucid Motors stock over at Millennial Money, but I'm going to talk here about how many vehicles it plans to manufacture this year, and how long it could take to ramp up to full production. 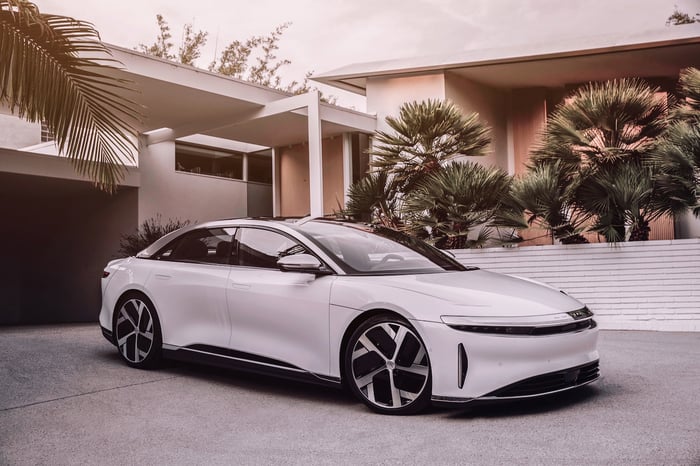 There's no shortcut for building cars

Lucid Motors finished the first phase of its 999,000-square-foot Casa Grande, Arizona, factory in December, and management says that it will start production of the fully electric Lucid Air by this spring. So how many of the vehicles will it make this year? About 7,000 at the most.

While the company says the Arizona facility already has the capacity to produce 30,000 vehicles per year, investors should remember that building cars, particularly during the early stages of production, is very difficult. Let's not forget that Tesla CEO Elon Musk described his company as being in "production hell" when it was in the early months of manufacturing its Model 3 in 2017 -- and that period occurred after Tesla had about 10 years of vehicle production experience under its belt.

If a company like Tesla suffered through ramp-up problems on a new model even after it had built several vehicles, you can bet that Lucid Motors will have some growing pains in the first year (or more) of production of its first model.

Lucid says that it will continue expanding its Arizona factory, increasing its square footage to 5.1 million by 2028, and will eventually reach an annual capacity of 365,000 vehicles. But that will take time. Keep in mind that Tesla just had its first year with 500,000 vehicle deliveries in 2020.

Lucid's execs have made several comments indicating that they plan to do things a little bit differently than Tesla, in ways they hope will allow them to avoid some of their competitors' mistakes. One aspect of that plan is their strategy of limiting Lucid's factory capacity to only what it needs right now.

Now, those are some bold words from a company that has yet to sell a single commercial vehicle yet, but it shows that Lucid really wants to get its vehicle production right. By intentionally starting with limited vehicle production in 2021 and not building a huge factory upfront, the company thinks it can be more efficient and avoid some pitfalls that tripped up Tesla as it raced to boost its output.

Over the next two years, Lucid will work on expanding its Arizona facility while also gearing up for its next vehicle, the Gravity SUV. When the next phase of the factory expansion is completed, Lucid says it will be able to produce 90,000 vehicles per year.

An electric vehicle company worth watching

While Lucid Motors is still at the beginning stages of manufacturing its first vehicle, investors will likely want to keep tabs on it. Electric vehicles are becoming increasingly important to both Wall Street and the automotive market. That will likely make Lucid Motors a hot commodity as the EV market expands in the coming years.