Please ensure Javascript is enabled for purposes of website accessibility
Log In Help Join The Motley Fool
Free Article Join Over 1 Million Premium Members And Get More In-Depth Stock Guidance and Research
By Rachel Warren - Mar 4, 2021 at 6:17AM

The sky is the limit for these growth giants.

There's no one approach to build wealth in the stock market. But the truth is that few investments will make you rich overnight -- for most, an overarching long-term investment philosophy is key. By building the core of your investment portfolio around a diverse array of fundamentally great stocks that have the profitable products or services needed to consistently produce meaningful growth and fuel investor returns, it's absolutely possible to generate serious wealth from stock investments over time.

If you have $10,000 to spend, here are two red-hot stocks that can bring you serious returns on that initial investment over the next few decades, making you richer in the process. 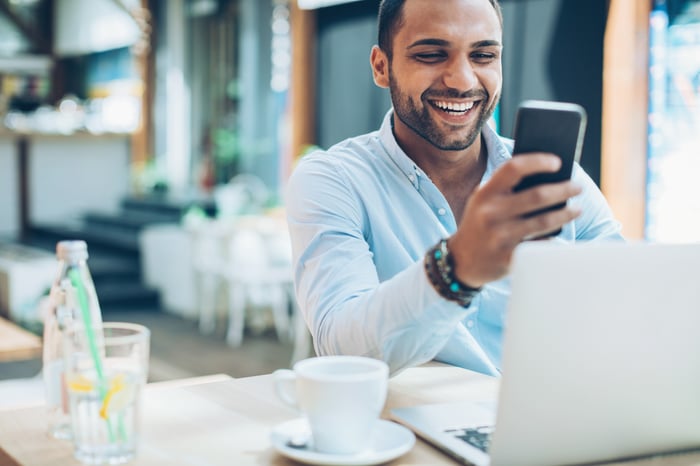 Social media stocks had a banner year in 2020, and Pinterest (PINS -3.45%) was at the top of the winners list. Over the past 12 months, the stock has gained 300% on the heels of increased investor attention and remarkable revenue growth.

Users are increasingly reliant on Pinterest's platform and services for everything from daily inspiration to delivering effective marketing initiatives. And in an age in which online advertising is king (and the average person spends anywhere from three to 12 hours scrolling their phone each day), companies like Pinterest are poised to cater to the needs of regular consumers as well as businesses looking to expand brand awareness using the innovative platform.

Pinterest's revenue surged 48% in 2020, while its global monthly active users spiked 37% year over year and average revenue per user rose 12%. Pinterest's adjusted EBITDA (earnings before interest, taxes, depreciation, and amortization) skyrocketed in 2020 -- up nearly 2,000% from 2019. Moreover, new users flocked in droves to Pinterest's platform last year, with management reporting that the company "welcomed over 100 million additional monthly active users" during the 12-month period. At the time of this writing, Pinterest has just shy of a half-billion users on its platform from every corner of the globe.

There's no doubt that extended lockdowns and stay-at-home orders brought a wealth of new consumers to try out Pinterest's platform, but these growth figures aren't solely a product of the pandemic. Pinterest's platform has supported a strong and consistent history of growth. For example, in 2019, Pinterest reported 51% revenue growth, while its global monthly active users and average revenue per user rose 26% and 21%, respectively.

Pinterest is projecting that first-quarter revenues will increase by at least 70% year over year, so it's clear that management is expecting to continue its monumental growth streak in 2021 as the world transitions to its new normal.

Analyst projections estimate that Pinterest's average annual earnings will increase by more than 240% per year over the next five years. As Pinterest continues to see meaningful earnings growth, it's also likely that the stock's price will continue to rise. Case in point, analysts think that shares of Pinterest could jump by as as much as 30% over the next 12 months alone. Investors aren't anywhere close to seeing the end of Pinterest's upside potential, and now looks like an excellent time to buy shares of this high-growth, high-reward tech stock.

Hydroponics retailer GrowGeneration (GRWG -4.79%) trades at just around $47 per share, but the stock is currently trading 776% higher than it was just one year ago. GrowGeneration has store locations across the U.S., including in California, Colorado, Nevada, and Washington -- all states that have embraced full marijuana legalization.

The company is also on the fast track to continue widening its footprint in both full and mixed legalization states and is snapping up new garden center locations right and left. In the month of February alone, GrowGeneration announced several notable acquisitions, bringing its total store count to 50. These included the acquisition of the four-store garden center chain San Diego Hydroponics & Organicsalong with a chain of four garden center locations in Oklahoma and Colorado. GrowGeneration also purchased a two-store garden center chain in Maine last month, another state where marijuana is 100% legal for both medical and recreational use.

GrowGeneration has also established an impressive track record of revenue growth. Looking back at its financial performance in 2017, 2018, and 2019 alone, the company reported respective year-over-year revenue increases of 80%, 102%, and 175%. 2020 was an equally exceptional year for GrowGeneration, during which it reported 140% revenue growth and 63% same-store sales growth. Considering that many top marijuana retailers have suffered tremendous losses during the pandemic due to lockdowns, the growth that the hydroponics company has achieved on all fronts throughout the past year further underlines the strength of its business and overall resilience when faced with tough market conditions.

As new states opt to legalize recreational pot, the opportunities for GrowGeneration to make new garden center acquisitions and achieve a deeper presence in core marijuana markets are virtually limitless. Investors should consider jumping on the bandwagon before this stock's price shoots even higher.

3 Best Unstoppable Stocks to Own in 2022