Please ensure Javascript is enabled for purposes of website accessibility
Log In Help Join The Motley Fool
Free Article Join Over 1 Million Premium Members And Get More In-Depth Stock Guidance and Research
By James Brumley - Mar 5, 2021 at 7:13AM

Investors would be wise to pay attention to this trend, which will aggravate cable companies while enriching smaller, niche streaming operators.

Thus far the streaming market has been dominated by early bloomers like Netflix (NFLX -5.04%) and media powerhouses like Walt Disney (DIS -0.71%). The former remains the market leader in terms of paying subscribers, while the latter's Disney+ boasts nearly 100 million customers just a little over a year since its launch. Not bad.

It's not Disney numbers, but it's respectable given the sort of content the company is working with, and it's downright huge considering Discovery+ as we know it only launched in early January. In fact, it's the fastest subscriber growth any streaming service has mustered in its first two months of existence except for Disney+, and Walt Disney was able to pre-promote its platform for months prior to launch. The draw of hit franchises like Star Wars and Marvel's Avengers clearly helped too.

Discovery's win isn't itself the big takeaway for investors keeping tabs on the streaming market, though. The important thing here is that this respectable interest in Discovery's lifestyle content shows that consumers are at least open to the idea of replacing traditional cable media services from players like Charter (CHTR -1.58%) or Comcast's (CMCSA -1.76%) Xfinity with a mix of la carte streaming options. 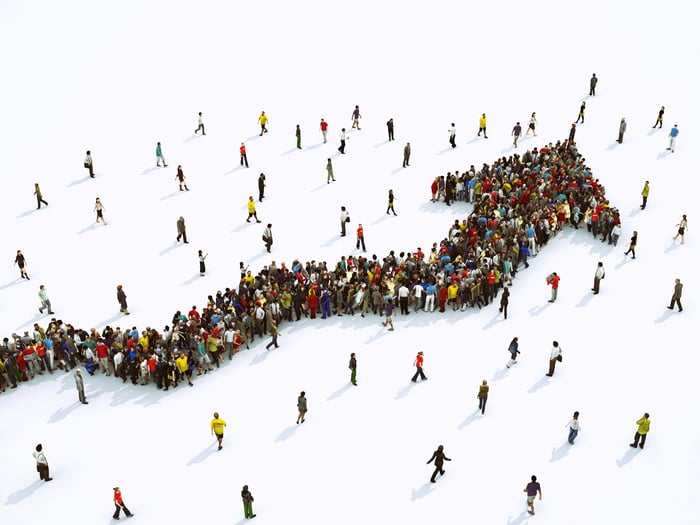 Some of Discovery's programming may ring a bell, but it's unlikely any one person will be familiar with all of the shows and movies available via Discovery+. Content ranges from HGTV's Fixer Upper to TLC's 90 Day Fiance to Magnolia's Super Dad to Discovery Channel's Monster Garage. The idea appears to be giving a lot of people a little of everything, even if none of it generates the sort of buzz surrounding must-see programming like Disney's The Mandalorian.

Nevertheless, Discovery's formula is working. The company is collecting between $4.99 (ad-supported) and $6.99 (ad-free) in subscription fees per month from around 12 million customers, mostly by leveraging content already available through traditional cable television providers.

It also has help. Verizon offers a year's worth of Discovery+ for free to its Unlimited wireless plan customers. Disney had early marketing help with Disney+ as well, but it also had much splashier content to work with.

The point is that at least some consumers are willing to pay for television's more mundane programming, presumably outside of regular cable service.

It's not just Discovery, either. AMC Networks (AMCX -0.82%) is now delivering digital video entertainment to more than 6 million paying customers. That's half of Discovery's headcount, although it's possible AMC's approach is crimping its potential -- whereas Discovery is aggregating all of its streaming content under one umbrella, AMC Networks manages several different streaming services, including AMC+, Sundance Now, Acorn TV, and Shudder. It's possible the relatively limited amount of programming available within each of those silos isn't quite enough to draw a meaningful crowd at a monthly price of between $7 and $9 per service.

The bulk of the bad news is for cable companies like the aforementioned Comcast and Charter.

While interest in offbeat streaming channels is palpable, it's not yet clear how many of these customers are necessarily cord-cutters or "cord-nevers". It's possible many of these people are still paying for cable service.

But that seems less likely for most. It's more plausible these consumers cancelled cable, and found a way to get certain programming without conventional cable service. If it's not happening en masse yet, the advent of Discovery+ and AMC's alternative certainly set the stage for such a switch. That's also somewhat bad news for Discovery and AMC, as the biggest chunk of their revenue still comes from/through cable service providers. Cord-cutting hurts their pricing power when it comes time to negotiate carriage fees.

There's good news all the same for Discovery, however, and perhaps more than most investors realize. The company drives much more per-subscriber revenue by selling its streaming service directly to consumers than it does by selling its programming through cable companies. Even in a relatively normal 2019, Discovery generated a top line of around $3.1 billion, but some back-of-the-envelope math suggests that translates into less than $1 per month per customer.

It's not quite there yet, but with just a little more streaming scale Discovery could drive a lot more revenue than it currently does, and say goodbye to cable providers altogether. It wouldn't even have to impose a price increase to do it. Again, at least a few million people are clearly already ok with the idea.

It's certainly a paradigm shift investors would be wise to watch.