Please ensure Javascript is enabled for purposes of website accessibility
Log In Help Join The Motley Fool
Free Article Join Over 1 Million Premium Members And Get More In-Depth Stock Guidance and Research
By Travis Hoium - Mar 5, 2021 at 8:40AM

A new company name may be in order.

It's official! Las Vegas Sands (LVS 0.60%) is selling its namesake resort in Las Vegas to Apollo Global Management (APO) and its affiliates for the staggering sum of $6.25 billion. The deal pulls in VICI Properties (VICI -1.16%), which will acquire the real estate, but it's notable because Las Vegas Sands is now exiting the U.S. market.

This follows months of rumors that the Las Vegas properties were up for sale and solidifies Las Vegas Sands' complete focus on Asia. After selling a property in Bethlehem, Pennsylvania, in 2019, the company won't have any U.S. operations left once the Apollo sale goes through. And that might be in the best interests of shareholders. 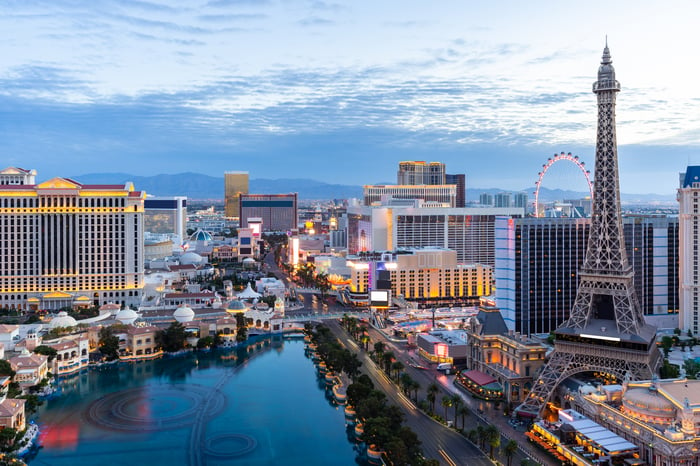 First, I think it's important to highlight just how big a $6.25 billion valuation is for the Las Vegas properties. In 2019, these operations generated $487 million in property EBITDA, a proxy for cash flow from a resort and casino. The purchase price of $6.25 billion implies a valuation-to-EBITDA multiple of 13, which is high for a sale, but broadly in line with what properties have been selling for.

The decision to sell its Las Vegas properties makes a lot of sense for Las Vegas Sands. The price was reasonable and its focus has transitioned almost entirely to Asia. In 2019, or before COVID-19, EBITDA from Macao properties came in at $3.2 billion and Marina Bay Sands in Singapore added another $1.7 billion. Compare that to the $487 million generated in Las Vegas and the properties there may not have been worth keeping.

Management is also seeing threats from the expansion of online gambling across the U.S., which could dampen spending on the Las Vegas Strip. It's no coincidence that management mentioned that as a place of potential investment in the future.

What I think makes little sense in this sale is the idea that Las Vegas Sands will actually be a major player in digital gambling. It has essentially no presence today and is years behind industry leaders like DraftKings, MGM Resorts, Penn National, and many others.

For Las Vegas Sands, it was the company's internal politics that kept it behind this growing market. Former CEO Sheldon Adelson despised the idea of online gambling and funded groups like the Coalition to Stop Internet Gambling, as well as politicians who supported his cause. After his passing in early January, the company looks like it's trying to do a 180, but it may be too late to become a big online player given it's starting from scratch today.

As an investment, Las Vegas Sands should be a cash flow machine. Macao and Singapore's casinos will likely open more fully later this year as COVID-19 vaccines roll out, and they'll generate billions in cash. But outside of those properties, there aren't many growth opportunities for Las Vegas Sands. The company abandoned plans to bid on a resort and casino in Japan, and it's not likely to be winner in online gambling.

I would expect this to be a strong dividend stock in the future, but it's not a growth stock, and that's a huge change from the last two decades of Las Vegas Sands dominating the most exciting growth markets in gambling.