Please ensure Javascript is enabled for purposes of website accessibility
Log In Help Join The Motley Fool
Free Article Join Over 1 Million Premium Members And Get More In-Depth Stock Guidance and Research
By Keith Noonan - Mar 6, 2021 at 8:54AM

The company is on track to hit a major milestone next month.

Shares of MicroVision (MVIS 6.80%) soared 109.3% in February, according to data from S&P Global Market Intelligence. The stock skyrocketed after the company announced an update on its upcoming technology for autonomous vehicles. 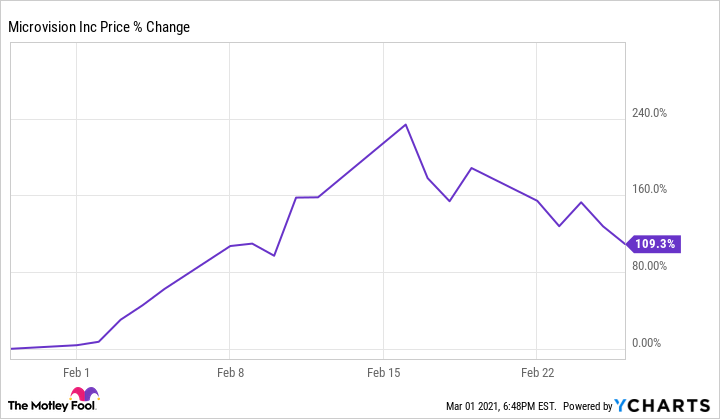 MicroVision makes light-detection-and-ranging (lidar) technologies, and it announced on Feb. 10 that it was making progress developing a new long-range update to its tech. The stock hit a 52-week high of $24.18 per share following the announcement, but it pulled back after the company announced a new stock offering and subsequent volatility for growth-dependent tech stocks. Despite the sell-off for tech stocks, MicroVision closed out February with explosive gains.

MicroVision expects to be able to show a working sample of its long-range lidar solutions by April. Following its announcement that it was on track to meet that target, the company announced on Feb. 22 that it had raised $48.7 million in funding through an at-the-market stock sale.

CEO Sumit Sharma stated that the sale had given the company the opportunity to shore up its balance sheet, pursue strategic alternatives, and deliver value for shareholders. In addition to lidar products, the company is also designing micro-display engine chips for augmented reality hardware.

Volatility for growth-dependent tech stocks has continued early in March's trading, and MicroVision has given up some of February's gains. The company's stock is down roughly 27% in the month so far. 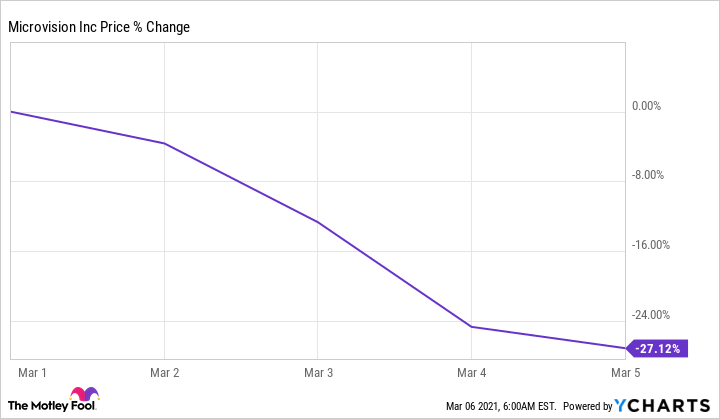 Even with the recent pullback, the stock is up roughly 138% year to date. MicroVision is still a small business with a growth-dependent valuation. The company has a market capitalization of roughly $2 billion, and it generated just $639,000 in sales last quarter.

Machine vision and augmented reality are exciting growth markets and are on track to be among this decade's most influential technology trends, but investors should proceed with the understanding that the stock is a high-risk, high-reward play.