Please ensure Javascript is enabled for purposes of website accessibility
Log In Help Join The Motley Fool
Free Article Join Over 1 Million Premium Members And Get More In-Depth Stock Guidance and Research
By Neil Patel - Updated Mar 7, 2021 at 9:56AM

Consumer favorites collide in this battle between coffee and burgers.

Spending $5 for a cup of coffee or eating cheeseburgers and fries -- I don't know which is more American.

Starbucks (SBUX 0.06%) paved the way for the masses to experience a premium coffeehouse experience, and today the company is valued at almost $125 billion. Shake Shack (SHAK -5.19%) started out as a single hot dog cart in New York City, and has since grown into a nearly $5 billion burger chain with 311 locations in 15 countries.

As these restaurant stocks turn the page on a disruptive 2020 and set their sights on the future, which is the better buy today? 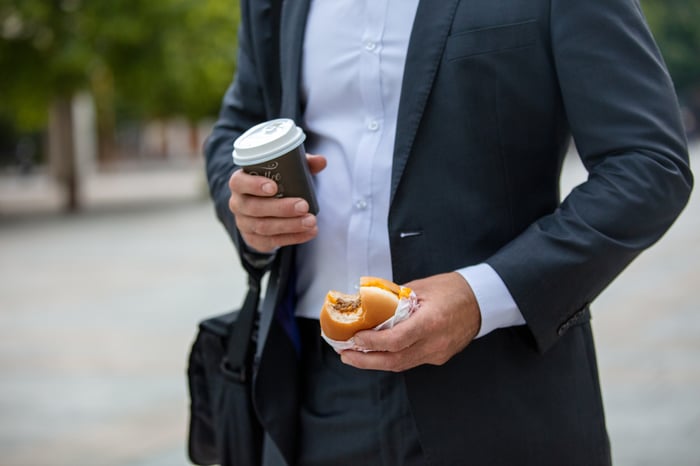 Starbucks' business is almost back to registering growth following a major hit from the coronavirus pandemic in 2020. In first quarter of fiscal 2021 (ended Dec. 27), global comparable-store sales (or comps) were down only 5% from the prior year, compared to a 40% decline two quarters earlier.

The company is planning for major growth in the decade ahead. Management believes that, by 2030, Starbucks can reach approximately 55,000 locations in 100 markets across the globe. With nearly 33,000 stores today, this is quite an ambitious target. However, it highlights just how strong the Starbucks brand is worldwide, while demonstrating the adaptability of the business to test different store formats.

It's also worth pointing out that at the end of the most recent quarter, there were 21.8 million Starbucks rewards members, which was a 15% increase from the year-ago period. The company recently made a change to its successful loyalty program by allowing customers to use multiple payment methods, as opposed to pre-loading money onto the company app. These members spend and visit more, something that will boost revenue over time.

Investors looking to acquire Starbucks shares will have to buy in at a forward P/E ratio of 34. I believe this is an attractive valuation for a truly outstanding company that still has a sizable growth runway left.

While Shake Shack's full-year 2020 revenue of $523 million was 12.1% less than the prior year, things are continuing to improve. Average weekly sales per store have trended upwards, and were $63,000 in the month of January, nearly double that of April 2020, when strict lockdowns were first put in place.

But Shake Shacks in some regions, particularly the New York City area, are still experiencing weakness as stringent stay-at-home orders are still in effect. There was also severe winter weather at the start of the year, discouraging consumers from venturing outside.

Despite a tough operating environment for restaurants, the company still added 36 new stores to its total footprint in 2020. And in the next two years, management is accelerating its development pipeline. Over the next two years, a combined 80 to 90 company-operated locations and 35 to 45 licensed locations (how the company expands internationally) are expected to be added. This means that by the end of 2022, there could be close to 445 Shake Shacks worldwide, a 43% expansion from today.

And like Starbucks, Shake Shack is leaning heavily on its digital capabilities. From the start of fiscal 2021 on Dec. 31 through the third week of February, sales via company-owned digital channels (mobile app, website, and delivery partners) are up an impressive 300% compared to the prior year. Additionally, Shake Shack plans to add more ways to serve hungry customers, such as contact-free pickup, walk-up windows, and drive-up locations.

And the winner is

After a rough 2020, Starbucks and Shake Shack are both registering improvements as the world moves past the economic and health crisis. Both continue to emphasize creating great food and beverage products with an exceptional customer experience.

But after Shake Shack's stock more than tripled since last March, I give the nod here to Starbucks. The burger joint can certainly continue its run, but its current valuation implies that each of its stores is worth greater than $15 million (compared to $4 million for Starbucks). This to me seems extravagant.

The coffeehouse empire has a longer track record, plenty of growth left, and still sells for what I believe to be an intriguing valuation.