This promising company has a lot of potential.

Bumble (BMBL 3.93%) went public on Feb. 11 in a highly anticipated initial public offering (IPO). The company has shaken up the online dating world with its namesake app, and it has a lot of potential to keep growing. Bumble's namesake app stands out from the field because it's tailored toward women, who send the first message and generally have a greater degree of control over interactions on the platform compared to other leading apps.

Amid recent volatility for technology stocks, Bumble at the time of this writing is trading roughly 13% below its opening price of $70 per share. Investors who build a long-term position could enjoy stellar returns, and it stands out as my favorite recent IPO. Here's why the company has what it takes to thrive through market volatility and deliver lots to love for long-term investors. 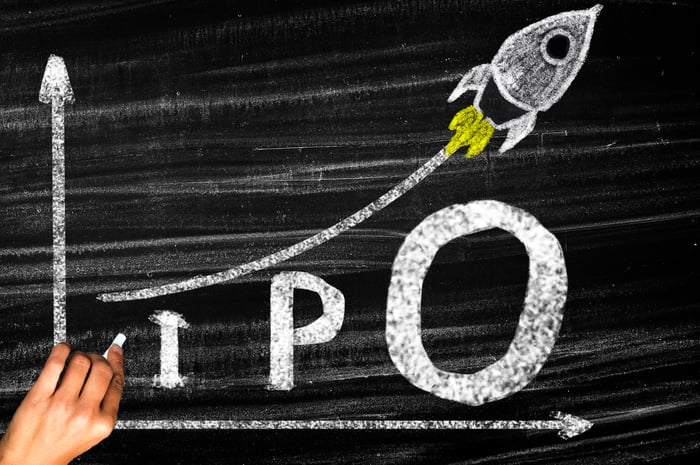 CEO Whitney Wolfe Herd founded Bumble in 2014 after having been a co-founder at Match Group's Tinder, bringing dating app experience and a new vision for how the market could evolve.

Bumble's namesake dating app is well differentiated, and its strong brand and highly engaged user base point to unfolding long-term growth opportunities. The service is currently the second-most-used dating app in the U.S., trailing Tinder, and it stands a good chance of gaining market share.

The company ended the third quarter with roughly 42 million monthly active users, and total paying users across its platforms rose 18.8% year over year to reach 2.4 million. That's still far behind the 10.9 million average quarterly subscribers that Match Group registered in its fourth quarter, but Bumble's core app has a large addressable market to grow into. The company also owns Badoo, a more traditional dating app, courtesy of its combination with MagicLab.

Bumble should have opportunities for growth as it attracts more users to its platform and increases revenue per user. The company has already built a strong brand in the U.S. and European markets, but it still has plenty of growth potential in other areas and as dating increases as the world emerges from the pandemic. Increased engagement should help the company boost advertising sales on the platform, and Bumble should have opportunities to drive in-app spending through the introduction of new features and machine learning applications that improve the user experience.

With more users joining its platforms, each user will have more potential opportunities to interact and form romantic connections. This creates a powerful network effect within a dating app, and Bumble should be able to leverage a broader network inside and between its apps. Tech improvements introduced for one service can later be tested, introduced, or modified on a sister platform, for example.

Bumble also looks like an attractive pandemic recovery stock. It managed to grow its active user base 10.9% year over year in the fourth quarter, according to tracking from analytics website AppTopia. As the world moves closer to a state of normalcy, dating apps will likely see a surge in activity, and Bumble should benefit.

Not for the faint of heart, but the payoff could be huge

Bumble is a growth-dependent stock. Even with recent sell-offs, investors are valuing the company with the expectation that it will be able to increase its sales at a healthy clip and swing back into profitability after a year of losses spurred by the coronavirus pandemic.

Charting the company's performance at this stage involves speculation even though the business currently looks very strong, and risk-averse investors will have to weigh how they feel about growth-dependent tech valuations in the face of market volatility. But some companies in the tech space should continue to justify high price-to-sales multiples.

Bumble's forward and trailing price-to-sales multiples actually look relatively appealing, and the business should be able to shift into consistent profitability after the pandemic headwinds dissipate. The company did $488.9 million in sales in 2019 and posted a profit of $86 million in the period, and the business should be able to return to profitability as it adds new paying members and eventually has room to ease up on marketing and technology platform spending.

The company recorded $376.6 million in sales across the first nine months of last year, and it saw engagement increase on a year-over-year basis according to AppTopia's tracking, so there's a good chance it will report sales above the $500 million mark for 2020. The company is scheduled to report results on March 10.

With a market capitalization of roughly $7 billion, trading at roughly 14 times 2020 sales wouldn't be discouraging in the context of the business's post-pandemic comeback potential.

Bumble managed to grow sales 36% and post a significant profit in its fiscal year before the pandemic hit. Growth will be slower in the near term, but momentum should pick back up as pressures from COVID-19 ease. Given the stock is still fresh off its recent IPO, investors should expect volatility in the near term, but the company has what it takes to be a big winner for long-term shareholders.