Please ensure Javascript is enabled for purposes of website accessibility
Log In Help Join The Motley Fool
Free Article Join Over 1 Million Premium Members And Get More In-Depth Stock Guidance and Research
By Jim Halley - Mar 9, 2021 at 7:36AM

These three stocks have plenty of momentum and solid financials, making them great long-term investments.

As we've seen this year, the market goes up and down, putting solid long-term stock picks at a premium over short-term gains.

The best bet is to look for stocks that are already dominating their sectors and have the wherewithal to increase earnings well into the future.

Trulieve (TCNNF -1.05%), Yum China Holdings (YUMC -0.10%), and Square (SQ -0.05%) all provide opportunities because they are well-known players in markets that should benefit from trends already in existence.

Trulieve is one of the few profitable cannabis stocks in an industry that inexorably will grow as more states open up to medical and adult-use sales. China set its GDP growth rate at 6% this year, with economists predicting that to be a conservative estimate, and Yum China's fast food sales are certainly a part of that growth. Square has already made its mark as a disrupter in fintech, and its revenue growth over the past five years appears to be speeding up rather than slowing. 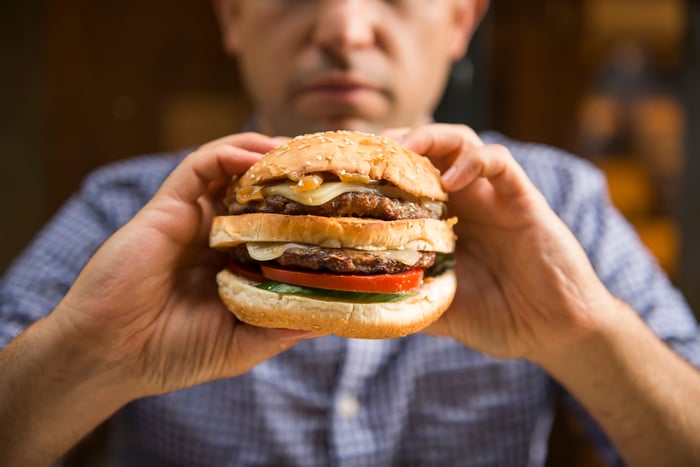 Trulieve shows the potential in cannabis

Everyone talks about the potential in cannabis stocks. Trulieve (TCNNF -1.05%) is already delivering on that potential. The stock is up more than 378% over the past 12 months. It's the largest cannabis company in Florida, garnering 50% of that state's market share in marijuana sales, and 73 of its 78 retail locations are in the Sunshine State.

Trulieve also operates in five other states: California, Massachusetts, Connecticut, Pennsylvania, and West Virginia. The company began showing a profit four years ago, and in the third quarter it had adjusted EBITDA of $67.5 million, the company's 11th consecutive quarter of growth and increased profitability.

Yum China Holdings is synonymous with growth. The company, a 2016 spinoff from U.S.-based Yum! Brands, began with one store in 1987 and is now the country's largest restaurant company with 10,506 restaurants across 1,500 cities in mainland China.

Shares in Yum China are up more than 40% over the past year. The company operates several well-known fast food brands in China, including Pizza Hut, Kentucky Fried Chicken, and Taco Bell. Dining out was a casualty of the pandemic nearly everywhere, but China is showing signs of rebounding more quickly than other nations in terms of opening up restaurants and other businesses.

The company also said that its operating profit increased to $180 million in the quarter, a gain of 90% year over year. Yum China is growing rapidly with 1,165 new stores last year, and plans to open up 1,000 more this year. 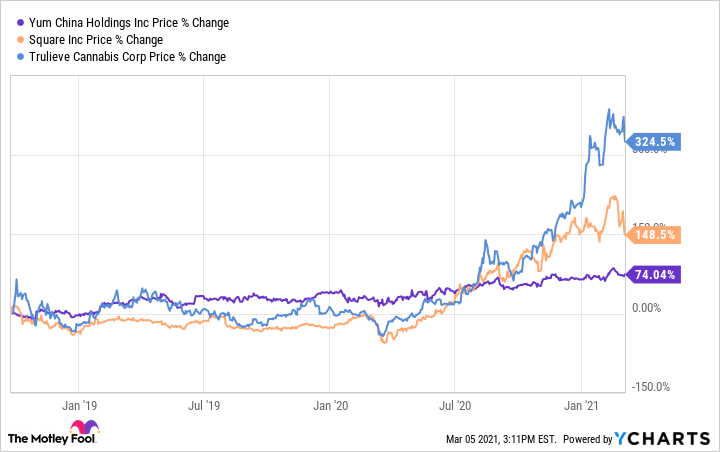 Square stock is a bankable opportunity

The company's services and subscription-based revenue, excluding its sale of Caviar, grew 74% in 2020, thanks in large part to the company's Cash App. In January alone, the company said it was used by 36 million people, a rise of 56% over the prior year.

Square did well during the pandemic, but I think it has also set itself up well post-pandemic, as many of its sellers who turned to the company for help with their e-commerce will continue those strategies to boost revenues even after things open up.

Earlier this week, Square said it was opening its own bank, Square Financial Services, which will provide small business loans. The company had already been providing business loans through its Square Capital division, but now will no longer have to partner with other lending institutions for those loans.

The company has also been smart with its Bitcoin purchases. It bought $170 million of Bitcoin in the fourth quarter and said the cryptocurrency now makes up 5% of the company's cash, securities, and cash equivalents. The company said that 48% of total consolidated net revenues in 2020, and 85% of
the total increase in consolidated net revenues in 2020, were due to Bitcoin's rise.

I see good long-term prospects for all three stocks.

Of the three, I like Square the best. Its shares have risen 208% over the last 12 months and show no signs of slowing down. The company has shown an ability to leverage its brand while branching out into other revenue streams with few missteps.

Yum China, while it doesn't have the profit margins of Square or Trulieve, may be the safest bet of the three to do well this year as more people in China return to fast food restaurants. Trulieve also has plenty of untapped prospects as it expands into other states besides Florida.

3 Stocks That'll Make You Richer in a Biden Bull Market

2 Stocks That Could Double Your Money