Please ensure Javascript is enabled for purposes of website accessibility
Log In Help Join The Motley Fool
Free Article Join Over 1 Million Premium Members And Get More In-Depth Stock Guidance and Research
By Rick Munarriz - Updated Mar 11, 2021 at 10:14AM

A fall grand opening makes sense for Disney, as that's the day it kicks off an 18-month celebration of the Disney World resort turning 50, but it will also be one more reason for visitors to hold off on a trip to the Florida resort. It will be a different story at Comcast's Islands of Adventure, SeaWorld Orlando, and SeaWorld-owned Busch Gardens. All three of those Central Florida attractions plan to debut major new roller-coaster attractions this summer or perhaps even earlier than that. They'd better make the most of the next few months. The Disney World hype machine is going to be pretty loud from late 2021 through early 2023. 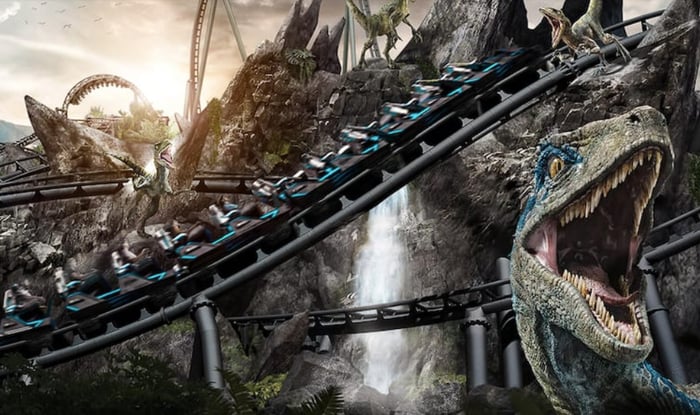 A summer of thrills

Velocicoaster, Ice Breaker, and Iron Gwazi may not be household names now outside of coaster enthusiast circles, but they will be the new stars of what will be an unpredictable summer season. Depending on how quickly the vaccination process plays out and how the COVID-19 case counts go, we could be seeing a very different summer travel season from last year, when everyone was bracing for a clinical theme park experience.

With most Florida theme parks capping daily attendance at 35% of their capacity, things can start to get really interesting if the tourism market springs back to life this summer and restrictions start to ease up. Disney's gamble -- opening a new ride to mark a milestone rather than serve the summer travel market -- could backfire if visitors do flock to Florida with their pent-up demand, stimulus checks, and pandemic savings over the summer. The recession may blow over while Disney World is still trying to place 50 candles on a birthday cake.

Disney will still make out nicely in the scenario where Florida becomes a hotbed of summer travel for the first time since 2019, but it will really be Comcast and SeaWorld Entertainment that are positioned to see dramatic improvement in their turnstile clicks. To be fair, Remy's Ratatouille Adventure may very well be available to theme park visitors before October. New attractions often go through "soft open" periods before inviting media and patrons over for a grand opening. However, outside of locals, you're probably going to see a lot of families just push out a summer trip to Disney World until some point in the 18-month celebration rather than go now and miss out on everything that's coming during the 50th anniversary of the world's most visited theme park resort.

Disneyland in California -- now expected to open in late April, but at a mere 15% of capacity -- may get more traction as a tourist draw than Disney World just for the novelty of its finally reopening after what will have been a 13-month closure. Disney World had to suffer only four months of downtime last year.

This is the opportunity that Comcast and SeaWorld need to stand out this summer, and after both stocks hit fresh highs this week, the expectations are already getting heady. The coasters are coming to Central Florida, and they have several months' lead on the big mouse that's chasing the competition this year instead of the other way around.