The returns have been stellar, but how much risk are investors taking on with these stocks right now?

The world's largest cryptocurrency, Bitcoin (BTC -3.65%), just keeps getting bigger. Over the past 24 hours, its price has risen about 2% and is approaching $58,000 per Bitcoin. This puts Bitcoin's market capitalization at about $1.07 trillion, according to CoinDesk.

Today, U.S. President Joe Biden signed the latest economic stimulus package, sparking a big rally on Wall Street. These two factors -- the price of Bitcoin and the stimulus -- caused cryptocurrency stocks to skyrocket. Cryptocurrency miners like The9 Limited and Riot Blockchain were up 17% and 12%, respectively. And mining-equipment manufacturer Canaan was up a whopping 30% for the session.

Canaan, Riot Blockchain, and The9 are diverse businesses. Nevertheless, these tend to trade in tandem based on the direction of cryptocurrencies. And cryptocurrencies tend to trade in the same direction as Bitcoin. On one hand, this makes sense. Riot Blockchain mines Bitcoin. To generate revenue, it periodically sells what it's mined. When prices go up, it's a good time for the company to sell, because it allows for greater revenue.

On the other hand, not all of these moves make total sense. For example, Canaan manufactures equipment used for mining Bitcoin. As the price rises, more and more companies are enticed to mine. For proof, consider the total hash rate of the Bitcoin blockchain network. The hash rate measures the total computing power of the network. According to Blockchain.com, the total hash rate is up roughly 34% year over year.

Simply put, there's 34% more machine power mining Bitcoin than at this moment last year. Of course, last year at this time, the price of Bitcoin was about $6,000. It's gone up almost 10 times since then, and mining companies are scrambling to grab their piece of this increasingly valuable pie.

In a gold rush, it's a great time to be selling shovels. And Canaan sells Bitcoin shovels. However, the company already announced it's running at capacity for the remainder of the year and possibly into next year. That's great for business. But as the price of Bitcoin keeps rising, that doesn't mean there's more demand for Canaan's products -- its demand has already maxed out.

Nevertheless, Canaan, Riot Blockchain, and The9 stocks are all favorites among traders. As long as that's the case, they'll likely see outsize moves on days like today, as traders buy the news. 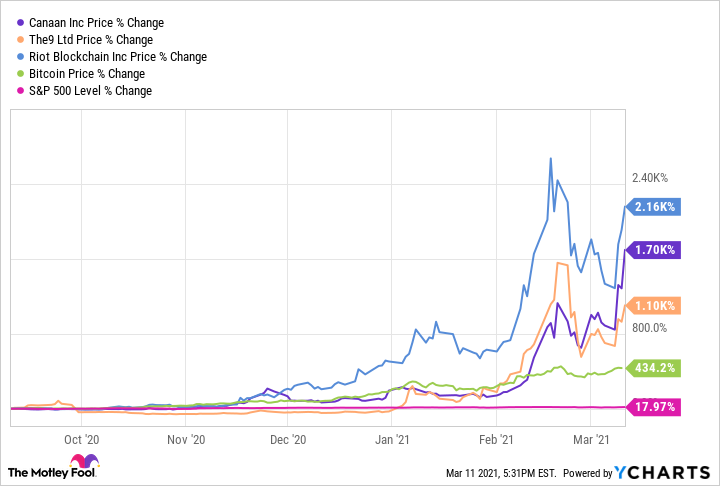 Chart shows six-month returns for Canaan, Riot Blockchain, The9, Bitcoin, and the S&P 500. CAN data by YCharts

In my opinion, all of these stocks remain risky investments. That doesn't mean they can't go up further. In fact, they've already risen far more than what I thought possible, so congrats to long-term shareholders. However, I would think that these stocks would eventually come back in line with business fundamentals. Consider these three stocks from a price-to-sales (P/S) ratio perspective:

Canaan's P/S ratio will probably improve in 2021, since its sales will likely be strong. We can't project the price the company will get per machine, but it's fair to say its overall revenue will increase. Still, 45 times trailing sales is a hefty price tag for a lower-margin hardware business, even if this year is booming.

With The9, the most recent financial update on its website is from 2019, so it's unclear what it's financial picture is right now. However, it only had revenue of $49,000 (thousand, not million) back then. That's a P/S ratio of over 12,000 given its current market cap of $627 million. However, the company plans to start announcing financial results again on March 30, so we may see a very different picture.

There's nothing wrong with having riskier investments in your portfolio. In fact, I hold stocks that I consider risky. However, just remember that you don't have to invest exclusively in high-risk companies. Many of the safest stocks on the market have also delivered some of the best returns over the past decade. The trick is learning to hold for the long term.