Borrowing costs for solar companies aren't rising as fast as some investors feared.

Shares of solar energy stocks had a big day again on Thursday as the entire industry shot higher. A rising stock market and investors piling back into clean energy stocks overall has certainly helped. But there is some positive news about the industry's finances as well. The best news of the day is that Sunrun announced the pricing of securitization of residential solar and battery systems. The $201 million offering was priced at a yield of 2.46% and is 172 basis points lower than the company's average cost of senior securitized notes.

Over the last month, solar stocks have dropped because investors were worried about borrowing costs going up. You can see below that the 10-Year Treasury rate has risen sharply, which corresponded with solar stocks falling off a cliff. That's because solar projects are often financed by debt, so if debt yields go up, the value of projects goes down. 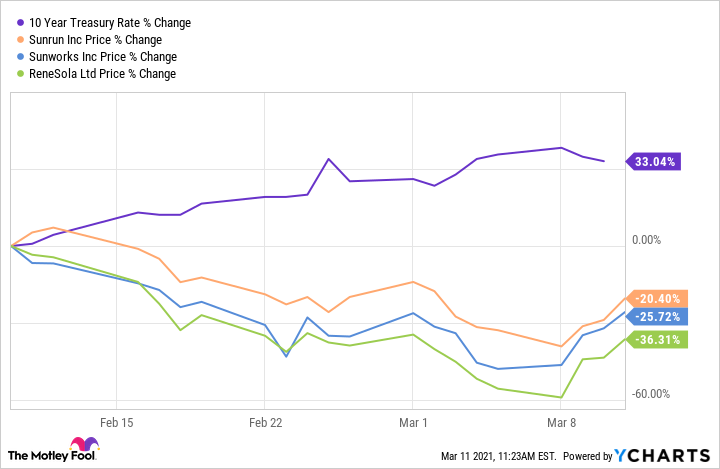 Sunrun showing that the cost of debt is still extremely low is good news for the value of the projects all of these companies are working on.

Ironically, the move higher is happening on a day when yields are rising slightly. But that doesn't seem to be a concern of the market today, and the fear of rising rates may be subsiding.

Another potential help for solar stocks is Senate Democrats reintroducing the Clean Energy for America Act that was derailed two years ago. The bill could make tax policies for renewable energy sources more permanent, unlike the stop-and-start tax credits currently seen in the solar industry. Details are still emerging as the bill is written, but the fact that it's on the table has to be seen as good news for investors.

Solar energy stocks have been extremely volatile over the past six months, and this is another example of that. While most of today's move is likely driven by a climbing stock market, there was some good news as well.

Low borrowing costs for solar developers and finance companies will be a boon for everyone in the value chain. Today that's helping Sunrun, Sunworks, ReneSola, and SunPower, and if costs stay low, these stocks still have room to run.