Please ensure Javascript is enabled for purposes of website accessibility
Log In Help Join The Motley Fool
Free Article Join Over 1 Million Premium Members And Get More In-Depth Stock Guidance and Research
By Manali Bhade - Mar 12, 2021 at 6:40AM

These stocks can keep your portfolio afloat in any market condition.

Recent weeks have been pretty wild for many high-flying U.S. growth stocks. The Nasdaq Composite lost 4.5% of its value and won it all back (and some) in the past month. While the drop unnerved some retail investors, it has also opened up opportunities to scoop up fundamentally strong growth stocks at lower prices.

MercadoLibre (MELI 5.97%), Sea Limited (SE 14.05%), and Jushi Holdings (JUSHF 2.36%) are all well-managed companies that stand to benefit from long-term structural trends despite general volatility. Let's see how each has proven itself as a promising pick, no matter the state of the stock market. 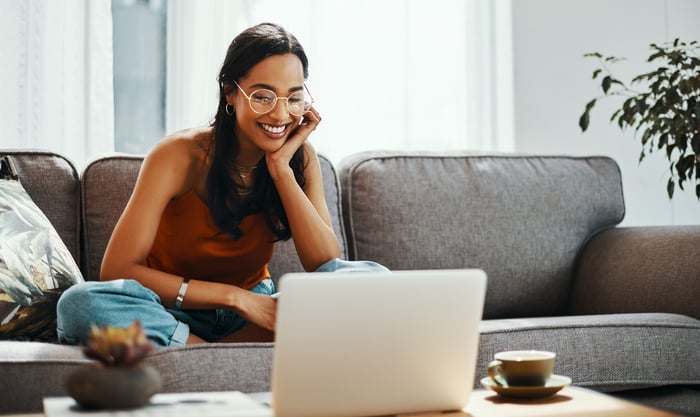 A top-notch e-commerce and online payments player in Latin America, MercadoLibre has seen explosive growth since it went public in 2007. What started as a Latin American online marketplace was soon bolstered by the launch of a payments business, Mercado Pago. The company has developed a broad ecosystem of e-commerce and financial services and established itself as a brand to be reckoned with in the Latin American market.

MercadoLibre's revenue rose 149% (currency neutral) year over year to $1.3 billion in the fourth quarter. This was driven by triple-digit year-over-year growth in gross merchandise value for the MercadoLibre marketplace and total payment volume for Mercado Pago. The company will most likely continue to post solid top-line growth in future quarters, since the level of online buying and percentage of unbanked or underbanked people in South America is yet to catch up to those of many other continents.

Unique buyers on MercadoLibre's marketplace were 37 million in the fourth quarter and crossed 60 million for fiscal 2020. The huge customer base has created a strong network effect, which in turn acts as a wide moat. MercadoLibre Pago is now used on the marketplace as well as in a range of everyday transactions such as utility payments as well as peer-to-peer and mobile point-of-service transactions. Because most of these off-platform transactions are sticky in nature, Mercado Pago has emerged as a bigger growth driver than the marketplace.

Despite the stock being down 6% so far this year (mainly due to an unexpected loss in the fourth quarter), today MercadoLibre trades at a 12-month trailing price-to-sales (P/S) multiple close to 20. This is quite expensive considering that the global online e-commerce leader Amazon (AMZN 4.11%) and dominant fintech stock PayPal Holdings (PYPL 2.70%) trade at P/S multiples of 4 and 14 , respectively. However, considering MercadoLibre's standing in the rapidly expanding Latin American e-commerce and cashless payments market, I think that this company can soar much higher in 2021.

Based in Singapore, Sea Limited is a leading digital gaming, mobile e-commerce, and digital payments player in Southeast Asia and Taiwan. The pandemic accelerated demand for all of Sea's offerings, as lockdowns and social distancing forced people to perform most of their everyday activities online.

Sea's stellar fourth-quarter performance seems to reflect this new normal. Revenue jumped 102% year over year to $1.6 billion, while adjusted earnings before interest, tax, depreciation, and amortization (EBITDA) was $48.7 million, a dramatic improvement from a loss of $104.9 million in the quarter a year ago.

The majority of e-commerce and fintech companies invest aggressively to capture market share and build scale in the first few years -- and Sea is no different. However, its gaming business, Garena, has helped keep overall losses under control.

Garena has managed to do this thanks to the phenomenal success of its multiplayer battle royale game, Free Fire, ranked as the most downloaded mobile game in the world in fiscal year 2020. Paying users for Free Fire grew by 120% year over year to 73.1 million in the fourth quarter.

Sea's Shopee recently surpassed Alibaba's Lazada to become the dominant e-commerce platform in Southeast Asia, and is vastly benefiting from economies of scale and network effects. Finally, although the digital finance platform SeaMonkey is currently a small part of the business, it is being rapidly adopted both by the Shopee user base as well as third-party merchants.

Sea now expects Garena's bookings and Shopee revenue to grow year over year by 38% and 112%, respectively, at the midpoint of guidance in fiscal 2021. These are impressive projections, and should be expected of a company trading at a rich trailing 12-month P/S multiple of 25.

Sea may seem to be a pricey stock. However, Southeast Asia's internet economy is expected to be worth $300 billion by 2025. With Sea raking in revenue of only $4.4 billion in fiscal 2020, this dominant market player has just scratched the surface of a huge addressable market. I think that the explosive growth potential of Sea makes it a promising pick, even at an elevated price.

A relatively new player in the U.S. cannabis market, Jushi Holdings focuses on offering high-quality cannabis products including flowers, edibles, and concentrates. A favorite of millennials and a frequent name on Robinhood's top 100 stocks list, this small-cap multistate operator has three cannabis cultivation centers, four manufacturing facilities, and 30 retail stores across seven states. The company also plans to open 10 to 12 additional stores across the country in 2021.

While the numbers may not seem enticing, it is Jushi's exclusive focus on limited-license markets such as Pennsylvania, Virginia, Illinois, Ohio, Nevada, and California that has helped keep away competition. The company considers Pennsylvania, Virginia, and Illinois as its core focus markets while Ohio, Nevada, and California are categorized as developing markets to fuel future growth.

Pennsylvania's medical marijuana market is estimated to be worth over $1 billion by 2024. The state is also moving toward legalizing recreational marijuana, which could be game-changing for Jushi. The company already operates 10 dispensaries in the state and plans to open an additional eight in 2021. Jushi also operates four dispensaries in Illinois, a state that commenced recreational marijuana sales on Jan. 1, 2020. Currently, Illinois is the second-largest market for the company.

Finally, Virginia has offered only five vertically integrated licenses to cannabis players, and Jushi is one of them. In the case of recreational cannabis legalization in the state, Virginia may rake in sales worth $698 million to $1.2 billion annually. Huge market potential coupled with limited competition makes Virginia an attractive growth opportunity for Jushi.

The success of this targeted market strategy is already evident from the company's stellar growth rates. Jushi has guided for a 365% year-over-year increase in revenue to $40 million for the first quarter of fiscal 2021, ending March 2021. The company also expects revenue to be in the range of $205 million to $255 million and adjusted EBITDA of $40 million to $50 million in fiscal 2021. Jushi also sports a strong balance sheet, with total cash worth $180 million and total debt at $86 million.

Despite the many positives, Jushi is trading at a trailing 12-month P/S multiple of 12, which is below most of its competitors. Taken all together, the expansion progress and future state of marijuana in the U.S. would make your possible "buy" thesis on Jushi clear. This is one cannabis company that you will not want to miss out on in 2021.