Please ensure Javascript is enabled for purposes of website accessibility
Log In Help Join The Motley Fool
Free Article Join Over 1 Million Premium Members And Get More In-Depth Stock Guidance and Research
By Maurie Backman - Mar 13, 2021 at 6:49AM

Want to score an even higher payday? One simple move could be your ticket to a much larger windfall.

On March 11, President Biden signed a sweeping $1.9 trillion coronavirus relief bill into law. That bill includes provisions like boosted unemployment, an expanded child tax credit, and perhaps most notably, a round of $1,400 stimulus checks.

This stimulus round is the most generous one to date. The first round, which the CARES Act provided for, was worth $1,200. The second round, however, came in at just $600.

Best of all, the White House recently announced that stimulus checks could start hitting Americans' bank accounts this weekend. That timeframe applies to those who are eligible to receive those payments via direct deposit. Those waiting on paper checks may need to sit tight until April. 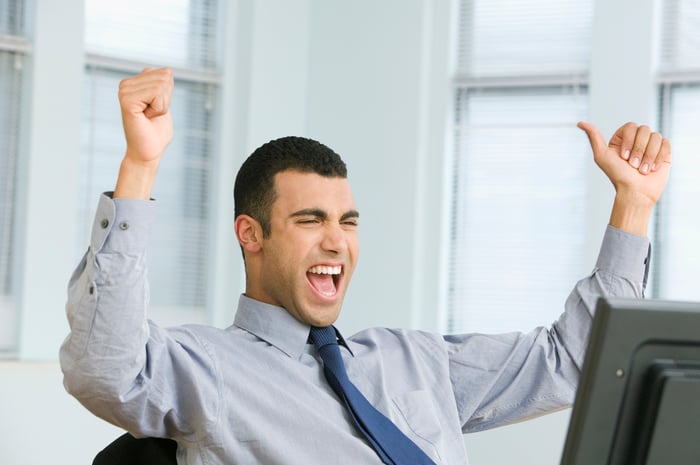 If you're anticipating a $1,400 windfall, you may already be making plans for that money. But if you don't need your stimulus to cover essential bills or dig out of debt, it pays to put that money to work. In fact, if you play your cards right, you could easily triple your stimulus check with minimal effort.

A higher payday could be yours

Investing your stimulus check is a great way to score a much higher windfall. And the good news is that you don't need to be an investing guru to pull that off. All you need to do is rely on a single index that's performed notably well over the past three decades -- the S&P 500.

The S&P 500 consists of the 500 largest publicly traded companies, and you can invest in it in a few different ways. You could buy shares of each company in it, though that's a cumbersome undertaking. Or, you can buy exchange-traded funds, or ETFs, that track the S&P 500 and whose performance is tied directly to its performance. The latter is clearly the easier option of the two.

Of course, you don't have to buy S&P 500 ETFs to score an average yearly 12% return on your investments. If you're a whiz at hand-picking stocks, you could buy shares of a few companies you think will provide that same level of growth. But if you want to triple your stimulus payment with pretty much no effort, then S&P 500 ETFs are a good way to go. That way, you're effectively investing in 500 different companies with a single transaction.

There are a number of different S&P 500 ETFs you can choose from, but as a starting point, look at the Vanguard S&P 500 ETF (VOO -0.67%). It charges super low fees (known as expense ratios) that won't eat into your returns in a meaningful way, which will allow you to not only grow your wealth, but keep more of that wealth for yourself.

New to the Stock Market? Here's the Easiest Way to Start Investing