It's not getting much attention lately, but the future for Amgen looks strong.

It's been a busy few weeks for the healthcare industry, with Pfizer and BioNTech, Moderna, and Johnson & Johnson hard at work manufacturing and distributing their versions of the COVID vaccine all over the country.

There's one big name, however, that's been out of the headlines. It's true that Amgen (AMGN 0.02%) has helped from the sidelines, signing partnerships with companies like Eli Lilly to manufacture COVID-19 therapeutics. It just seems that investors are flocking to companies putting a lot more resources toward combating the pandemic (note Johnson & Johnson's recent new high of $170).

However, this is not a time to count out Amgen. The company has been busy bolstering its pipeline of new drugs and adding to its biosimilars. In 2020 alone, revenue was up 9%, and more growth is on the horizon. Overall, the future for this company looks strong -- here's why it's worth considering buying this stock now. 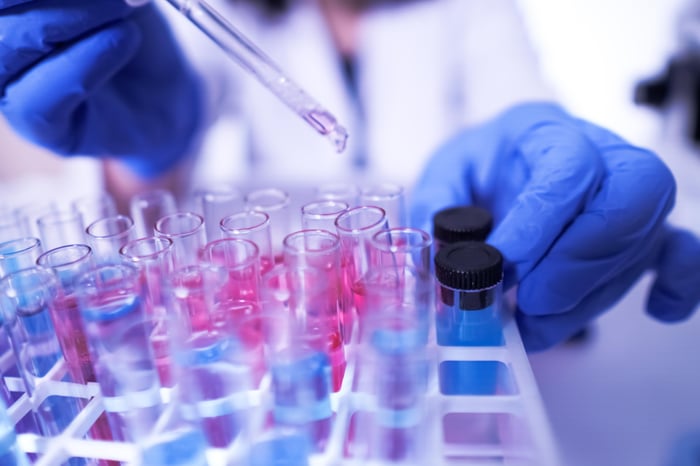 The emergence of biotech

One of the world's biggest biotechnology companies, Amgen has established itself as a pioneer in the space, proving within a few years of its founding in 1980 to be a disruptor of the industry with its first breakthrough drug, Epogen.

The world of biotech -- which involves creating medicine from living organisms -- was relatively limited in 1980, but over just the past few decades, we've seen a shift in which new drugs are commercially successful. Where once these belonged to legacy pharmaceutical companies, now the momentum is with up-and-coming biotechs. The space has been hot over the past few years, with companies including Amgen, AbbVie, and Celgene (now part of Bristol-Myers) establishing themselves with blockbuster drugs including Humira (AbbVie's treatment for Crohn's disease and other indications), Revlimid (Celgene's medication for myeloma), and Otezla (Amgen's drug for psoriatic arthritis).

In 2019, one survey found that 64% of the drugs approved by the FDA in 2018 were made by biotech companies. Looking to the future, biotech will play an important role in the development of breakthrough treatments for rare and complex diseases, in contrast to the smaller improvements we tend to see from traditional pharmaceutical companies.

A solid pipeline and quality products

Amgen's first blockbuster drug, Epogen, was introduced in 1989 and has been a bestseller ever since.  This drug is used in certain cases of anemia to stimulate a patient's bone marrow to create more red blood cells. It was followed by Neupogen, which stimulates the growth of white blood cells. While sales of Neupogen have fallen off considerably since 2015 because of biosimilar competition, these drugs made Amgen a household name -- and the success didn't stop there.

Looking at the present day, Amgen boasts a fantastic lineup of drugs. Some bestsellers include Enbrel (for severe arthritis), Prolia (for osteoporosis), somewhat recent newcomer Repatha (for high cholesterol), and the new shining star, Otezla. Amgen seems to be doubling down on Otezla, a drug acquired from Celgene in August 2019. Sales of the treatment were up in 2019 by 25% to $1.6 billion. In 2020, the drug did $2.2 billion in sales, representing a 36.5% increase. Amgen expects Otezla to grow sales by more than 10% per year over the next few years, and management in general hopes to dominate the immunology space with new drugs in the pipeline, as well as focusing on creating biosimilars. All that is easy to understand given its current growth rate.

The company has also reported advancements in its pipeline, including positive data from several potential medications that will enable registrations. The company has completed regulatory submissions for sotorasib, a medication treating lung cancer, in most geographies, with phase 2 studies planned for the first half of 2021. With a robust pipeline and good news regarding research and development, Amgen is focused on the now and the future.

Great growth in the past, and more to come

Vaccine makers aside, many healthcare companies are currently going through a period of stagnation and very little growth. Amgen, however, has been a standout, growing earnings at an average of 11.7% per year over the past 10 years. The company has beaten the big pharma names and been a star in its own peer group. For full-year 2020, Amgen posted 9% revenue growth and 12% non-GAAP earnings per share. As we all know, past performance is not indicative of future results -- but that kind of resilience in its business, shown during one of the worst recessions on record, demonstrates the wideness of Amgen's moat and the competence of its board. In 2020, the company also managed to expand into new markets including China and Japan.

Existing drugs such as Enbrel are Amgen's top sellers by revenue (Enbrel brought in almost $5 billion in 2020 alone). But newcomers aren't slacking, with Otezla delivering 30%-plus prescription growth in 2020. Throw in the company's 3% dividend yield -- which was last raised by 10% three months back -- and Amgen looks like a great buy that healthcare investors will likely want to hold for a long time.