Please ensure Javascript is enabled for purposes of website accessibility
Log In Help Join The Motley Fool
Free Article Join Over 1 Million Premium Members And Get More In-Depth Stock Guidance and Research
By Nicholas Rossolillo - Mar 14, 2021 at 7:22AM

This mobile 5G industry leader looks like a buy after the recent tech stock sell-off.

Share prices for connectivity chip design leader Skyworks Solutions (SWKS -1.22%) are up a market-beating 44% over the last year. The initial rollout of 5G mobile networks -- and the subsequent purchase of 5G-enabled smartphones to take advantage of the latest generation of wireless service -- have boosted the company's results. This is in spite of lingering after-effects of the U.S.-China trade war as well as lower smartphone sales last year during the pandemic.

It's been an epic run for Skyworks, but a recent sell-off in the stock (along with other tech stocks in recent weeks) could spell an opportunity for the right type of shareholder. 5G captures a lot of headlines, and for good reason. A lot of behind-the-scenes network equipment will need to be deployed to cover the world in 5G signal, and billions of smartphones will be sold so consumers can make use of the faster and lower-latency network. As some 80% of Skyworks' revenue is tied to the mobile phone end-market (about half of the total directly tied to Apple (AAPL 3.67%)), it stands to gain a lot from this massive undertaking.

But Skyworks isn't just a play on 5G. Its "broad market" segment hauled in revenue of $326 million in the last reported quarter (just over 20% of total sales) -- representing a 35% year-over-year increase.

Within this division are devices making use of new technologies like video conferencing, safety systems on autos, connected industrial equipment, and touchless payments in commerce. Some of these devices are making use of 5G just like smartphones are, but others rely on WiFi, GPS, and Bluetooth. Skyworks has chips to address all of the above.

5G will command the spotlight for some time, but WiFi 6 (the latest generation of WiFi connectivity tech) is also undergoing a rollout. Businesses, in particular, are upgrading their equipment, and consumers are starting to as well. Though it's the smaller of the two segments and not growing as fast as mobile (which was up 80% year over year in the last quarter), WiFi should be a key catalyst for Skyworks' "broad market" portfolio of connectivity semiconductors.

All told, Skyworks had a great outing in the first quarter of its 2021 fiscal year, putting it back on a path to full-year growth after a long drought that started in 2018. 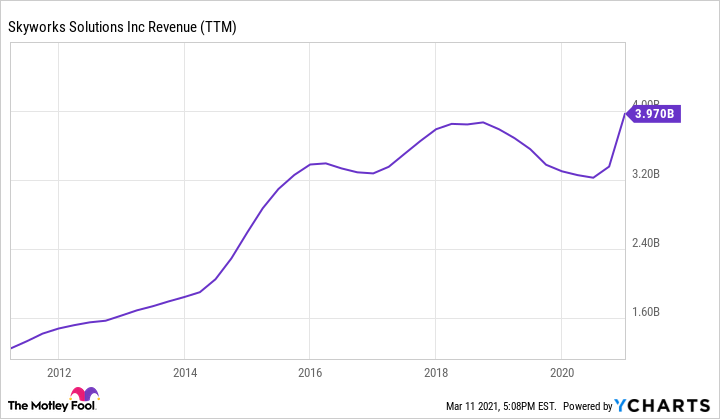 Specifically, Q1 revenue and free cash flow increased a respective 69% and 28% to $1.51 billion and $366 million. And as for outlook, management said to expect revenue and adjusted earnings per share to increase 50% and 75%, respectively, in the second quarter.

Not all is perfect, though. Skyworks' rapid rise is being inflated by the first wave of 5G smartphone purchases. As the semiconductor industry is cyclical, these results could moderate substantially later this year or next. Nevertheless, shares look like an attractive 33 times trailing 12-month free cash flow given how quickly the bottom line is expected to expand this year. But as share prices can be volatile, ease in with a small initial purchase (perhaps 1% or less of your portfolio's total value) and be ready to buy the inevitable dips.

Skyworks will provide some cushion along the way, too. At the end of 2020, the company had $1.02 billion in cash and equivalents and no debt on balance. It uses its strong balance sheet and highly profitable operation to repurchase stock.

A new share repurchase program for up to $2 billion worth in shares (7.5% of Skyworks' current enterprise value) was announced concurrent with the last quarter. The company also pays a dividend yielding 1.2% a year. In tandem, it's a pretty decent shareholder return to complement this growing business.

Expect Skyworks to be a volatile stock in the years ahead, but one that will ultimately grow over time. If you have at least a few years to wait and let the company's story play out, I think it's a solid buy right now.