Please ensure Javascript is enabled for purposes of website accessibility
Log In Help Join The Motley Fool
Free Article Join Over 1 Million Premium Members And Get More In-Depth Stock Guidance and Research
By Jason Hawthorne - Mar 17, 2021 at 10:11AM

The electric vehicle maker may represent the future of transportation, but a couple of factors are holding me back.

Never is a long time. Saying you'll never own something is a bold statement and probably requires a caveat. So here goes. I'll probably never own Tesla (TSLA 7.90%) stock and there are two reasons why.

Before I list them, I should also tell you that selling shares of Tesla was the worst investment decision I've ever made. Those 100 shares I bought (and sold) in 2012 would be more than a 100-bagger if I had held on. Still, despite several compelling reasons to own it, you're unlikely to find the stock in my portfolio.

The first reason has to do with how markets work. No product gets to take over a global market unchallenged. That's especially true for an industry where it can take two to five years to get a new product from concept to the customer. Add in annual capital expenditures of as much as 10% of revenue and you can understand why innovation in the auto industry tends to be slow and very incremental. 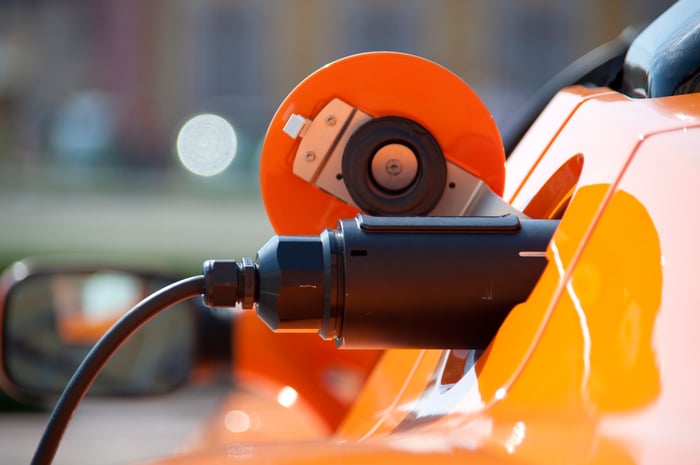 Electric vehicles (EV) are rapidly taking a share of the overall auto market, though. The 2.6% market share for EVs last year set a record, and it leaves plenty of room for continued growth. When California's Gov. Gavin Newsom signed an executive order setting a target date for banning the sale of internal combustion engines in the state, he added California to a list of governments including France, Spain, Canada, and India all doing the same.

The legacy auto industry is taking the hint. In fact, the market for EVs is beginning to look a lot like the traditional automotive industry. The competition includes General Motors, which committed to introducing 30 new EV models by 2025, and Volkswagen-owned Porsche's $250,000 616-horsepower Taycan, as well as upstarts like Chinese EV company NIO, American-made Fisker, and Amazon-backed Rivian. The global auto market is estimated at $2 trillion and Tesla's market cap of $680 billion is about investors giving the company credit for capturing a lot of it before it ever happens. Tesla only produced half a million vehicles last year compared to an industrywide total of 70 million produced.

One reason Tesla could be getting so much credit is autonomous driving. The company had logged about 3 billion miles of data from its vehicles this time last year. That data is the key to training machine-learning algorithms. It's about 150 times the 20 million captured by its closest rival, Alphabet's Waymo. Also compelling is the company's debut of the Tesla Semi. This electric tractor-trailer will take aim at the $4.2 trillion global trucking market. If Tesla CEO Elon Musk can transform the worldwide fleet of tractor-trailers into an autonomous freight hauling network, investors would need to add in the $600 billion global railroad industry as a potential market opportunity.

It could all happen, but it will require a lot more time and investment than most investors are willing to allow. Even Amazon, which was an obvious success by 2010, has seen shares fall by 30% on four occasions in the last decade. Amazon stock even fell 90% for a time in 2001. Investors are patient until they aren't, and it wouldn't surprise me to see a similar shakeout for Tesla shareholders in the next market crash even if the company is ultimately successful.

Elon Musk: Is he P.T. Barnum or Steve Jobs?

The second reason has to do with Musk. I've read articles comparing Musk to P.T. Barnum and to Steve Jobs. It isn't difficult to see him as the embodiment of both. What worries me are the actions and decisions he's making that seem less mature than a typical 49-year-old CEO, even if he is one of the world's richest people. Don't get me wrong, I enjoy the billionaire thumbing his nose at convention as much as anyone. However, after he made a questionable acquisition of his cousin's solar roofing company in 2016 and settled fraud charges with the SEC in 2018, investors should have an expectation of more responsible behavior going forward.

Instead, Musk continues to stretch the boundaries between fun and market manipulation on social media, and he is adding unnecessary fuel to the argument that he's just as interested in trolling the establishment as he is in running Tesla. Further proof over the past few days came in the form of a tweet supporting Dogecoin -- a cryptocurrency that was started as a joke based on a meme where a shiba inu dog is called a doge -- then a tweet hinting at buying a cryptocurrency called Shiba Inu, when confused investors mistakenly traded it higher in response to the Dogecoin tweet. Now, the billionaire funnyman has changed his official title from chief executive officer to "Technoking of Tesla" and that of his chief financial officer to "Master of Coin."

Not just other people's money

For all the shenanigans, most critics seem to miss two very important facts. One, Musk is brilliant. He has now been either founder or first investor (he didn't actually start Tesla) of three companies that redefined industries: PayPal Holdings, Tesla, and SpaceX. Second, he is not an incrementalist. After taking the riches he earned from the sale of PayPal and plowing all of his money into Tesla and SpaceX, he ran out of cash. Luckily, he secured a Department of Energy loan to keep Tesla going. That is a mentality that not many people possess, and it leads to drastic outcomes. Sure, the automaker could have gone bust, but he was willing to go essentially all in with it.

Famed investor Warren Buffett likes to say there are no called strikes in investing. You don't have to swing at every pitch and you don't have to come to a conclusion on every company. That's the main reason why I'm not a Tesla investor and probably never will be.

Despite a once-in-a-generation entrepreneur and more and more evidence that all forms of transportation are included in the company's addressable market, it's pretty clear that Musk likes to make big, potentially dangerous bets. So far they have worked out, but the line between being unconventional and being irresponsible is often hard to distinguish. I'll root for the company and enjoy the trolling, but I can't bring myself to buy shares in a company so dependent on one person, especially when that person is so unpredictable.