In a one-two punch to the gut, ViacomCBS stock gets double downgraded.

Shares of broadcaster (and over-the-top streamer) ViacomCBS (PARA 1.30%) tumbled 10% through 11:45 a.m. EDT Wednesday after two separate analysts downgraded the stock within hours of each other.

First to downgrade ViacomCBS today was Australian investment bank Macquarie. StreetInsider.com reported today that Macquarie cut ViacomCBS stock to "underperform" with a $78 price target, but gave no further details on that move. But separately, BMO Capital downgraded the stock -- also to "underperform" -- and on this one we do have some detail.

As TheFly.com reports, BMO downgraded ViacomCBS on worries that the company's rebranded Paramount+ streaming service (which used to be known as CBS All Access) is set to face a double whammy of difficulties. On the one hand, the more vaccines roll out and the lower coronavirus infection numbers go, the less homebound consumers will be -- and the less television they are likely to watch.

At the same time, there's greater competition brewing for those TV watchers who remain as Comcast's (CMCSA -0.02%) Peacock streaming service gains steam and offers "differentiated content like the Summer and Winter Olympics in the next twelve months," reports TheFly.

Both those factors are likely to weigh on ViacomCBS' numbers in the short term. And in the longer term, BMO believes the company will see declines in licensing revenue (as it brings more content in-house and therefore necessarily syndicates out less content). 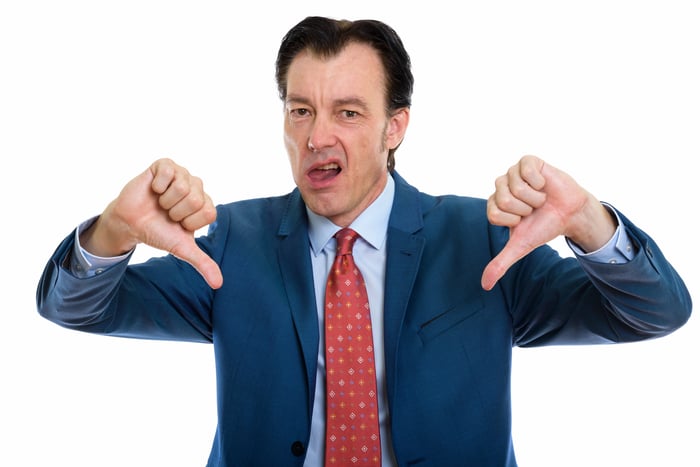 On top of all this, BMO says ViacomCBS stock has just plain "run too far" and climbed too high -- and whatever you think about the analysts' other objections, it's hard to argue with this one. Up nearly 700% over the last 12 months, at a recent valuation of $60 billion, ViacomCBS stock costs 25 times trailing earnings and 30 times trailing free cash flow. Factor in net debt on the company's balance sheet, and those numbers rise to nearly 33 times earnings and 40 times FCF.

Suffice it to say that seems a bit rich for a company expected to slog through low-single-digits profits growth over the next five years. When you consider that, I suspect these analysts are right to suggest it's time to take profits and sell ViacomCBS stock.